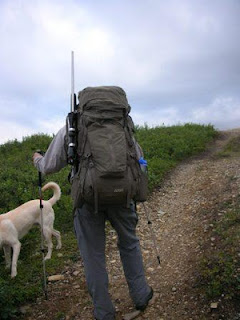 As promised to several readers who've contacted me regarding the performance of some of the new gear I acquired this year...

Not a detailed "gear review" per se but rather a collection of impressions I've developed using some of this stuff in the field over the last year. I generally don't like to develop strong opinions about an item until it has stood the test of several seasons. So with that caveat out of the way- bear in mind that long term durability is something of an unknown for several of these items.

Bibler Fitzroy Tent- quite expensive at full retail but generally obtainable for much less, this is now my standard for mountaineering tents. I didn't have any condensation issues over the summer and it survived a 60mph blow and torrential rain on my sheep hunt with barely a rattle and nary a leak. My only criticism is that the vestibule design seems like an afterthought but its a bad weather bunker worthy of its asking price. Kind of heavy by today's ethereal standards, its also durable and worth it's moderate weight. Two thumbs up!

Western Mountaineering Badger Sleeping Bag- also expensive at full retail and quite hard to find for less. Extremely warm and roomy for it's remarkably light weight. Despite the disadvantages of down when encountering water, I've become something of a down bag convert. It packs down unbelievably small, which is one of the main disadvantages of a synthetic. It is also good right down to the rated temperature, which is something of a rarity in sleeping bag manufacture these days. As long as you're up to the minor task of keeping it dry, two thumbs up!

Kuiu Icon 6000 Pack-  I was attracted to many pieces of the Kuiu line during their introduction and this was what I hoped to be the "crown jewel" of their product line. A serious hunting pack that didn't start off weighing 10 lbs empty but could carry remarkable loads. The carbon fiber frame had my mouth watering and the feathery weight sealed the deal. After a couple of encouraging day trips I slogged it into the mountains with a true week's load...and that's when the fun stopped. The frame pivot squeaks despite frequent lubrication and the straps slip and release under load. On our pack out in the rain I resorted to tying the "tail" of the straps in a knot as I could actually watch them slide while I hiked. A call to the company has not resulted in customer satisfaction with a couple interim fixes and an as yet undelivered promise of new straps. Company reps say this issue didn't show up during internal beta testing but every one with one of these I've talked to had the issue within a few hours of donning any respectable load. I still have hope because I want to, but at this writing- two thumbs down.

Kuiu Attack Pants- as disappointing as the pack was, the pants are equally as excellent. I've used and abused my pair for months and they are still going strong into cross country ski season. Water resistant, quick drying, comfortable as pajamas for a really reasonable price these are likely my favorite piece of new gear. Its quite likely Kuiu ought to stick to clothes given how good these are and how hard they are to obtain- the company is perpetually back ordered on these. Two thumbs way, way up!

Kuiu Chugach Rain Gear- named after the Chugach Range in Alaska, which is also the farthest northern temperate rain forest appropriately enough these worked pretty well. Fairly light and packable, they kept me pretty dry in some real torrential rains. Deeply skeptical of any rain gear advertised as breathable, they do live up to their claims. I also don't think they're worth the considerable asking price despite being in line with competing products. I had one of the cuff tabs delaminate on the first wash. The jury is still out on how long they'll retain their water proof integrity. A thumb down (value for money) and one thumb up (performance) at this writing.

Lowa Tibet GTX Boots- I picked these up on deep discount at a specialty hunting retailer in Fairbanks last year and the price was still heart stopping. That said, I'd buy another pair at full retail tomorrow if I needed them. It took a hundred miles to even break these in and the boots have unreal amounts of support and torsional rigidity only rivaled by rigid plastic mountaineering boots (which I find miserable for hunting). They are incredibly comfortable and have held up to a full year of wear in every conceivable condition from steep talus slopes to slogging through bogs. A pair of boots this good is very hard for me to find. Two thumbs way UP!

Nosler 48 Rifle- I've written about this rifle a couple years ago and the more I use it the better I like it. I had a safety fail this year just a month prior to my hunt and the Nosler folks got to flex their customer service muscles. They sent me a UPS label and I put the rifle on the truck with little hope of seeing in time for my hunt. Just 8 days later it was delivered back to my home with a new trigger, safety and a note that wished me luck. Their customer service was simply superb and they've offered me a refinish on the stock if I send it in for a recoat of the barreled action. It didn't hold up to their expectations (although it held up to mine) and they've offered to refinish it- given the beating I've given it I'm surprised the finish has held up at all. On the practical side, I've now shot several critters with the rifle and everything has pretty much died in its tracks. Serious riflemen need to look at this rifle with significant consideration and acquiring one is well worth gutting your collection of lesser pieces if you value field performance. Two thumbs up.

Wyoming Saw and Knife- field dressing tools that were a gift from my wife. Affordable, simple and effective- what more could you want? The saw is handy and sized for backpacking with wood and bone blades included and the knife, despite its unusual design, is likely the best skinner I've ever used for big game. My sole criticism is that the sheath is camouflage...which seems silly given its purpose. Nevertheless....two thumbs up!

Black Diamond Trekking Poles- fairly light and compact as well as expensive. One folded up and collapsed on me while descending a dangerous slope; at least contributing to a nasty fall and painful injury. They may be fine for effeminate Euro hikers but manly hunting men bearing manly hunting loads need to look elsewhere in my opinion. Two thumbs way down...

Minus 33 Merino Wool- the intermediate layer is excellent, warm, stink free and much recommended. The lightweight T-shirt, while warm and stink free, is much to fragile to wear as an outer layer. Both of mine developed numerous holes and loose seams. One thumb up and one thumb down.

I've bought other pieces of gear but either I've not used them enough to get a good feel for it or it was something so unremarkable it doesn't warrant writing about. So despite the claims of every manufacturer the age old adage of caveat emptor is still much in force.
Posted by hodgeman at 11:15 AM 1 comment: