Summer is finally here! One of the great joys of living in the North is that spring isn't a season. It's more akin to an eruption...

Just two weeks ago we still had considerable snowpack on most of the ground and it didn't even remotely feel like spring and was probably worse than what most of the nation calls winter. Today, only deep shade will contain the remnants of winter with daytime highs into the low 70's and cold is only a memory. Our little community lost its collective mind and everywhere you go people are out and about on foot, bikes, motorcycles and ATVs and generally having a bout of Spring Fever. Sick calls at work rival the numbers achieved at 50 below.

This is the time of year we live here for!

I've not found it in me to write much and I've spent lots of time outside hiking and teaching my son to ride his bike. I've been bear hunting quite a bit in the evenings looking for sign and scouting areas with the elusive south facing slope warmed by the sun. Our official dusk is after 10:00pm so I've got plenty of time to scout during those productive evening hours.

I've also been poking around in the yard a bit trying to spruce things up a bit and recover articles from the melting snow. I've also received my first mosquito bite of the year as the early season "bombers" fly about. Funny thing is the early 'skeets are huge and slow flying and although they're big they're not so bad as the late season "fighters" that are quick, vicious and come in incredible numbers. Nothing quite like sitting on a tree stand while these big monsters come flying by- sometimes I think Fish and Game ought to sell tags and open a season.

I hope everyones summer is getting off to a good start.
Posted by hodgeman at 8:06 PM 5 comments: 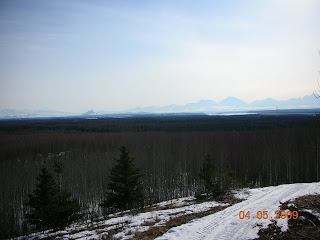 OK, I've waited long enough. I'm calling it- Spring is finally in the Interior. A week solid of above freezing daytime temperatures and a snow base that is rapidly disappearing. Even on Easter morning at 6:00am my thermometer showed a robust 35F.

I've been working on prepping for spring bear season with a new hunting partner and one old one and we are getting excited. Pouring over maps, scouting new areas and searching the newly sunny hillsides for fresh tracks (getting my pickup hopelessly stranded in the soft,slushy snow in the process). After a very disappointing fall season, the spring bears offer an opportunity to get out and get some great hunting in with some reasonable temperatures. Our goal this year is to hunt one of the more elusive creatures in Alaska- mature boar black bears. These animals are relatively easy to hunt in South Central with its wide open south facing slopes where spot and stalk is a good method to get bears- not so in the Interior with our miles and miles of flatland boreal forest. These reclusive bears inhabit this terrain and the hunting is generally performed by stand hunting over bait, scents or more rarely predator calling.

I attended an Alaska Department of Fish and Game conference last week with a friend that gave some instruction and (oddly enough) encouragement to use bait stations for targeting black bears. I've always looked down my nose at baiting for bears in the past but I have to admit the biologist gave some compelling reasons to utilize baits. Apparently only mature boars target moose calves while the much smaller juveniles and sows concentrate on more vegetarian fare. ADF& G is on a dedicated mission to improve moose numbers in several portions of the state and part of that mission includes reducing predators. Within the black bears' thick habitat and given a select population that predates moose- baiting makes some practical sense given it slows down the hunt and allows for plenty of time to evaluate the bear you see. Basically the hunter places a large container of food materials in the woods until the bears recognize it as a reliable food source (usually several bears simultaneously) and then the bait is hunted over until the bear you want comes in to feed.
Then you feed.
Well that's the idea at any rate.
I also learned a great deal about scent attraction hunting by using several methods of natural and artificial scents distributed on the breezes. Several hunters report excellent results with "honey burns", "marshmallow fires", and "beaver buckets" that rely on powerful attracting odors without maintaining a 100lb drum of dog food and jelly doughnut filling in the woods for a month. Its much simpler to execute and reasonably successful for target bears. I'm leaning heavily toward this method as I have reservations about feeding a group of bears until basically habituated. Honey and anise burned over a camp stove or low fire are reported the best natural scents used, especially near water sources at dusk. When you leave the scent dissipates without residue. Apparently this method is considered baiting for enforcement purposes and requires all the administrative hoops of the other methods although they aren't unreasonable.
Most spot and stalk hunts are over with the first reasonable shot presentation and more than one hunter has experienced "ground shrinkage" when his huge 7 footer turns into a 130 lb 4 footer juvenile as soon as he walks up on it. Or (God forbid) a lactating sow with no cubs in sight. Calling yields similar results with bears of all shapes and sizes charging into the call ready for action- the shooting tends to be spontaneous and very fast.
Not exactly my idea of a good time.
Calling in a fox or coyote is one thing, a 500 pound grizzly is another matter entirely. So the jury is still out on whether I'll give baiting a try or whether I'll pursue another method but I'll certainly be looking for some smoked black bear hams for my summer barbecues. Wish me luck and with any of it I'll post some pictures of success.
Or without, another (hopefully) interesting tale.
Posted by hodgeman at 10:08 PM 4 comments: 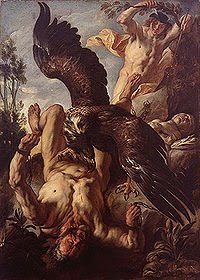 "And there Prometheus sat chained upon the rock by Zeus, continually assaulted by the eagle for his sin of giving man fire. As he gazed down upon the earth the fires of men revealed his reasoning was sound as he heard the sound of men rejoicing among the smoke."

Prometheus having his liver eaten out by an eagle. Painting by Jacob Jordaens

During a water cooler session last week the gang at work was discussing campfires in general in anticipation of the upcoming camping season. Winter is giving us it's last gasps and we are all looking eagerly at the sunshine and thermometer and biding our time. We discussed all kinds of items regarding campfires from cookery, to heating, to great memories of spending time around one, even to amorous interludes on fire lit beaches (the jury is still out as whether that was fact or fantasy but we're giving my coworker the benefit of the doubt.) In short, it was readily agreed that a camp without a fire was like St. Paddy's day without beer or a birthday without cake.

Except for that one.

That "holier than thou" type who thoroughly let loose on us primitives for our love of pyrolysis. Unless I'm camping above the tree line I can guarantee one thing- there will be fire in my camp. I'm a reasonably intelligent guy who understands a few things and I abhor garbage anywhere but particularly in the wilderness and as a rule haul out more than I haul in. I also tend to have a high level of respect for the environment in that I refuse to destroy terrain features and avoid cutting living trees whenever possible and keep a generally tidy camp in all respects. But the line is firmly drawn when I cannot make a fire in my camp. I understand the ethics of leave no trace and its my position some traces are inevitable and more desirable than others.

It is my not so humble opinion that a camp without a fire is a dark, damp, cold and generally cheerless place where one would go to suffer rather than celebrate. A tight tent, a cheery blaze and a percolating pot of coffee is the most welcome sight at the end of the day during fall moose season and there might even be a slice of backstrap, or a salmon, or a fat trout on that fire if the day has been especially good. In the morning, the smell of woodsmoke and bacon go so well together that I argue they were made for each other. Even coffee tastes better with a sprinkle of ash in it. Those of you in the know- understand every word I've just spoken.

I understand that a lot of backpackers and other wilderness users don't generally like fires and sometimes hunters will cold camp for reasons that confound me but most humans take to fire like a duck takes to water. I also understand that certain areas (Appalachian Trail comes to mind) sustain such high use that fires are simply impractical as there isn't enough dead fall to fuel them. But for all that, fire does something for a human being. Its one of the most comfortable things in the wilderness and our mastery of fire is one of the things that sets our species apart from all others. Arguably fire is the earliest form of technology applied by mankind. Why all of a sudden this disrespect for fire? Would Prometheus suffer for nothing?

Some of the reasons cited included "trashing the wilderness" in the form of fire rings and "habitat destruction" in the form of burning dead falls and even "pollution" in the form of smoke. But I must confess I think the reason is pure obstinacy. Folks like to think they are leaving no trace when they abstain from fire but that's not exactly true. That environmental impact is simply deferred. That spanky backpacker stove runs on something and that something is generally alcohol (methanol mostly made from wood and a damned lot of it) or compressed gases (generally isobutane or LP) from such a gentle source as an entire petroleum refinery. Compared to a petrochemical plant my tiny fire is practically benign in environmental impact.

Point being that "leave no trace" is an impossibility for all manner of creatures but unlike a grizzly who'll excavate a house foundation size hole to eat a ground squirrel, humans have some kinda choice on what type of footprint we'll leave behind. It's my position that a properly managed campfire is treading pretty lightly on this earth when all things are considered.
Posted by hodgeman at 10:44 PM 3 comments: