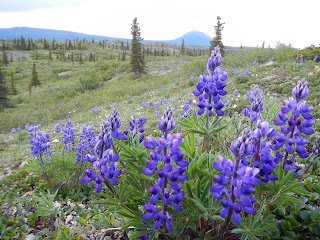 Yesterday my wife and I decided it would be a great time to take the ATV out for a ride and look for some animals to photograph. I've been messing around with some techniques to use our small digital camera and my spotting scope as a kind of "redneck telephoto lens" to photograph animals in the field with varied results. Taking opportunity while our son is away at camp for the week, we loaded the ATV, some sandwiches and our usual gear and headed just a few miles south to the trailhead.

We ignored the sporadic rain and headed back to a well known drainage that I had hunted before and was certain we could find some animals to photograph as well as take in the outstanding scenery. We loaded our Labrador, Sonny, in so he could get some much needed exercise as well. It turned out to be a fortuitous decision.

We took our time in meandering several miles up the ancient mine track into the high country and the river bottom black spruce forest gave way to alder bands and finally above tree line to a variegated terrain of broken tundra and brush. The preferred home of the caribou...and the grizzly bear.

After a few short moments with the spotter we spotted a lone bull caribou, at least a mile distant feeding on a slope. In the summer months the caribou come up here to high country, more properly thought of as sheep country, to escape the heat and bugs in the cooler mountain breezes. This bull was feeding unconcerned out in the open tundra. We quickly began to use the camera to photograph him with a mix of results through the spotter. Eventually we got OK shots, although it was finicky to do and not so hot when compared to shots taken with proper (read: expensive) digiscopes and dedicated camera mounts. 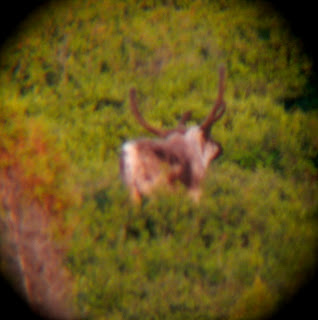 After perhaps a half hour of this some movement caught my eye as it flashed across the small LCD screen of the camera. Dismounting the camera, I quickly located a grey wolf creeping across the tundra just a few hundred yards from the caribou. Curiously, any time I've seen wolves in the past it's always been in the presence of caribou. Not actively hunting but keeping careful tabs on each other- like neighbors that don't each other for good reason. It seems where you find one you always find the other. The wolf walked into a band a dark green alders and promptly disappeared from view. I remounted the camera and waited for the wolf's almost certain reappearance on the other side....except, it never happened. We patiently waited for the wolf for perhaps five minutes when finally my wife had an idea. "You know, I'm going to howl like a wolf real long and loud. It's a long way but the wind is blowing that direction so maybe it will hear me.", she said. Despite the comedy aspect of my wife raising her head and letting fly with the longest, saddest most forlorn imitation of a wolf I've ever heard...it got results.

About thirty seconds later our beloved and generally gentle Lab gave out the most determined and fierce bark I've ever heard him make. Not the usual "Gimme Attention" or "I Gotta Pee" bark but a genuine cry of pack distress and warning. He charged about ten yards behind us and stopped. Growling menacingly he stood ready for action- chest puffed out, hair erect, tail arching forward and was staring intently at the brush that lined our back trail. Knowing that such behavior from our dog was both unusual and intent we gave up our spotting and starting looking for what could be the matter. My wife stood on the floorboard of the ATV to gain vantage of the sloping terrain from our rise and I slid the rifle from the scabbard and worked the action to chamber one of the fat .375 rounds.

Very soon out of the brush walked a large boar grizzly and his intent was pretty obvious- he was coming in to my wife's wolf call at a rapid clip. I don't know how far he'd travelled but a bear will often come in from great distances to calls in hopes of scoring an easy meal. He was just a hundred yards distant and knowing a bear can charge that in mere seconds I snapped the rifle up and settled the forward bead in his chest. Too far to shoot with a coarse bead on a moving target and the element of near total surprise on his part. At this point the commotion of the dog's fierce growls and barks and my wife's shouts stalled the bear....this wasn't what he expected to see making a wolf howl. 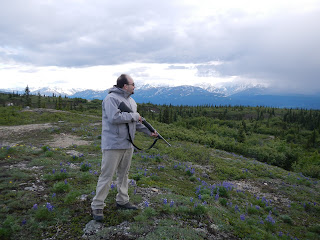 He paced agitatedly back and forth looking for our scent to figure out what odd creatures he'd stumbled into. He was dark chocolate with a silver tipped back and prominent hump shoulder. I covered him with the rifle, ready for instant action. The rifle was a .375 carbine sporting coarse sights with a wide shallow "V" and a big front bead. Not exactly ideal for a hundred yard shot on a dangerous critter but ideal for a snap shot on a charging one at close range. What would have been an easy shot with a scoped rifle was looking daunting given my rapid heart rate and the adrenaline surging through my veins after being taken by surprise. Grizzly season was open and I determined if he approached closer I would make the shot with the powerful rifle. I had much confidence that a 300 grain bullet would do the job on the bear and I must admit that the larger rifle gave me a sense of confidence I wouldn't have had with any of my more accurate but smaller pieces. Grizzlies will often make a guy believe in bore diameter and little else.

He paced for just a few moments more and decided the queer and unusual creatures making all the noise weren't worth the hassle and the last I saw of him was his butt romping into the alders on the far side of the trail. An exasperated gasp was followed by laughter. Cooper's opinion that "the spice of life is not variety but peril" certainly felt true at the moment. We cautiously worked our way over to where the bear had disappeared. His exit path was marked by several long deep pug marks in the hard trail surface. I measured one briefly with my hand- 7" across. By no means the largest Interior grizzly I'd ever seen but a respectable specimen at any rate. We left the area slowly, scanning the entire time to see if the bear would work it's way around and get downwind of us. Sonny at one point began an excited bark and growl that quickly diminished as he walked over and urinated on the bear's tracks...what bravado from the macho dog! 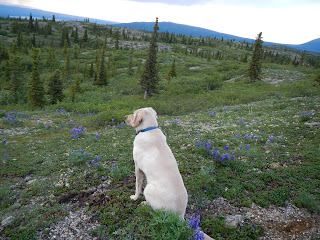 The lesson to the bear country traveller is one that is well worth remembering....every so often it pays to check your six and pack along a canine companion of reasonable fortitude as well as a rifle of substantial power.

Meanwhile, Sonny has been promoted to Head of Trail Security complete with a pork chop and my wife's grudging acceptance has turned into an uneasy admiration for his successful response to Mr. Bear.  I, for one, was very happy we were alerted to the bruin by Sonny's keen nose and not by the bear running into our midst from behind.

Well the first thing you need to do is catch a king salmon....then reduce it to manageable bits. Starting like this... 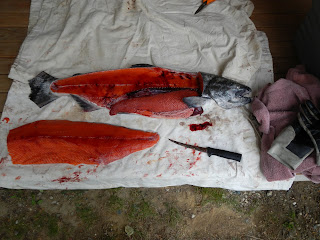 The you reduce it into a bit more manageable portions and pack it into cure and let it ride overnight in the ice box. There are a lot of cure recipes out there....I like brown sugar and salt, simple and clean. When you take it out to let the pelicle cure it will look a little like this.... 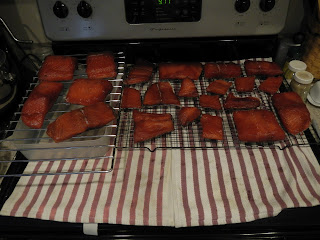 After a few hours to let the pelicle harden, load up the smoker with some soaked wood chips...chip choice is slightly academic but I like hickory. 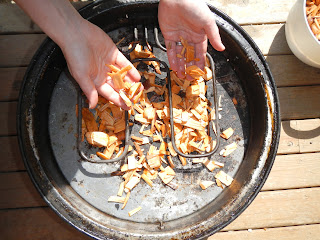 Load up the cured fish in the smoker and let it go low and slow for several hours...thick slabs of king salmon need about four hours. 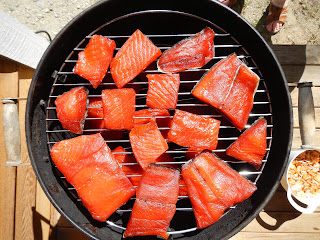 During that long interim....go to the Internet and look up Hank Shaw's wonderful morel mushroom risotto recipe. Then get out and hunt some morels at that secret patch you know about...here it is. 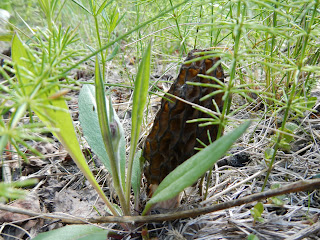 After you pick a decent mess of those. Rummage through the herb garden and get some fresh herbs for the preparation. Nothing fancy....but it isn't required. 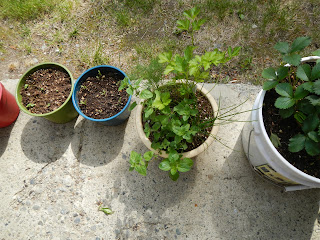 Fix the rice preparation according to Hank's recipe and it comes out just fabulous...like this! 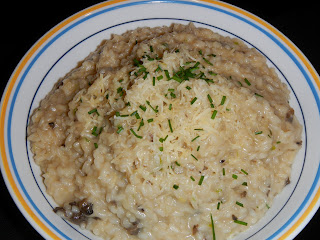 Serve up the warm fish with the rice prep and the two flavors go incredibly well together....sweet, salty, smoky fish with the subtle flavors of the rice and morels.....

So good I forgot to take a picture of the plate! 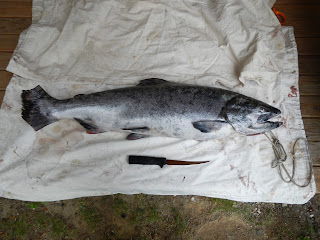 The dip net opener occurred last week, and while the fishing wasn't as hot as I'd have liked despite record returns on the Miles Lake sonar, I did manage a pretty nice King Salmon or perhaps, more appropriately, a Chinook.

The largest of the Pacific salmon, Kings in the 40-50 pound range are pretty common and prized for their delicious flavor. I was fortunate enough to land this one in the midst of some truly dismal fishing on the Copper River. As I type this, I've filleted this one and have eaten a portion fresh on the grill, frozen a filet, and have the rest in brine waiting to be smoked tomorrow. This one, along with a half dozen Red Salmon I managed to catch, isn't going to last the year but it's a good start. The limit on Kings is but a single specimen so I'm all done for these but I've still got a long way to go to fill my tags on Reds.

More fishing to come...
Posted by hodgeman at 11:50 PM No comments: