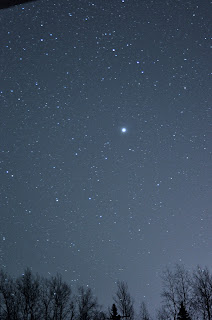 The presents are open, the dessert enjoyed, the roast beast sliced and served.
Friends came and went and back again with gifts and fellowship and tidings of joy.
Phone calls and messages to and from distant family- goodwill over long distance.
Dishes done and put away, wrapping papers picked up, little boy tucked into his bed.
Now just enjoying some quiet time.
Peace on earth....peace in me.
Merry Christmas.
Posted by hodgeman at 9:38 AM No comments:


I was contacted a few months ago and asked if I'd be willing to review a new book titled "Girl Hunter:Revolutionizing the Way We Eat, One Hunt at a Time"...

How could I pass that up?

So I told the publishing agent that I'd be glad to review the advance copy of the book. I've got to say that I enjoyed the book quite a bit...kind of a mix between Steve Rinella's American Buffalo meets Michael Pollan's Omnivore's Dilemma.

The resulting dish was really quite good and the book centered around a series of hunting adventures about the country on which she endeavors to kill game and then cook that game into meals. The recipes sound excellent, if a bit complicated for my rural taste which runs more to Neanderthal than Tres Cheval. I have a nice batch of grouse and ptarmigan in the freezer that practically begs to be used in a special meal using one of the recipes from the book. I'll keep you posted on how that turns out.

Perhaps more interestingly to me are the other characters in the book- ranging from Berkley liberals relo'd to Montana, to a driven shoot on an English estate, to hunting with the wealthy and politically connected good ole boys of Arkansas. Each hunt was something quite unique and entertaining with the exception of the creepy and unsuccessful elk hunt that centered on her interaction with a free range beef rancher and apparrent attempts at wooing Ms. Pellegrini via poaching. Without a doubt- Ms. Pellegrini runs in better heeled circles than I.

But I've got to be a bit truthful...I enjoyed the book on its own merit but the embedded video trailer portrays a huntress with a different voice, attitude and approach (as much as I can tell from a 1 minute video anyway) than the one I read and admired in the book. Where will it all go? I can only assume with a video trailer a television pilot probably is already on the reel. Since my exposure to television is limited I can only hope the thoughtful hunteress doesn't go from a Pollan meets Rinella writer to a Nugent meets Rachel Ray television personality.

Time will tell, but the book is certainly a worthy read.
Posted by hodgeman at 7:48 PM 1 comment:

I've longed wanted to write a piece on the emotional aspect of hunting and killing for food; but the effort usually results in something I'm not happy with. I'm frequently asked how can I stand to kill, or field dress an animal. I'm usually articulate enough in person to have a coherent conversation about it without sounding like a defensive hillbilly but my efforts in prose fail me in that regard.

In the meantime, meander on over and read this wonderful piece by Hank Shaw at Hunter Angler Gardner Cook.
Posted by hodgeman at 10:33 PM No comments: