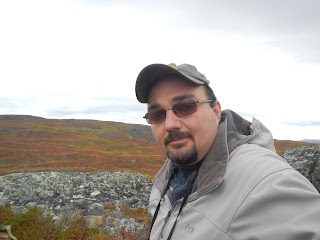 Among the many blessings that I've received, I'd like to thank my readers- the folks who pull up a digital camp chair to the fire and listen to my ramblings with attentiveness and encouragement. The folks who correspond with me about my passions- the outdoors, hunting, fishing, geeking about rifles and equipment- it's that interaction that allows me to extend my adventures long past the actual event.

I'm also thankful for those who share their adventures with me. Those who allow me to tag along on vicarious adventures to places I'll likely never go, to see things I'd never see on my own. The folks who patiently answer my questions in my efforts to not just spectate- but to understand. It's these folks who make this whole blogging endeavor worthwhile.

So in conclusion- Thank You.

Hodgeman
Posted by hodgeman at 12:04 PM No comments: 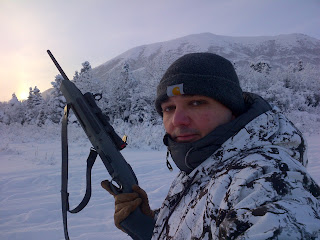 Sorry folks for the lack of posting...lots happening lately, most not worth writing about with a few notable exceptions and this is one of them.

In what seems like an eternity ago, my good friend and compadre' Ghillieman burst into my office for a friendly visit bearing the latest copy of some gun rag. There, featured on the cover was the long awaited creation of gun guru and Renaissance man Col. Jeff Cooper- the Steyr Scout Rifle. I'd been awaiting seeing one for some time and had followed it's development in the pages of Guns and Ammo for several years. If memory serves, it was some time in spring1998.

"We've got to get a couple of these...", remarked Ghillie. That remark set us on a course of motion that had me trading in most of my gun collection in those days of more meager means. Ghillie sold off a few pieces and the following week we placed a couple on order with our favorite cash depository (ie. gunstore). The wait seemed like forever but a few months later the guns arrived and we set out to shoot these things to death. I didn't hunt as much back then but used the rifle on several successful hunts and while it drew funny looks and more than a few snide comments- I was shooting better than ever with this odd looking rifle. I took several whitetails, including one at the long range of 275 yards. I took it on groundhog duty and shot many of the nuisance critters to embarrassing distances. I took a rifle class and   even though every other participant was equipped with some form of autoloading military derived rifle, at the end of it I held top gun in every category except missing fast. I truly believed that if I could see it, I could hit it. I credit the time I spent with that rifle to putting me well on the way to becoming a real, honest to God,  rifleman.

Time waits for no one and after a few years of joyful shooting I had the opportunity and desire to relocate to Alaska. The Steyr (along with almost everything else I owned) was sold off to finance that move. Of all the rifles I've had over the years, that Steyr was one of the very few that I regretted parting ways with. I made a couple of half-hearted attempts to replace it but ultimately never could close a deal. Steyrs are pretty hard to find most places and even more so in Alaska. Rifles of this quality are never inexpensive but when made by Austrians the cost gets just outright prohibitive to some.

The intervening years went by and one day recently I received a call I never expected.... Ghillie called and asked if I'd like to buy his Steyr in order to relieve some economic distress that long periods of underemployment tend to generate. Given it was a friend in need I (of course) agreed before the price was even discussed. I'd have simply sent a check if one had been asked for outright, but honorable men don't readily do that. Honorable men also don't make off with their buddy's prized possessions in exchange for cash either, except in the direst of circumstances. In the words of Cooper- "The Queen (referring to a favorite rifle) is not for sale. Given, loaned, borrowed, exchanged sure- but not sold." So an agreement was struck- I mailed the check and would take the rifle adventuring. When sunnier fiscal times arrived the arrangement could be reversed at his discretion and honor maintained all around. 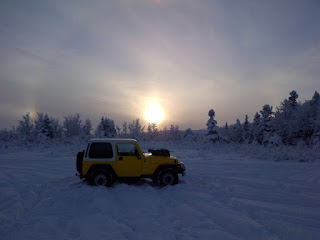 After a long wait I finally got the rifle to Alaska and it was even more special than I remembered. The skills I acquired in the years intervening revealed details on the rifle I'd not appreciated previously. After several weeks of workday drudgery and fierce weather, I was able to take the rifle shooting. I planned to do a couple of things at once- first, evaluate the Steyr as a hunting weapon compared to a conventional bolt action rifle and second, evaluate some of Remington's "Reduced Recoil" ammunition. The light and diminutive Scout would be perfect for the second purpose. Recent winter storms had dumped several inches of snow in the last week and the day's temperature was a brisk -21F, neither of which were ideal range conditions for testing anything other than harsh environment resistance on part of the rifle and the shooter!

I placed a target at the hundred yard mark (110yds actually) and trudged through some deep snow back to the firing line. I used the Scout's bipod and nestled in behind the rifle and ran into the first snag- an 18" drift of snow midrange totally blocked view of the target when prone. Frustration. Given the short daylight, I simply turned my jeep perpendicular to the shooting lane and would shoot "jackass prone" over the hood. Not as accurate as true prone- it can be surprisingly good provided you don't inadvertently blast the paint off the hood. 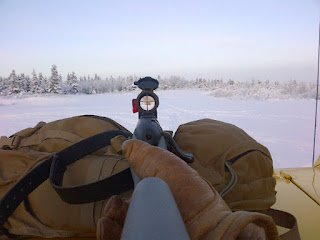 I loaded 5 rounds of plain-Jane .308WIN Remington CoreLokt 150gr ammunition rated at 2820fps in the magazine. I settled in over a pack layer across the hood and at the last second removed my glove. I took a careful sight picture and noticed the thick Leupold crosshairs nearly obscured the target dot so I concentrated carefully and squeezed off a round. I looked through the binoculars and confirmed a hole gratifyingly on the 1.5" target sticker and proceed to fire four more rounds. I was pleased as punch to discover a tight group of 5 on the mark despite the loss of feeling in my trigger finger. This critter was ready to hunt!

For the next test, I loaded 5 rounds of Remington Reduced Recoil which features a 125gr bullet at 2660 fps and claims a 50% reduction in recoil. Big Green also advertises these rounds shoot to the same point of aim out to 200yds as their other ammunition. To say I was skeptical on both points is something of an understatement. After warming my hand up beneath my parka I sighted in on the next target and squeezed carefully. Bang! I was surprised by the loud noise but little recoil I experienced. A quick check with the binoculars showed a neat hole in the 2" circle. Wow. I fired the remainder of the magazine into the target and had a group that was slightly larger than what I'd fired with the conventional powered ammunition. About 1.75"- not a stellar group by today's standards, but certainly acceptable given the range limitation of 200yds and the fact the rifle is zeroed for an entirely different weight of bullet and stills hits to POA. 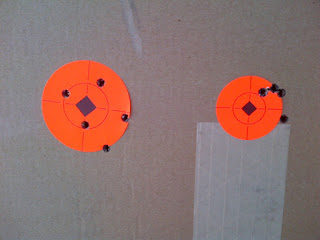 Photo above- the left group is Remington Reduced Recoil Ammunition. The right group is conventional 150gr Remington CoreLokt ammunition. No adjustment to the scope zero was made between groups.

Without lab type equipment I can't validate the claim of 50% but I don't doubt it. Recoil was much softer than conventional ammunition and I would hazard the the kick was about on par with a 22-250 or .243. Very soft shooting for a lightweight .308WIN and perfect for anyone who's recoil shy- which is why I bought it to start with. Not myself, but for my 11 year old son who is a beginning and enthusiastic hunter looking to drop a caribou. This combination should make a very nice piece of equipment for such a purpose. I don't know if the POA/POI will be an equivalent in every rifle but it would certainly be worth a try if you have a budding hunter as your ward. Regardless of which ammo was used the next rifle recoiled much more severely.

Next, I took my beloved .300WSM out for a comparison to the Steyr. This rifle has been my main hunting rig for several years and is a rifle of known accuracy. The rifle is in theory a .75MOA rifle with a 3-9x Zeiss scope and Nosler custom ammunition and should shoot circles around the Scout. I loaded the internal magazine and fired three shots at the next target. The group was bigger than I expected- I've shot much better with the rifle. I can only attribute it to my freezing fingers, the impromptu rest, or the fact that in the frigid air my breath was landing as a thin layer of ice on the ocular lens with each exhalation. Another three round string and the group size was about the same as the Steyr's- 1.25" but by the last shot the target was significantly obscured by the ice. The Steyr with it's intermediate eye relief scope mounted forward didn't accumulate any frost at all despite spending more time behind it. Significant when hunting in Arctic conditions? Could very well be. 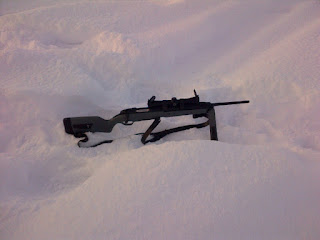 Conclusion- the Scout is a very well thought out rifle with more than acceptable accuracy for hunting with either load I tried. It's forward mounted scope is a great feature for hunting in extremely cold weather. The Scout is also a very "handy" piece- well balanced and thought out. It's hard to describe but some rifles just carry and hunt much friendlier than others and the Steyr gets high marks in that regard. Despite our proclivities to talk in circles about benchrest accuracy, the truth is that with either rifle with any load I fired today a big game animal within practical shooting range would have been in significant trouble. When fired under challenging field conditions the limiting factor on accuracy was me- I couldn't leverage the superior accuracy of my .300 to fire a better group than with the Steyr and could barely better it's secondary load. Chalk it up to "practical accuracy" vs. "intrinsic accuracy".

Bottom line- cabin fever is relieved, shooting is fun, and I'm darn thankful I get to spend some more time in the field with a rifle as unique and pleasant as the Steyr Scout.
Posted by hodgeman at 8:07 PM 5 comments: