Its all about eating...

I don't know about you but I'm sick to death of catch and release fishing being portrayed as a some kind of "holier than thou" exercise. 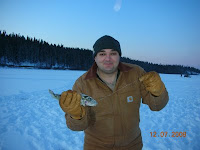 I don't fish for entertainment. I fish to kill fish. Of course I eat the fish that I kill because if fish tasted like chicken nuggets I just wouldn't damn well bother. I'm all for protecting our fisheries and such but catch and release fishing is tantamount to playing with your food. If the fishery won't sustain a harvest- then fishing shouldn't be allowed.
I had an experience recently that just reminded me of the very purity of predatory fishing and the wonderful simplicity focus thats recently been a big driver in my life. I took the family out for a drive and we happened to get out to a local lake known for its ice fishing and we happened to have enough stuff along that we could at least give it a college try. The ice was well over the safe limit for thickness so we drove out on to the ice and parked over an underwater shelf. There were a lot of folks out there fishing and I was quite intimidated by the fact my gear consisted of a hand auger and a single dime store ice rod. My tackle was a rusty, ancient hook and some very old salmon eggs. Most of the other folks had ice shelters and two stroke augers and one positively incredible looking underwater camera. I still don't know what that was for...
Not to be daunted a couple of minutes with the auger yielded a hole in the ice and a surplus canning ladle handled dipping chores nicely. A couple of eggs on the hook and plop through the ice it went.
After a few minutes of my wife giving me the "I'm bored and I gotta pee" stare sideways from her magazine I notice the rod is bouncing a bit. I pick it up and give it the slightest tug and lo and behold- a fish!
I yelled to the family that beloved Alaska term- "Fish ON!" and began to reel this thing in. A minute's work and the rainbow was on the ice. He was beautiful and perfectly sized for the skillet. My carniverous kid yelled quite loudly- "TAKE IT HOME AND LET'S EAT IT!"
A quick rap on the head and the fish was destined for the larder. I told my wife that we could go now and she gave me the "Your crazy, where are the salmon eggs" look and proceeded to plop some bait back down the black hole in the ice. A mere moment later she had another fish on the ice. Our trout sampler had grown to an appetizer and the bait went back down the hole. A few minutes later another feisty trout was wriggling across the ice. We had a full meal and it was time to go home. The temperature was hitting -8F and the family was getting hungry.
The trout yielded a wonderful meal. None of them were big enough to brag about but nothing was wasted. The flavor was enhanced by a little lemon pepper and the satisfaction that we had ripped sustenance from the wilderness. No restaurant in the world can serve that dish...

Brought a smile to my face. Hope you don't mind me adding you to the list of people and stuff I like linkages on my page.

I had a day in Africa where nobody else was catching anything and I caught 8 large bream in as much time as it took to type this, almost. One time it was an accident as I was reeling in the worm to check on it I had dropped in a deep hole in the river and I had another one of the swimmers on hook as my hook reached the surface. Honest. You never forget a day's fishing like that. Was magical and tasty.

Thanks to Mr Rasch in FL for pointing me at your pages.

It's a great Blog isn't it!