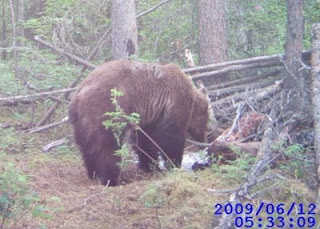 My bear hunting partner sent me a surprise in the email box this evening. For those of you who need a recap we've been pursuing bears in an area that had some really big grizzly tracks and a bait station that put the hiatus on grizzlies. Well my buddy had a genius of an idea and placed a trail camera near the now defunct bait station to see if he could get a glimpse of this elusive giant. 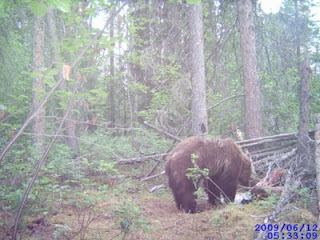 That is a right nice bear visiting the area at a bright and early 5:33AM. Long legged, lanky and big; hard to tell in the picture but presumably its a boar due to the fact its alone (no cub, either pics or tracks) and its a lot bigger than sows generally get in the Interior. I'm hoping to post a picture with some size references superimposed on the photos. I know my .300 Magnum feels smaller all the time now. Great, a rifle inferiority complex to deal with!
Here's a close up just prior to the camera getting the stuffing knocked out of it the next night. Notice the nearly human looking eye. The appearance of the bear's eye and skinned carcass gave many Native cultures the understandable respect of bears as a close relative of humans. Natives in Alaska (and the Lower 48) generally regarded the bear with tremendous respect and a source of potent spiritual power. A simply magnificient and powerful animal. 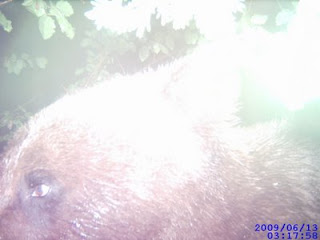 Footnote:
Sadly I'm not in Alaska at the moment to give chase to this wonderful animal. Upon hearing the news that my father had been diagnosed with cancer, my family has travelled out of state to spend time with him. Blogging has been on the back burner but I couldn't wait to share these photographs. I hope to be back to a more regular schedule soon.

Looks like this big fella will have to wait a while...

Very sorry to hear about your father! Best wishes and prayers are headed your way.

Boy, that looks like a HUGE bear to me, but all we have around here are black bears and it's hard to compare size in a bear without them being side by side or some other reference.... but that griz looks like a dandy! Maybe next year.

I'm hoping to put some size references on a photo. I've been in the area enough to know about how big those trees are but not enough to say with certainty.

When I get back to AK a visit out there is certainly warranted.

Rough guesstimate from the tracks we found would put this as a solid 8 foot+ bear and the photos show a bear of that class and maybe a bit bigger. Stay tuned.

I'm sorry to hear about your father, Hodgeman, I wish good health to him, you and all of your family.

And Great God! That's an astounding set of pictures! I'm pretty damn sure I'm not man enough to wander in country where I'd be sharing the scenery with a beast like that!