First Snowmachine Adventure of the Winter 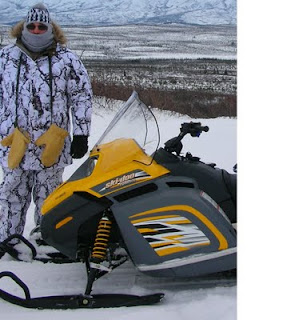 After a very long and relaxing hike with the pup today I decided to try out the snowmachine and check it out for the winter. I was concerned there wouldn't be enough snow to run the machine as we are snowfall deficient so far this year. With only a few inches on the ground I wondered how the machine would perform.

I shouldn't have worried as the Tundra is pretty renowned for its ability to run in thin snow conditions or even hard pack river ice. Other than maybe beating up the carbides a bit when I crossed a gravel bar I don't think the machine is any worse for wear. I must admit riding the snowmachine is something I rather enjoy beyond its abilities as basic winter transportation. The snowmachine is pretty much a fact of life in the North and with 8 months of winter I can see why. Folks up here were only too happy to replace the sled dog with the "iron dog" once the machines became more reliable than the barn built experiments the first ones were. One only has to experience sled dogs once in their life to see why Alaskans would be eager to part ways with a rowdy crew of ravenous and yelping Huskies. Alaska still has a deeply embedded mushing culture but the popularity of sled dogs is on the wane and is now viewed as quaint and traditional while all the folks with serious travel requirements in the Bush use a "sled". Perhaps the biggest advantage is a snowmachine can sit all summer and not eat a bite.

My only prior experience with snowmachines prior to moving into the Interior was the thrill seeking behavior of the "high markers" that frequented the Turnagin Pass area south of Anchorage and the endless avalanche search and rescues that our fire department ran all winter long looking for riders buried alive at the base of the mountain. I was initially really put off by the daredevil riders on machines with only slightly less horsepower than an Atlas rocket and an attitude to rival that of an outlaw biker gang. It seemed rather typical of other groups of young men I had known riding toys- whether motorcycles, jeeps, ATVs or jet skis. Someone always has to have the loudest, the fastest, the most horsepower, the quickest take-off and no one was ever happy with stock parts. Often bravado got in the way of common sense and someone was injured or killed outright. I left that kind of thing behind in my late teens in pursuit of a quieter life. I dismissed the whole snowmachining thing as a juvenile endeavor and went out of my way to avoid areas the machines frequented after nearly being ran over while snowshoeing in Girdwood one fine spring day.

When I moved to the Interior however, with its seemingly endless boreal forests and fast frozen river corridors, I was introduced to another kind of snowmachine altogether- the trapper sled. Built narrow enough to travel down the decades old forest trapline trails initially ran with dogs and light enough for a lone person to roll over or maneuver about in tight quarters, this is often a Tundra or an old Bravo. It is the complete antithesis of all the high performance sleds on the covers of "SnoWest" and "Snow Rider" magazines. Lightweight, low powered and "blue hair slow" these machines are made for but a single purpose- to carry a rider and their cargo through the snowbound forest or frozen river as efficiently as possible with the least amount of fuss while the rider went about their business of trapping, hunting, or otherwise conducting work in the wilderness. A look under the cowling reveals a power plant that is no more complicated than a standard lawn mower engine and a drive train with a single centrifugal clutch- durability and reliability are paramount over squeezing out another mile per hour on the top end. Once you're away from the cities and in the real Bush, it is imperative that any machinery be serviceable with only a handful of tools and the most basic of spare parts. Ideally it will only require minimal amounts of both- time spent servicing machinery is time not spent engaging in more important aspects of wilderness life. Life in the Bush is hard on people and machines and while tinkering with a high performance sled is an urbanite's hobby, it is extremely irksome to the wilderness dweller. Its in these areas you'll find these old sleds doing service day in and day out, in rugged conditions that would destroy their thoroughbred counterparts before the solstice.

While I generally find wilderness "infernal combustion" something to be avoided completely and gave up ATVing a couple of years ago in complete disgust (article), snowmachining seems a bit easier on the world than the ATV is. In my travels today through the low lying swamp I saw plenty of deep ruts and holes left by "wheelers" who were out "muddin'" just prior to freeze up. No two ways to look at it- the land there had deep and possibly irreparable scars. Comparatively; the snowmachine slides over the snow pack without much trace come spring. After a brief windstorm or good snowfall my presence there today will become invisible to all.

That's not to say the use of the machines is without compromise however. Most of the machines are 2-stroke and while the newer ones are much better than the old ones, they all emit a stinking pollution for an exhaust. Several manufacturers started producing cleaner 4 cycle machines at the insistence of BLM and state governments all over the West. While I've not been there, apparently snowmachining in Yellowstone is a crowded affair and officials felt the need to mitigate potential environmental damage left by honking scads of blue smoke belching machines. I applaud their efforts as the entire industry is forced to produce machines that run cleaner and leave less pollution than ever before. Sadly the bulk of this technology has proven unreliable in the extreme Arctic conditions of Alaska and lots of old trappers look askance at 4 cycle machines as heavy and balky running versions of Russian roulette. The industry will get there in time however slowly.

The other major detriment to the snowmachine is noise. No other way to say it but even the quietest of these sleds produces a loud piercing whine under power. It is a disturbance to wildlife and other wilderness users without a doubt. In areas where large numbers of the high performance machines gather, the sound of 2 cycle engines running 14,000 RPM is quite staggering. Even a basic one cylinder trapper sled will produce a noisy high speed buzz that seems all out of proportion to the rather sedate ground speed. I've always felt mine sounded kind of like a SuperCub airplane on take off while puttering down the trail at a whopping ten miles per hour (very much like a SuperCub in that respect).

So after a morning spent cruising the woods in my size twelve Sorels (no snowshoes required yet!) with a light pack and a trail axe and an afternoon spent travelling down old traplines on a modern snowmachine; which do I prefer? Not really one over the other in that they are both a necessary component of wilderness life here in the frozen boreal world, but I've got to admit I like the tranquility of snow softly squeaking underfoot as the spruce trees absorb the ambient sounds of the forest much more than the raucous hum of a snowmachine.

Author's note- for a wonderful examination of snowmachines in the Bush and a discussion on the compromises the machines require I'll refer the reader to the Conover's excellent book The Snow Walker's Companion which dedicates an entire chapter to the issue.
Posted by hodgeman at 8:51 PM

A cool and interesting point of perspective.

I've long hated jet skis (which have next to zero practical use), and can barely resist a snarl of disgust at the putter of an ATV in the backcountry (although I've put more than one through the paces in habitat work), but I never really thought about snowmachines... which makes sense since I've lived so much of my life below the snow belt.

I can see the pros and cons, but your piece here really shines some light through the prejudices and preconceptions.

I don't have experience with snowmobiles but your article on them makes sense.
I have thought about ATV's and SUV for hunting but decided not to as I enjoy my hunting by walking and I exercise so I can walk and hunt. However a motorised vehicle comes into its owm at the end of a successful hunt for retrieving the animal.

Hi Mike,
Just dropping in on your blog after Wandering Owl gave it a mention, and I must say that he was right to do so. You have a real insight into the outdoors and living where you do brings home to me how tame the area where I live really is. If you don’t mind I’ll tag along for a while, keep up the good work
Murph

Good and thoughtful post. Down here, I have pretty much a hate/hate relationship with ATVs, as the careful users are not very noticeable compared to those who disregard road closures or spend their hunting season buzzing up and down the roads in some sort of mountain Daytona 500. Up where you are I'm sure an ATV is much more important for getting into the country.

The lesser footprint and the great ability to travel in winter makes your trapper sled sound pretty appealing.

I just got a 2009 Bravo 250 to travel throughout places in the summer would be daunting to say the least. I heard it told that this Bravo may be the last true dependable (2 stroke). I can only hope that the heavy 4 strokes traveling deep in the woods can handle the extreme weather produced in Alaska. Time will tell I suppose. There is something to be said about dependability and possibly saving your skin using a dirty but insignificant simple single cylinder 2 stroke.
I would certainly love to have some of the one size fits all lawmakers and those who endorse such laws on behalf of saving the planet could be given a choice between the new 4 stroker and a ole dependable 2 stroker tell them they will be taking a 200+ mile trip into the arctic circle area with chances of temps well below -40. Let's see which one they would choose. I know which one I would go with to insure my safety.
As far as noise goes every time I travel up the haul road I am never disappointed in seeing wildlife and some of them hanging around the easy to travel pipeline trail or the road , guess they got used to the noise I suppose. Animals are so good at adapting I guess..

Bart,
Best of luck with your new Bravo! When I bought my Tundra last year I wanted either a used Tundra or Bravo in decent shape. Couldn't find one anywhere. Apparently folks don't get rid of them, which is generally a good sign.

The Yamaha guys in Fairbanks were out, couldn't see driving to Anchorage, so I ended up with a Tundra single cyl. and like it alot. Especially after having to dig out a buddy's big Polaris 4 stroke last week. That thing feels like it weighs about what a pickup does!