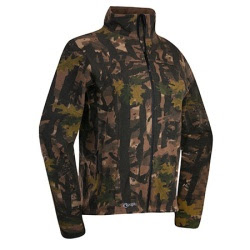 I've got to admit I was skeptical about trying the clothing prior to my last hunt. As I've written in the past, I'm a pretty dedicated wool, canvas, and leather kinda guy when it comes to outdoor clothing- you know stuff that will hold up to a fire or a sharp rock. I also fully recognize that some of these polymer miracle fabrics do offer the user performance enhancing perks but I'm not running a race, I'm on a hunting trip. As my friends at Empire Canvas say- "I measure things in seasons, not kilometers." So fully cognizant of my historical position on such matters as long chain polymers and "wonderflage", my friend and sometimes hunting partner pushed me toward a product made by a company called Sporthill.

My friend is not only a cross country skier and biathlon shooter (which is his likely introduction to the stuff) but an accomplished mountain hunter as well. I fully realize that my traditional garb is not particularly water friendly. At the time we were planning a vessel based hunt in rainy and wet Southeast Alaska coastal mountains. So it was with some trepidation that I dropped the (considerable) coin to purchase a set of the Sporthill "Expedition Camo" pants and jacket to try on a couple of hunts. After some field use I can report the following impressions.

First off is that I'm ambivalent on the camo- but I'm ambivalent about any camo including this one. Although I thought this stuff looked awfully dark, photos of me with a caribou I'd taken shows that it blends in fine. If not to the eye then by the result. I don't expect to wear it to town or the office however and I kinda wish they made it in different earth tone shades. This stuff is seriously comfortable and I'm sure I'll get some more of the skiing clothing to use for winter skiing around town. Heck I might just start skiing in head to toe camo given my natural thriftiness (usually called "cheap" by my spouse). I wouldn't be the first in town to do so.

Second is the lack of ridiculous claims put out by the maker. The only two claims they make is that the fabric is made from some of the most hydrophobic yarn on the market and the weave is tight enough to be windproof to 35 MPH. Its not supposed to be waterproof- only exceptionally fast drying after water exposure. I tested that claim after I crossed the Gulkana river with a hole that exceeded my hip boot height (just love it when that happens) and managed to soak the pants pretty thoroughly. I shook them out and put them back on and in a half hour they were basically dry to the touch from wind and body heat. I also hunted in a stiff breeze that hovered near freezing most of the following day without feeling any ill effects of the wind which was nice. It was refreshing to not be disappointed in ridiculous claims like "waterproof and breathable" which is something of two lies for the price of one in my experience.

Third is the comfort and quiet factor. These things wear like my pajamas. Total freedom of movement and noiseless on brush. This is perhaps my favorite attribute about these things- the most comfortable clothes I currently own. This is where the company shows its competitive skiing roots (they also make Olympic uniforms for various winter activities for those of you going next time). Not that I'm a serious athlete but as an avid recreational XC skier these guys would make some excellent ski gear for most conditions. I can easily see how you could be sweating hard, moving the moisture to the surface, and evaporating it off very quickly. As soon as we get some decent snow base I'm going to check that out.

Now for the bad. This stuff is a niche second line product made by an already niche company and it shows in the cost. I paid something on the order of $250 in Fairbanks for the set and thats a nice chunk off retail if you check their website. Thats a lot of coin for a single task item of clothing unless my advancing age and "natural thriftiness" are showing through again. Although comparable to what hunting clothing from other manufacturers costs, I'm not impressed with their pricing structure either. Maybe it is my natural thriftiness but for those of you with disposable income and hunting in wet and cool weather you might consider Sporthill on your short list. If you're a warm weather hunter in arid climates I'd pass- these things would be too warm.

The biggest negative to me is that this fabric is very heat sensitive. Not only will exposure to a campfire be detrimental but a trip through the clothes dryer will be as well. I guess you don't get something for nothing.
Posted by hodgeman at 7:19 AM