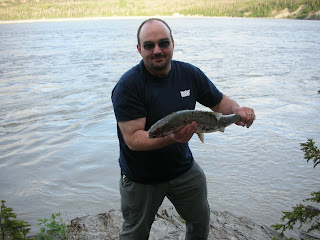 The summer is trundling along right on schedule up here in the North country, including the appearance of the Red Salmon in the Copper River. I've got to confess that fishing with a rod and reel doesn't really wind my crank most days, but dipnetting is a totally different matter. Something about dipnetting is so primal, so active- that it appeals to me greatly. I also love eating reds- so that draw is ever present there too.

So after a long work week keeping one eye on the ball and another on the Miles Lake Sonar charts, I decided on an impromptu trip with my son- his first dipnetting adventure. I decided on a backpack trip to test some new gear as well. We made our way through the town of Chitina and in the late evening we had our gear on and crossed the footbridge at O'Brien Creek. After a short distance I began to explore some of the side trails that led down to the river. These trails vary from the mildly dangerous to the fully technical- requiring descent and ascension gear to navigate to the waterline below- not my idea of a good time in my middle age. Every year I'm amazed at seeing several young men (always men oddly) in full mountaineering harness dangling precipitously off the rocks dipnet in hand over the cold boil of the Copper.

On our third attempt we found a trail that wound protected through the sparse forest and although steep, looked safe enough for an approach. At the bottom I was delighted to find a reverse eddy with a flat shelf to stand on with my son. I briefed him quickly on the protocol of what to do when we landed a fish and exactly what his responsibilities were. I assigned him the beginner task of clipping tail fins while I handled the heavy lifting. We sorted out our gear and settled in for a brief period of fishing.

BUMP! Within a few moments a red salmon had hit the net like a floating anvil and Evan whooped with delight as I pulled the 8 pound red from the water and placed him on the rocks near our processing gear. I showed him how to quickly and humanely kill the fish with a quick rap on the skull with an appropriate rock and then slip a knife into the gills to bleed it and preserve the meat. He then clipped the upper and lower tail fins to mark this fish as "personal use" and marked it on our tally sheet. I was pretty happy that he didn't shy away from the tasks although he declined to wield the knife on our subsequent fish. We were treated to a display as a river otter swam laps in our eddy, checking out the newcomers to his beach with a net full of fish- we hauled in our net until he left for fear of tangling him. After he departed for more private waters we fished for several more hours and then turned in for the night, exhausted with a full bag of fish. 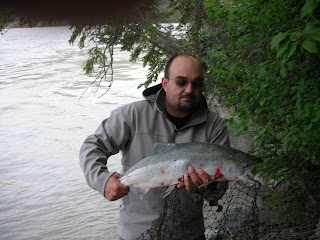 The following morning we began the arduous pack back to the van. I normally haul out fish whole to prevent having to do the messy chore of filleting or gutting in the field. For me, fish are difficult to clean- slippery, hard to hold and generally requiring a lot of delicate cutting- its a task I prefer to do at home.

I was happy that I waited on this occasion.

Arriving home I set up a plastic table in the drive and got out the water hose and started about the filleting process. I was halfway complete and had a nice stack of red fillets on a cookie sheet when trouble began. The knife hung on a bone- one of the junctures of the ribs and spine and while on a smaller species of fish the knife would have easily sliced through on the large rooster the blade was stuck fast. I made the mistake one should never make while filleting- I applied more pressure. At the precise moment the rib severed the razor sharp tip accelerated and the slippery fish moved- placing my right index finger ( I hold the knife left handed) in its severing path. 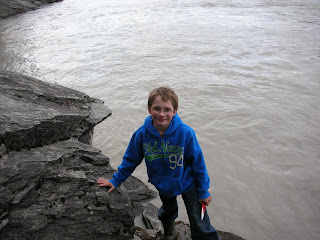 I can't say it hurt immediately, it felt like pressure of something tugging on my fingernail. As I pulled my hand from the fish the fish blood and slime made assessing my injury somewhat difficult. As the tip rotated and the wound bled in earnest I knew I'd seriously goofed up. Rushing inside clutching a bloody and gore covered hand I held it under running water to cleanse the wound while I had Evan call "Dr. Mom" to come look and check out the damage. After she arrived a few minutes later I was in the van and bound for the local clinic with a "mostly" severed finger tip.

The doc met us in the parking lot and after fighting the urge to just pull the barely dangling piece off and send us on our way, we went inside and the prognosis was what I expected- there was no point sewing it back on. It was a small piece and the cut was on the bias, through the nail, missing bone but painfully large. It would be unlikely to reattach and upon further examination a scant millimeter of the dermis was holding it on. He remarked that this injury was something he saw quite a lot every summer as people are fishing constantly and then a brief moment of inattention with the blade. A second with a pair of surgical scissors and I was very awkwardly looking at a piece of my index finger lying in the tray. Finger severed, ego thoroughly bruised the doc asked me, "When was the date of your last tetanus shot?"

Well at least it doesn't seem to be one of the fingers you type with.

Man that hurt just to read that. At least you have some fine meat to show for your effort!

SBW...one of the advantages to the "hunt and peck" method of typing! Slow but resilient!

How do you typically prepare the salmon?

@Dustin- for wild red salmon I keep it simple. Take the filet and put 1 pat of butter on top, couple shakes of lemon pepper (Jamaica Me Crazy is my favorite) and cook skin side down on the grill over LOW heat until you can slide a spatula between the meat and skin.

Wild salmon has a very mild and subtle flavor so any complicated or spicy preparation starts to overpower the food substantially. For farm raised or long frozen salmon the opportunities are endless. Believe it or not- BBQ sauce is not such a bad way to eat it although it sounds like heresy.

I rarely get truly wild salmon. What a treat.
I smoke in a way simlar to you, but I add a little garlic and very light maple syrup before curing. I wash off all brine before curing.
Most of our salmon goes on the grill and I love it with rice and soy. I always cook it till it just turns color and no more. Many ppl make the mistake of overcooking ie drying it out. Will check out Alton Brown. Thx, Dustin