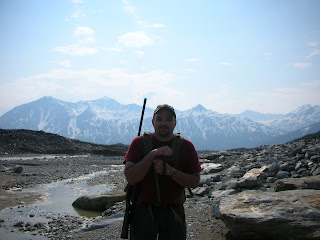 I was reading one of Steve Rinnela's Meateater posts the other day where he was talking about the method he used to harvest a great Coues Deer in Arizona and he introduced me to a new term for an old method of hunting. I've not seen the show (hard to do without cable or satellite) but I'm well acquainted with the method. The term he learned and used was "cold camp" although I've heard "spike camp", "coyote camp" and the technique called "search and destroy", "dash and crash" and a couple others but none seems universally used. I guess its more of a loose philosophy than a well defined technique.

Some honesty here- I work for a living and while I dream of 10 day wilderness trips, Super Cub drops and descending some long unknown drainage in expedition rafts; the overwhelming majority of my hunts are much shorter affairs conducted much closer to home. The tactic I normally use isn't the one most of us think so much about; hiking or moving in a heavy base camp and then journeying from there into more remote areas looking for game. It works and you read about it in most of the journals and hear stories about the epic trips- but among locals it isn't very common. For one, it takes a lot of planning and quite a lot of resources (read: money) and not an inconsiderable amount of time. For the working man, its hard to pull off consistently.

I like to travel light, taking a minimum of equipment and move quickly into an area likely to contain animals and try to maximize my hunting time at the expense of comfort. If I only have a weekend to hunt, I'm not going to waste a day moving in 50, 60 or more pounds of equipment. I'd spend the entire hunt ferrying it in and out. Instead, I'll take enough equipment for a rough overnighter. Maybe a bivy, or poncho and move quickly into position to glass and spend all of the time I've got hunting, glassing and then moving quietly up a drainage looking to score on an animal. If I have to spend a night out it will not be comfortable and the lack of equipment leaves me at the mercy of the elements which could lead to a cancelled hunt should weather deteriorate. As a local hunter, I take great solace in getting weathered out means I just get to go back out the next weekend.

What about night? During our early season in the high Arctic, the hunting occurs in August- long hours of daylight and only brief periods of darkness too dark to hunt. At most we have just three or fours hours of gloomy dark huddled up trying to get some sleep knowing that if the next day turns warm you can sleep in the afternoon's warm sun when the animals are all bedded in the high country not stirring. I've heard from many hunters who hunt hard from breakfast (8:00a) until supper (6:00p) and never see any animals- they've missed the two most important times. The early dawn movements occur between 4:00 and 5:00a that time of year and the evening period often as late as 10:00 or 11:00p- the hunter keeping banker's hours will be ignoring the most important times of the day. For the chilled and sleep deprived hunter, those long hours of warm sun and minimal movement are great times to make a little food and curl up in the sun for a nap.

When practicing this tactic it pays to be in "hunt mode" all the time- minimal talking, minimal fires and movements along protected routes. I believe too many hunters today don't realize the signature they make on the environment and just how far scent or noise carries. I don't believe animals are as scent adverse or even noise adverse as we make them out; but a group of people moving loudly and haphazardly across the environment will affect their movements. The thinking hunter should be minimizing their signature on the environment by maintaining silence and above all else- moving slowly and methodically looking all the while. Thinking like a predator moving in stealth mode could be the difference between scoring and going home with an empty pack.
Posted by hodgeman at 7:43 PM