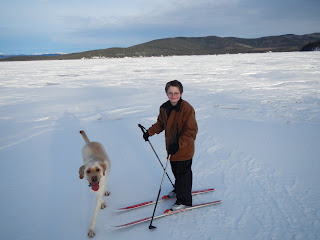 During our recent bout of warmish weather, the family decided that they'd had enough of the indoors. We took the whole gang out for a ski on a large, local lake. The windblown surface of the lake provided an ideal surface for a recreational ski- flat, hard, obstruction less...perfect.

Given that so many of our family live in locales where the local bodies of water don't freeze solid  for months on end, we get many questions about the safety of the ice thickness.

Given that the average temperature has been below 0F for months at this point the ice is pretty thick. A quick check with a local ice fisherman showed it was only about 5 feet thick.

How strong is 5' of lake ice? In tests a few years back- enough to land a loaded 747 on. The skiing family should present no issues... 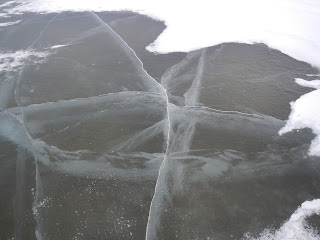 What about those cracks? The savvy winter traveller would look at this photo and be well comfortable with these deep fractures. As the ice thickens and temperature variations cause expansion and contraction these long cracks form in the ice. Bottom line- only substantially thick ice, formed over months will have enough rigidity to form these cracks.

Early season ice would be clear as a lens...and about as fragile. The seasoned winter traveller would avoid it at all cost.
Posted by hodgeman at 9:19 PM