Sonny and the Sharp-tail...and Tacos. 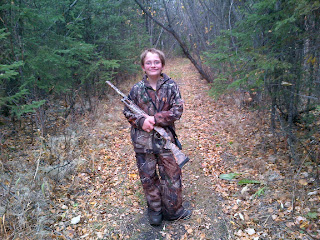 It was a gray Saturday evening. The family is out of state, leaving the dog and I holding down the fort. With the work week over and weekend chores done, we did the only sensible thing a man and his dog can do with left unattended...we went hunting.

I've never been an avid waterfowl hunter; it always seemed to require things that I didn't have access to as a younger man so the duck hunter's itch never really caught hold. In my "middle youth", as SBW would say, I'm trying not to toddle into old age stale and listless so I'm trying to expand my hunting experiences into areas I've previously left unexplored. Case in point...waterfowl. While caribou hunting this year I saw thousands of ducks and given my goal of caribou I didn't take the time to pursue any even though I could have easily. With a caribou safely ensconced in the freezer and the season closed for the rut- I decided to invest in a duck stamp and see what I could do.

A midweek initial foray into the swamp yielded no ducks but I saw lots of them and spooking a bunch tucked into the weeds yielded a hasty shot that connected with nothing. The rest of the evening I watched ducks cruising the far shore well out of my reach. As an ill-equipped duck amateur I was finding this frustrating. So my Saturday evening trip found Sonny and I bound for a series of high country pothole lakes that I hoped would yield some ducks.

We arrived and something that never fails to amaze me had happened. On a small lake that earlier in the month had held hundreds of ducks now was vacant- not even a ripple populated the glassy surface. We hiked a couple miles from lake to lake and each time the story was the same- the ducks had vanished like water in a sink when the tap was turned off. Still, time in the field hiking around with a gun in hand and a young dog crashing the brush around you is never wasted.

The enjoyable hike ended back at the Pathfinder and I wasn't ready to give it up and go home just yet, we still had a half hour of daylight and we were in a good area for grouse and ptarmigan. A few minutes with an Avid Gun Tool and the Benelli was reconfigured for upland game. The modified steel choke for the heavy duck loads was replaced with a more open improved cylinder choke for fast flushing grouse using a smaller lead shot. After remembering my performance on the ptarmigan covey last year and how often I had ran the gun dry I removed the magazine plug as well. I reloaded with high brass 6's and was ready to go. 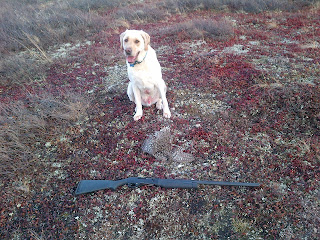 Sonny took the lead and we cruised down the ridge top where the gravel bands made clear, hard trails through the low brush for easy and quiet walking. We had made our way just about a quarter mile and the grouse flushed hard from dog about 30 yards forward and left. The big rooster sounded like Huey helicopter when he took off- wings beating furiously against the sky. Not the most graceful fliers in the avian kingdom, he made a long, slow traverse from my left to my right- silhouetted perfectly against the steel gray sky. The gun flew to my shoulder of it's own accord and cracked once. The grouse's wingbeats stopped abruptly at the report, the sky erupted in feathers as the bird cartwheeled from the sky into a band of waist high brush.

The dog was on him in a flash and emerged just seconds later with the bird held in his jaws. One thing that has surprised me since we've gotten the dog is just how expressive and how tuned to human interaction they are. The look on the dog as he trotted to me with the bird was one of pure ecstasy. Tail high and wagging, gait like a prancing pony, even his eyes showed a joyful light. People who have dogs as family members probably know what I'm talking about and everyone else probably doesn't have a clue. Sonny reluctantly gave up the bird he was so proud of and given the remaining light decided to hunt our way back to the vehicle.

Upon arrival back at home I pondered the best way to render the sharp-tail into a tasty supper. Game birds are pretty versatile and the whole effort of plucking and roasting a grouse just seemed out of place for the type of food I was craving...which was Mexican. A long held pet peeve of mine is that folks think game meat has to be prepared in some exotic way that parallels the often extraordinary effort that goes into the procurement of it. As a result, a lot of hunters are sitting on freezers of meat they seldom eat either due to constraints of time or skill. With a couple of adjustments to the cooking method, game meat can often be used in place of (and frequently superior to) domestic meats. So Roasted Grouse Under Glass or Sharp-tail Tacos? Tacos it was. 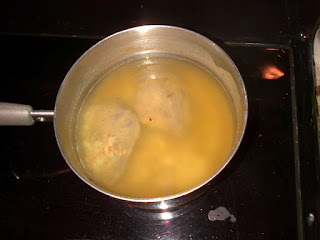 I split the skin open on the grouse and using a sharp knife filleted the breast halves from the carcass. I split the legs and trimmed the meat off the bone and gave the dog a little for his efforts. Despite the size of the bird- that was about the extent of edible meat on the carcass- I've never found sharp-tail to have enough meat on the backs to warrant the effort unless you roast them skin on. I clipped a wing to forward to ADFG for a biological sample and gave the other to the dog to play with while I made dinner. 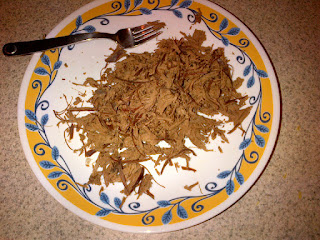 I took the breast halves and boiled them in some water that I seasoned with a little garlic, some minced onion and a bit of chipotle seasoning. I let them simmer for the better part of an hour that way and then let them cool. After they'd cooled enough to handle, I shredded the meat with a fork which served two purposes really- to prepare the meat for the next phase and to look for errant pieces of shot. One thing I've always hated about the shotgun is the tendency to leave wee bits of metal in your food. Surprisingly the prepared meat tasted a little bit like dark pork. Perfect for what I was going to do next. 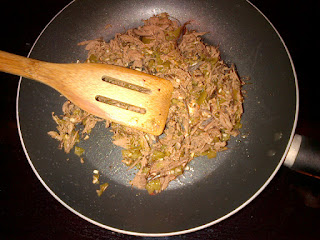 After shredding and ensuring the meat was shot-free, I placed in a skillet over medium heat and added a couple pats of butter, some chili powder, some more onion and some more chipotle seasoning and let it start to saute. I popped open a can of green chilies and drained them- then added the contents to the skillet. By this time the smell in the kitchen was incredible and I thought the dog would drown in his own drool. I heated a couple of tortillas and layered in some meat mixture with lettuce, taco sauce, some shredded cheese and a little bit of sour cream.

The Sharp-tail Taco- not the traditional way to eat a game bird but excellent nonetheless. 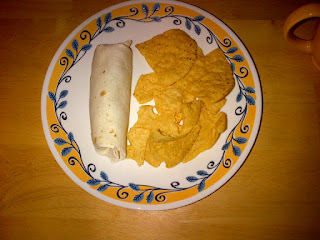 I follow your blog for a long time and must tell you that your posts always prove to be of a high value and quality for readers. Keep it up.