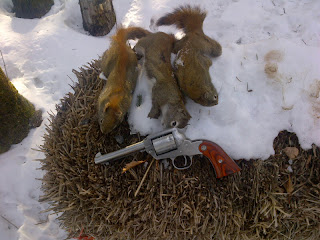 I've got to reveal outright that I've written in print that I don't really care for packing around secondary weapons on big game hunts- mostly in reference to .22s intended for small game hunting during the course of a long hunt. Fully realizing that it sounds like hypocrisy- that's not to say I don't find having a small piece available a bad thing. If I'm on a vehicle supported hunted, where I'm not on foot packing my camp on my back, I'm generally happy to have a selection of weapons at my disposal. One of my favorites is the "Kit Gun".

The "Kit Gun" refers to a small revolver, primarily marketed to outdoorsmen and woods wanderers who find the notion of a handy and lightweight small caliber piece a useful part of their "kit". The first kit guns debuted in the 30s, manufactured by the arms giant Smith and Wesson and were directly marketed toward hunters and fishermen but the appeal went further than that. Smith and Wesson has produced them in a variety of configurations nearly uninterrupted since that time. I've had a couple in .22LR, a marvelous .22 Magnum and currently my collection contains a "hand me down" in .32 S&W Long that is much too old to carry around the boonies.

Despite my long running interest in "Kit Guns" and the off and on appearance of such pieces in my collection, I didn't really have a modern example until recently. That was rectified when in my local firearm dealer's cabinet a Ruger Bearcat appeared. Ruger manufactures the Bearcat as a single action kit gun- minimally dimensioned, and they are available in both blued and stainless steel. I must admit that I prefer the single action revolvers over the more mechanically complex double actions for field use and the Bearcat found itself in my trapping gear as well as an instructional tool for teaching my son to handle a handgun responsibly.

The fixed sights are regulated relatively close to point of aim and the .22LR has all the power needed to take small game for the pot or even deliver a "finisher" to a big game animal already down but not out and for taking animals caught in traps it's pretty much ideal. I've often wondered though if I could manage decent enough shooting with the small pistol to effectively take hares and grouse in a field situation, so I decided to give it a try. A pistol is certainly not anywhere as near as effective as a rifle but at reasonable range I've found the kit gun capable of anchoring small game. Some red squirrels on a great spring day yielded just the opportunity to test out the piece on game.

It worked perfectly out to about 15 yards or so, which is readily accomplished for a lot of edible small game and perhaps a bit further on bigger small game (pun intended) would certainly be doable.

Another writer termed the Bearcat a "mechanical jewel" and it certainly is a nifty piece of diminutive arms making. After some shooting over the winter, the only real complaint I have is the lack of adjustable sights and the fact that (for some unfathomable reason) Ruger decided to make the ejector rod housing out of aluminum rather that stainless steel. It works perfectly satisfactorily, but aesthetically it's grating. Fortunately the firm of Hamilton Bowen produces a stainless version but it's aggravating to spend money correcting manufacturers "cost savings".

For the outdoorsmen concerned with having a small piece for the trail- the Bearcat is perfectly suited.