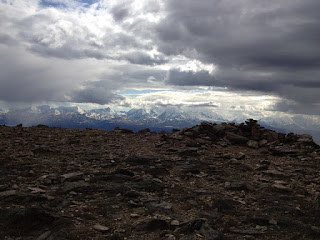 Here we are in the budding Alaskan summer and we've already had two fatalities in my area. The first an extremely unfortunate bear mauling and the second a drowning while fording a swollen creek on an ATV. One may think the Alaskan summer holds nothing more significant than mosquitoes, but you'd be wrong. It's a common occurrence here- summer happens and as people yield their thoughts toward recreation they often let their guard down.

Just recently my family went on a short hike up my favorite fleigberg and we saw firsthand how ill prepared some people venture into the wilds. About 3 miles in and about 2000' up we were passed on the trail by a couple of college age guys. They just looked like college guys in their polo shirts and khaki golf shorts. One of them had sweated through his shirt on the hard climb up. Neither had any water, no packs, no jackets, no bear deterrents....basically just the minimal clothes on their backs. We neared the summit a half hour later and chatted with them briefly while we watched a rain squall move our way. One of them asked me-"When will that rain get here?"

His second question showed me just how out of touch he was with weather in the mountains- you always assume the worst, regardless of season. The two companions took off down the mountain at breakneck speed (potentially literally so) in the hope of making it back to the car before the storm hit. They wouldn't make it. I spent the next few minutes watching some caribou on the valley floor below with my son before the first rain drop fell. In just a moment we had our rain gear on and our equipment packed up and got mostly moved to a small outcropping of rock to seek a little shelter from the storm. 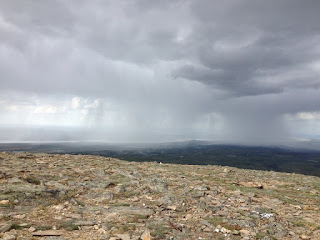 The storm hit rather typically of the early summer squalls we get. The temperature at the front of the squall dropped from a rather nice 70F to about 30F in under a minute and the wind went from gentle breezes to a strong blow of about 40mph as hail began to fall. In five minutes we had went from postcard perfect weather to horizontal rain, lashing wind and hail. We were a little chilled but otherwise fine huddled in our rain gear behind some boulders on the otherwise barren mountaintop but it would have been really bad to be sitting here soaked to the bone and completely exposed to the elements. Under such cool, wet and windy conditions significant hypothermia could set in surprisingly quickly.

And that's how people get hurt. A lapse in judgement that says, "The weather is fine" or "It's just over there...", or "I don't need a jacket...it's summer." Surprisingly, hypothermia cases are more common during our summers than in our winters. Our winters are fearsome and few journey far without coats and gloves and hats, but the summer lulls them into thinking it's not Alaska anymore. My family has made something of a game out of evaluating the folks we meet on trail- "How prepared are they? Do they look like they could take care of themselves should something go very wrong?" At least half fail miserably.

Fortunately for us and doubly so for our ill prepared fellow hikers, the squall abated quickly. Five or ten minutes of wind and hail and cold wind yielded to warmer temps and lower winds as the squall's front passed overhead. Soon it was just raining mildly and after about twenty minutes the sun was back out. I'd be dry before we even reached the valley floor. If this had lasted longer it could have been a significantly dangerous event dressed in golf clothes but a few odds and ends and preparations and it would have been just a nasty inconvenience. Hundreds of Search and Rescue calls are initiated every year in such circumstances- a pleasant day hike turns deadly with unexpected weather. Hypothermia leads to poor decision making which yields even more peril- a fall, a slip or worse.

The number of articles and books that have been written on such topics could fill a library so I won't attempt to recreate any, but in brief. 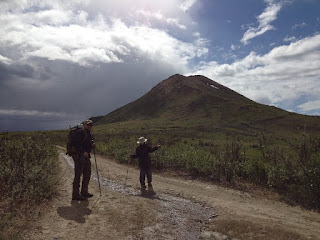 1. Always bring a jacket. Even in summer. Waterproof is mandatory.
2. Always bring water. Always.
3. Always bring some way of starting a fire should you require one. Be proficient at it.
4. Always make a plan and tell someone else about it.
5. Stick to the plan in #4.
6. Always have a first aid kit and the knowledge to apply all of it's contents.

While certainly not an exhaustive list, that would suffice to get the majority of folks requiring SAR services off the list during the summer months.
Posted by hodgeman at 9:28 PM

Nice post, I've been reading a few survival manuals lately, they all contain basically the list you've proffered just told less succinctly. One notable exception added 'take a spare pair of glasses if you wear them' which i thought fitted into the category of 'the elusive obvious'. I'd seen it given as pointer for sunglasses while chartering fishing boats, but never for the mission critical 'being able to read the effing map glasses'

I thought of you yesterday as I was with the nearest thing to an inner-city subsistence hunter I've yet met, and I was reminded of your posts about subsistence hunters. He had a very cool Anschutz in Sub. Hunter cal (22LR) with all the weight in the massively thick barrel, the whole rig weighed less than my air rifle and had taken bunnies out to laser-measured 168yards

You see the same thing wherever it gets wild. I've seen yo-yos hiking the Utah desert with a single bottle of water and no protective clothing. I've seen the folks run 30 miles offshore in small boats with little more than a six pack of beer and a couple of fishing rods... t-shirt, shorts, and a cap (OK, that might have been me a time or two... back when I was young and immortal).

Folks take too much for granted.