My good friend Eric came to me at work a few months ago and asked some questions about setting up a hunting rifle for his son, Isaac. I had helped Eric set up a 30-06 that spring and provided some basic shooting instruction- his 12 year old son was now looking to equip himself for pursuing big game that fall.

Of course, I was enthusiastic about the project as we reviewed several of the available models. Isaac decided on a Ruger American Compact. The compact version of the rifle came with a 12.5" length of pull and an 18" barrel, as well as a small selection of short action calibers perfect for a new shooter. His was chambered in .243 Winchester. I've often heard the .243 equally praised and scoffed as a hunting cartridge for big game hunting. The .243 was an easy adaptation of the .308 Winchester simply necked down to .243/6mm bore and is commonly viewed as a very practical round for both varmints and "small big game" and has a selection of bullets available for either purpose. The round's praise centers around light recoil that encourages good shooting and the cons center around a lack of power for suboptimal hits. Isaac, not having shot anything more substantial than an air rifle previously, wisely opted for the "less recoil=better shooting" concept.

A couple of days after picking up the rifle, Eric and Isaac dropped by the house to equip the rifle with a  scope and head out to the range. The father/ son arrangement had Isaac spending some of his hard earned "wood splitting, yard mowing" money and if he did then Eric would provide the scope. It's very easy as a hunting and shooting enthusiast to get sucked into the heady world of custom rifles, premium ammunition and European optics, but most hunters don't care nearly so much about such things and when your money comes to you at $5 an hour wielding a splitting maul and a push mower- you're doubly concerned with cost. I've received a couple of emails wanting a review of more inexpensive rifles…so to those readers, you're getting your request met.

In regard to cost the Ruger American shown through. Very similar to "budget" rifles from several other makers, it features an injection molded stock, a "trigger in a trigger" to get a decent pull without a lot of expensive hand fitting of the mechanism, and a tubular push feed action that's more forgiving in a mass production environment. My impression upon inspection of the new piece was highly favorable- they'd made every effort to produce an inexpensive rifle…but not a cheap one. I've had enough experience to know the difference and while my personal tastes and budget tend toward more esoteric pieces, there's absolutely nothing wrong with inexpensive and good enough. However, I detest "cheap" and often think they represent a false economy that fails to meet the intended need and new shooters are often handicapped right out of the gate with a cheap rifle or a cheap scope or both. On the Ruger sample the trigger broke clean and the extra tab in the center didn't bother me at all. I ran a couple of patches down the barrel to remove any manufacturing debris and was pretty impressed by the finish of the bore- something Ruger has not always excelled at in days gone by. The finish was a pretty well executed basic matte black. There were certainly no frills to be found, but no glaring flaws either. 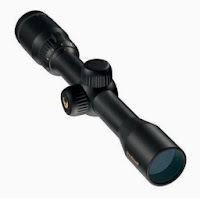 Eric had provided a very common Nikon Prostaff 2-7x32 scope- a sensible power range for the rifle and cartridge and a set of low height Leupold Rifleman aluminum mounts for the Ruger supplied and installed Weaver type bases. The scope was clear and bright and certainly cost effective. Mounting and bore sighting the piece proved straight forward and simple and the final effect was a very well balanced and light hunting rifle that fit Isaac well. A few minutes safety instruction and we were off to the range.

Isaac has also picked up a couple of boxes of Federal "Blue Box" ammunition in the 100gr weight. Nothing fancy here but a proven performer in a lot of rifles I've had over the years for accuracy and appropriate bullet construction for big game hunting. Eric took the rifle and proceeded to fire three rounds. I was watching through the binoculars and saw a nice, tight cluster appear just a few inches from the bullseye. A couple of clicks on the turrets and the second group was centered nicely there and a mere 1.25" in diameter. Isaac took the rifle, assumed the prone position and fired a nice 2" group on the bull- a great effort for the first experience with a high powered rifle.

Several more similar groups out to 150 yards and we were all satisfied with the results. I'm pretty sure with a little better rest and possibly some different ammunition we would have no issue getting reliable sub MOA groupings with the rifle.

As far as cost goes it broke down to something like this:

I've got to admit that I've spent considerably more on a rifle that didn't shoot nearly this good, much less one with a scope and other required accessories. I certainly believe that we've entered a new era of firearms, optics and ammunition manufacturing- CNC machining and manufacturing has made tolerances not achievable in years gone by not only possible…but affordable. As a result we often now find very inexpensive rifles that shoot as a good (or better) as the efforts of highly skilled gunsmiths only a generation or so ago.

After a couple more practice sessions with the rifle, Isaac got a "go" for big game hunting with the piece.

More to come in "First Blood….Part 2"

A lot of DIY fix a lot of stuff with Craftsman tools. They are not shiny or refined, but they get the job done. An 870 is another fine example. Sometimes I feel sports ppl get to caught up in what they are carrying instead of mastering the quarry.
Same goes for fishing. A $100 perch jigging combo is obscene.

I hear you Dustin. As a self admitted "kit tart (recovering)"….it's easy to get wrapped around the axle about guns and stuff while losing sight of the goal. Stay tuned for some articles about the Savage 111 in 7-08…another youth oriented rifle that came in at $500….with a Nikon scope mounted.

I've gotten several requests for articles and information about "budget guns" of late and the two I'm currently working with are extremely impressive for the cost.

.... post script.... I've now set up three of these rifles for folks- all shoot more than acceptably for hunting. When I wanted a predator calling rifle- I picked up an American in .223. It shoots as good as the others. A full review is forthcoming.

hodgeman have you had any dealings with the compact in 7-08?

Jimmy, I've put together the following-

So far, they all shot reasonably well. My .223 shoots 1 MOA with Hornady 55gr ammunition. Between 1 and 1.5 MOA on everything else with regular ammunition. I picked my son up one in 7-08 in left hand. I absolutely love the 7-08 cartridge- one of the best behaved cartridges out there. My son has now KO'd three caribou with his youth model Savage and is ready for a full size- he insisted on another 7-08 and the American was an easy choice.

I would certainly suggest you put these on your short list of guns to consider. I'm sure Ruger lets a bad one out the door occasionally, but so far I haven't seen or heard of one.