26 Nosler, Something New…or Not So Much 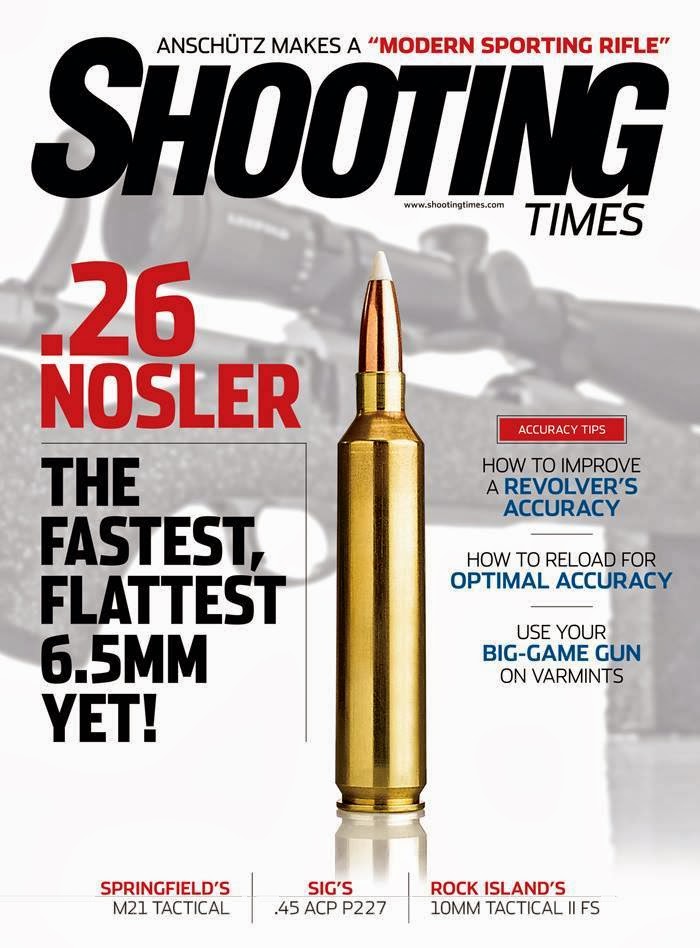 As many of you are aware, a new cartridge was introduced by the Nosler company this year- the 26 Nosler and the first cartridge to bear the company name on a headstamp. And while I don't have one (and am unlikely to acquire one) a couple of readers asked my thoughts since I'm an unapologetic fan of Nosler bullets and rifles.

What it is-
A very large cased 6.5mm cartridge intended for open country shooting. It's 129 Long Range Accubond bullet is rated at 3400 fps at the muzzle and the company claims it shoots flat to 415 yards.

What it isn't-
Magic or, particularly, new.

While few cartridges shoot as flat as this- there are many when zeroed at 300 yards will shoot within a few inches of what this one does and a couple even shoot flatter. I'm not against a company throwing a better mousetrap out there and I do think this would make an excellent sheep, deer and antelope cartridge when paired up with an accurate rifle of moderate weight. Nosler's M48 fits the bill on that one. But it's not that much different from a lot of existing cartridges in it's class. Immediately the .264 Winchester Magnum and the 7mm Remington Magnum come to mind and well as some of the excellent Lazzeroni and Weatherby magnums. When one crosses the pond the 6.5 has some great numbers like the 6.5x68.

I've got a couple of concerns just reading the press release:
1. Barrel life- it's gotta be short. That much overbore is going to be darn hard on barrels and while I'm a hunter first and 700-800 rounds might present a lifetime of hunting… there is no denying that a lot of rounds downrange will take it's toll. That's something of a trifling detail since barrels are better than ever but the next point is more concerning to me.

2. Bullet performance- the LR Accubond is somewhat softer than the company's excellent Accubond that I've used to great effect the last several years. It has to be to expand reliably at long range (it's raison d'être). at the muzzle though I'm very concerned that soft bullet when coupled with high speed impact will result in bullet fragmentation. I'm also concerned that up close the meat damage will be fearsome much like my partners 300 RUM shooting the 150gr Scirocco.

3. That 6.5 bore- there is no denying that in the US the 6.5 (.264) bore is about as popular as the clap. The wonderful 6.5 Swede has next to no following here. The .264 Win Mag is for all intents and purposes deader than fried chicken expect for it's cult following and the equally good .260 Remington is in much the same boat. The 6.5 Remington Magnum is part of cartridge history. The 6.5 Creedmore and the 6.5x284 have some following among the F Class crowd but outside of the enthusiast's circle they have little following. While the 26 Nosler is likely a technically fine cartridge, Americans have shown little interest in the bore size going back a century.

I'll admit I do have something of an interest in the cartridge as a specialist's weapon for mountain hunting but I'm also more pragmatic and have little interest in owning a bunch of specialized weapons for different hunting scenarios and absolutely no interest in long range shooting at all. In fact, one can browse what I've written and see my interest largely lies in more general purpose pieces and a decided hatred of long range shooting.

While the gun press has broke blood vessels yelling the new cartridge's praise…the word on many of the shooting and hunting forums and among the gun buying public is greeting this offering with either a decided yawn or outright derision. It will be interesting to see what becomes of this one in the next few years.
Posted by hodgeman at 11:45 PM

Funny (I guess), I had a lot of the same thoughts talking to the Nosler rep at SHOT about this cartridge. It does put down some impressive numbers, but shooting something with that much powder, that fast, has to be hell on a barrel. And, like you mentioned, something that fast in a relatively soft bullet would be like a grenade going off in a critter at closer range.

I asked about the possibility of seeing it loaded with something like the E Tip bullet. The engineer said they'd discussed it, but they're still at the one-step-at-a-time level right now.

Success will come from marketing and timing, as it has for every other popular cartridge. One doesn't have to think back very far to remember the hoopla around short-fats (WSM and variations thereof) and the reality that most of them have already disappeared from conversation, not to mention disappeared from store shelves (if they ever appeared at all).

I'm thinking they released this with the 129 LRAB for a couple of reasons…the scorching hot muzzle velocity for starters.

The other is the 1:8" twist barrel…I gotta wonder if it will stabilize the longer bullets like the E-Tip or the 140gr Accubond. Probably will but it's got to be getting close to the edge with that much powder behind it.

Addendum…the first specs on the M48 called for a 1:9" and that might be problematic with heavier bullets.

Current specs call for a 1:8" and that should stabilize the long pills.