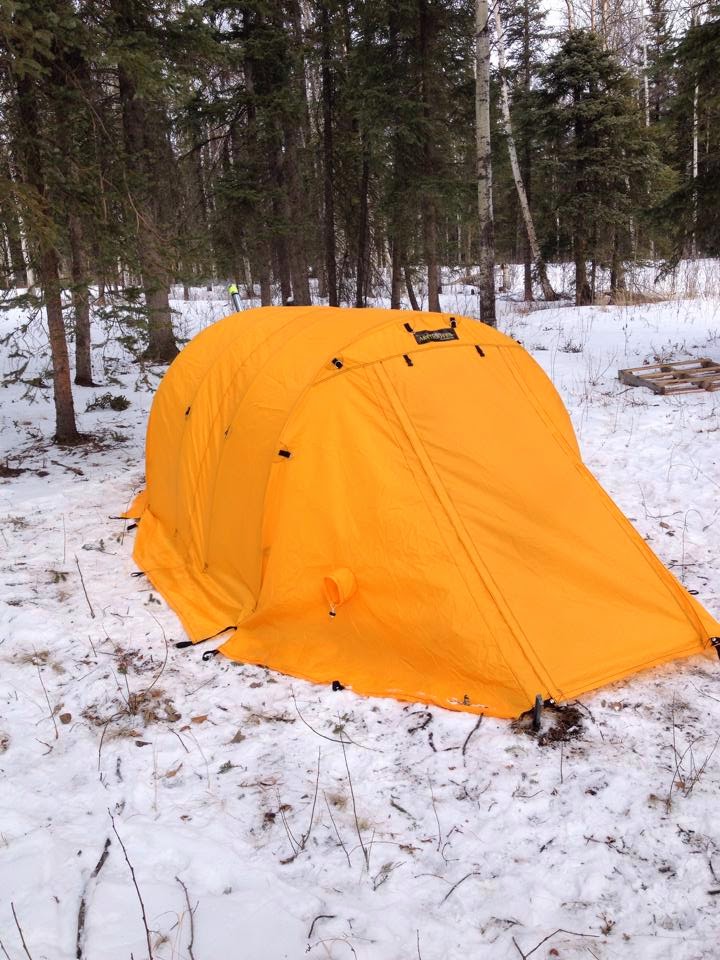 I'll readily admit that I've been a fan of the Arctic Oven line of tents since I saw my first one at a sports show in Anchorage many years ago. I'm not alone in my admiration of them, in Alaska and much of the Arctic north they are THE cold weather tent of choice and are a fixture on the Iditarod trail, hunting camps and mining operations almost uniformly. The only reason I never took the plunge is the cost for such a tent is pretty steep (more on that later) and the weight and bulk was always too much for the type of adventuring I do. A regular Arctic Oven weighs in at something like 70+ pounds with a stove and takes a very large duffel to haul it in. This is not a critical statement- they are not built for the mobile sportsman but are intended to replace and outperform the centuries old canvas wall tent which are a fixture of much of the West. In fact, when compared to a traditional wall tent the Arctic Oven is lighter and far easier to pitch but compared to a mountaineering tent...it's huge, and heavy. Being that my style of hunting precludes that much bulk and weight I've been an admirer, but one from afar.

All that changed a couple of years ago when they started to produce a large tunnel tent, called the Pipeline. I looked pretty hard at them but they lacked the feature I was interested in most in the rest of their line- the ability to add a stove. The world has plenty of great base camp tents but adding a stove takes camping to a whole new level. All that changed again when the Arctic Oven folks got so many requests to add stove jacks to the Pipeline they finally offered it as a standard feature. Age also had something to do with it too. Now I'm camping with a family rather than solo most of the time and while many guy hunting companions are content to shiver away, soaked to the bone in a 3 pound ethereal wonder shelter while the wind threatens to fold the whole works around your head.... most spouses and kids are not. I tried a "faux camper" built around a cargo trailer but found the whole notion just...too much as well as impractical for any hunt that leaves the roadside. 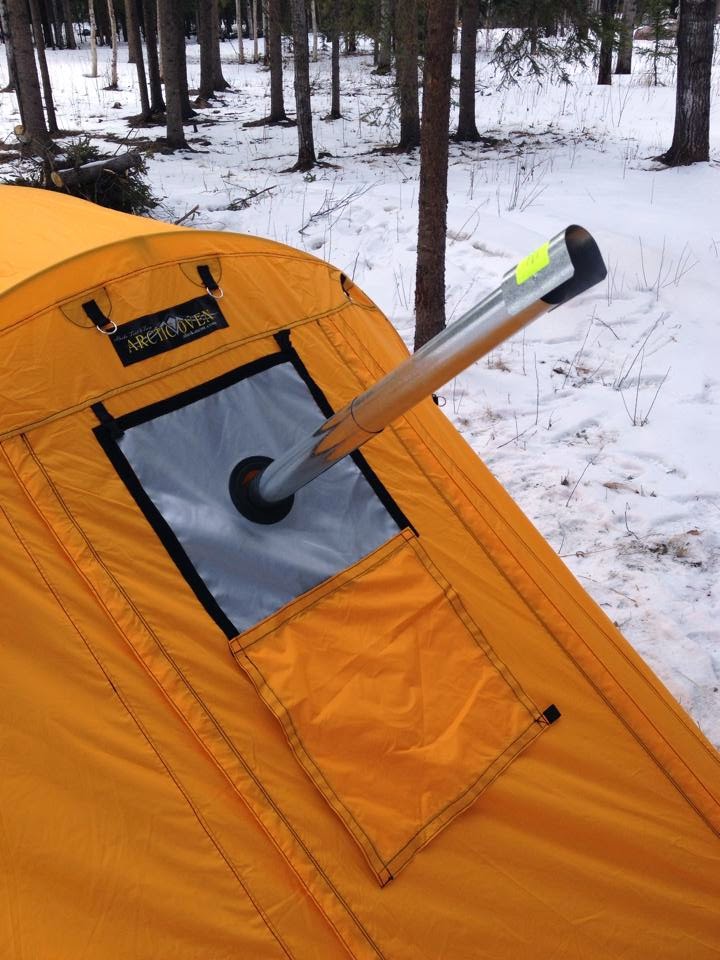 The Pipeline fixes a lot of that... at 19 pounds plus 6 pounds for the stove and accessories it is certainly not a tent that you would consider backpacking with but it is certainly in line with other base camping tents that you might haul on an ATV, carry on a canoe trek or raft trip or (what I'm going to do) roll the works into the back of a Super Cub airplane and get dropped in the back country. The stove adds the ability to warm yourself and dry wet gear, the lack of which is frequently the source of most Alaskan hunting misery. I can do ok hunting through the rain, but several days of wearing the same soaked gear and boots ceases to be any fun. Since August and September are the rainiest months of the year as well as packing early season snows- a typical caribou or moose hunt often turns into a marathon sufferfest.

Some features of the tent itself- the tunnel tent design withstands wind and has been proven in the mountaineering community for years. That same tunnel design cuts down on the number of poles and structural elements and the weight of those same elements when based on the amount of volume the tent has. One drawback is that the tent is not freestanding- it must be staked down as it requires some degree of tension on the pegs to remain standing. It is a 6'x12' tent with 18"vestibules at both ends. If we were talking "mountaineering standards" this tent would sleep 6 people...but whoever wrote those standards must enjoy spooning with their companions and do their camping without any other gear at all. If you weren't using the stove you could sleep four with gear and not be overly tight using the vestibules for gear storage. Using the stove three would be doable and for a duo it would be extremely comfortable. For a solo hunter as a long term base camp this would make a luxury palace utilizing a low cot giving spacious volume. 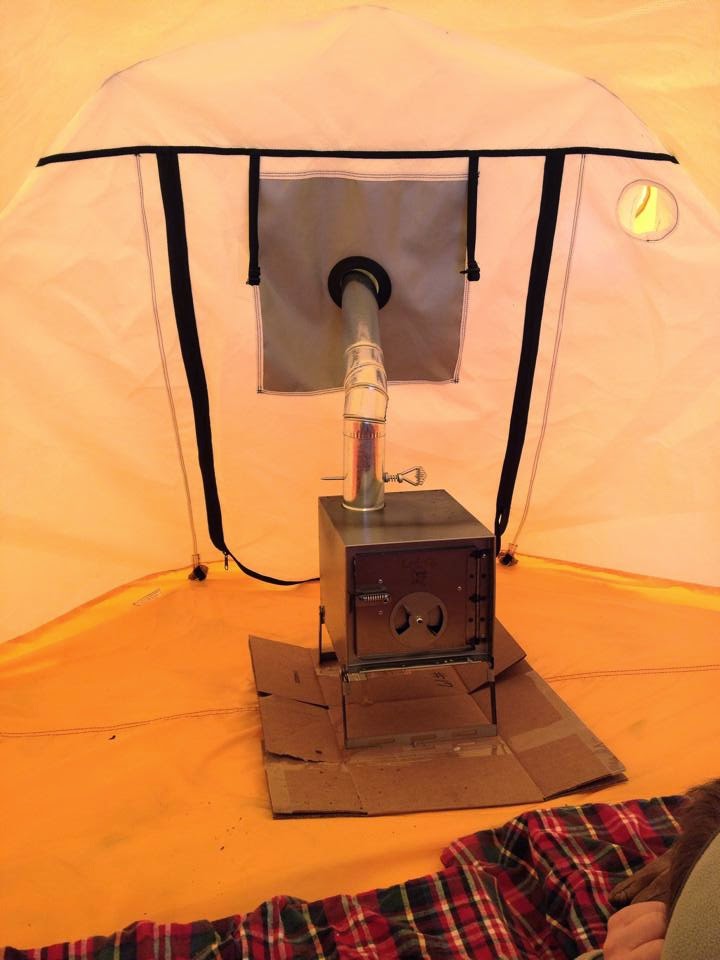 The stove is a simple, non folding sheet metal type utilizing a 3" pipe. The stove is not airtight (none of these really are) but has a circular air control in the door and a damper in the first piece of pipe off the stove. You would want to be cautious damping the fire too much but some degree of control is possible with this method. The firebox is small and the maker suggests adding a layer of sand or gravel to the bottom before firing to protect the metal from direct contact with burning material- sand and gravel are nearly universally available so it's not really a big deal. A steel grate to is available if you want to use charcoal only but I see no reason to use a grate since charcoal will burn fine on gravel.

Speaking of fuel- I powered my stove with a couple of handfuls of dry twigs I snapped form a brush pile. In this small stove you're limited to sticks and twigs about 6-8" long and about 1" in diameter. I considered briefly a propane powered stove but thought differently once I considered using charcoal if wood fuel was not available. The amount of fuel required to heat the tent is minuscule even in cold temperatures. A 30F, a handful of dry twigs brought the temperature to 70F within 5 minutes and in 10 minutes it was 90F at the apex of the roof. I've got several friends who heated their tent with a propane lantern down to 15F without issues. The tent does have high and low vents for fresh air but I'll admit I'm leery of using a propane lantern as a heat source. 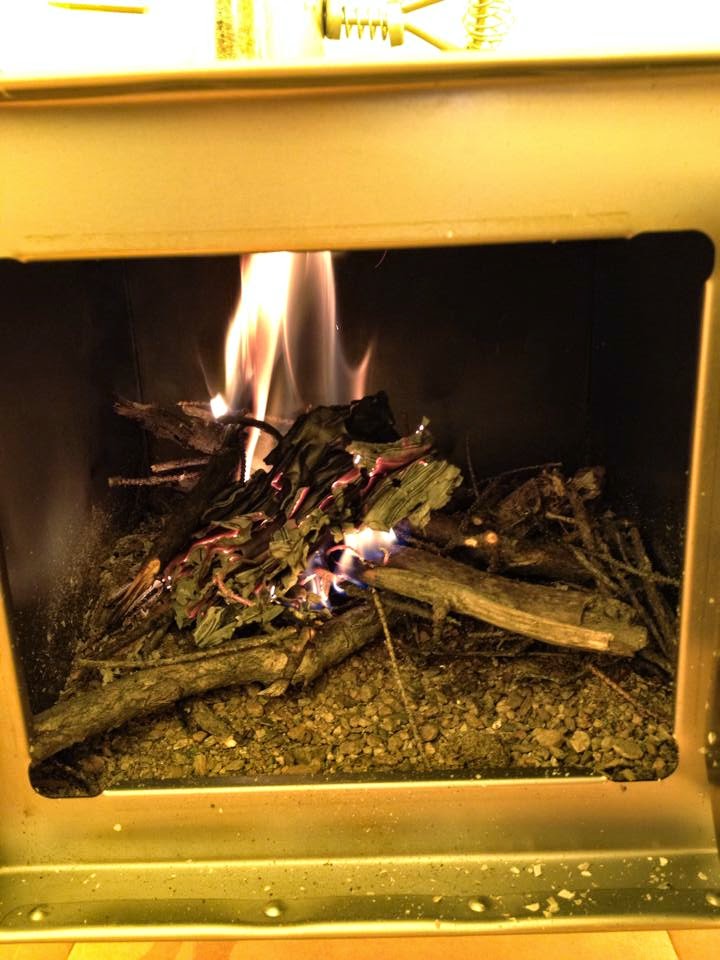 The workmanship on the tent is first rate- essentially handmade to order in Fairbanks, Alaska and perfected for use in this environment over years. After talking with the staff and picking up my tent I must admit it is refreshing to purchase an item from people who not only actually make a product but use it themselves. This stands out in stark  contrast to something from a mail order house or retail outlet that was produced a half a world away through a litany of sub contractors and makers- many who may have little ideal the cost of equipment failure in the Arctic winter or even less about the concept of camping and hunting in general.

More to come, but I've got to admit I'm looking forward to using this a great deal in the years to come on my adventures. The ability to dry out gear and sleep warm is of tremendous value and my "middle youth" bones think its a great idea.
Posted by hodgeman at 8:06 PM

Thanks for the review on the tent. I'm looking at a cold weather tent, and thoiugh I find the prices of Arctic Ovens a little scary, the pipeline has piqued my curiousity.

I have a question about your comments regarding the stove. Can't you use a different stove, or did your tent come with the stove as part of a package? I'm sure you're right in that it takes very little fuel to heat the tent, but my issue is that burning small quantities of fine fuels means you won't be able to keep a fire going for long, and you'll spend your time gathering fuel and tending the fire.

Thanks for writing Lee, you're correct the burn times are pretty short- an hour or so is about it. You can use any stove you'd like of course, although a bigger cylinder stove is going to be overpowering in all but the coldest conditions. Nu-Way makes a propane stove, a friend has one and it's pretty simple to use and on low will keep these tents toasty to about zero.

I find that I build a fire in the morning to warm up and then again at night for a longer session to eat supper and dry out gear. I can get warm and get in the bag and stay warm till morning. In really cold winter conditions, I'll usually wake up in the middle of the night and load it up and go back to sleep.

You have to be careful or overheating the tent would be pretty easy to do.

How and where do you cook ? In the vestibule? Can you use the stove as a cooking pan?

In the winter months I cook in the vestibule although the stove can be used to heat water by just sitting a kettle on it.

In warmer weather I cook well away from the tent are due to bears being prevalent in my area.