The Worst...and Best Shot of my Hunting Career 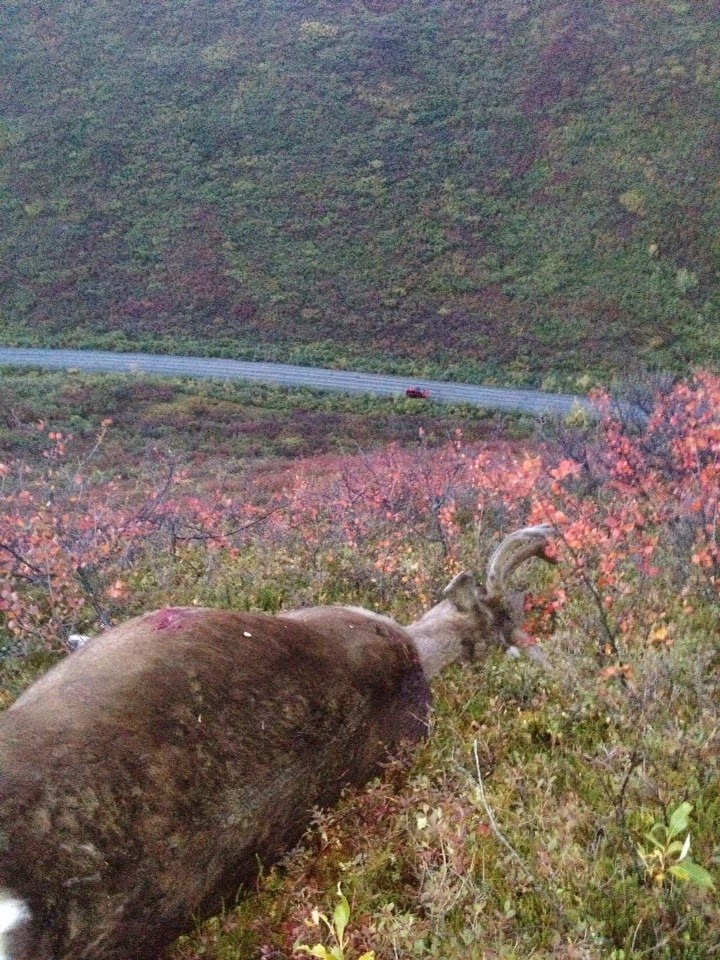 The fall hunting season had been an aggravation. I had sustained a substantial back injury right out of the gate by hauling an inflatable raft over a mountain goat path masquerading itself as a portage around a waterfall. Neither my partner or I had expected it to be nearly so rough but we got into a position of having half of our camp on one side and half on the other as darkness began to fall and at that time I made a terrible decision. I strapped the entire rolled up raft onto my pack and took off down the mountain. Somewhere halfway down I stepped on a piece of inclined rock and something in my lower back just let go. The pain was immense but I managed to get the raft the rest of the way to water. The rest of the trip was horrible. I even managed to yell at a bear sniffing around the camp that night in such a cross voice the bear scampered off. I was pretty happy about that, I doubt I could have even gotten up if I'd wanted.

A trip to the doctor confirmed what I feared- an aggravation of an old injury. He would do his best to keep me out of surgery but I had to do my part. Which essentially was- don't carry anything and take it easy. I protested to the doc (who was also a hunter) that I had a long anticipated goat hunt planned in just two weeks. He looked at me sternly and just replied, "No, you don't." So the fall just drug on... I went on some hunts, all taking it easy. In the car, close to the road, on the wheeler. Several attempts to camp just led to frustration and a long sleepless night of not getting a wink of sleep. Unable to get any rest, I pulled out of one trip early and cancelled another all together. I will say, that I have some very good friends and hunting partners. Gary was very understanding when I had to leave early from camp and he was excellent about helping me not hurt myself worse than I already was. Another friend of mine who I was mentoring volunteered to ride along on a weekend hunt and serve as chief packer in exchange for showing him how to field dress an animal should we be so fortunate to get one.

The hunt commenced pretty normally. We rolled through several of my favorite areas and seeing nothing, travelled further west looking for the herds. We came to a feature called "Crazy Notch" and on the western side of the most unlikely mountain pass you'll see we found them. We climbed a small pressure ridge and spotted several dozen caribou over the next 7 or 8 hours but none came within rifle range except for one cow. She was about 250 yards away and I believed she'd come closer, instead she vanished. I must admit I was feeling the pressure at this point. We were 6 weeks into the season, the bottom of the freezer was visible and I had a new hunter along for the ride. Sometimes when you feel that internal pressure- you don't always make good decisions.

As we made our way back through the steep sided pass just a few minutes before dark, my partner spotted a couple of caribou on the side near the top. They were traveling quickly and would soon be over the summit. I made a snap decision and made perhaps the worst shot of my hunting career. I snapped into sitting position and looped into the sling. I peered through the scope in the dim light and settled the crosshairs just as the animals stopped and peered back down the steep slope at us. Ka BOOM! I have noticed the sound our Germanic brethren call the kugelschlag several times over my life- that is the sound of a bullet striking the ribs of a slab sided animal. It sounds like a guy whacking a side of beef with a mallet or a bat, or in odd instances like a cardboard box being dropping on cement. At close range the sound of impact isn't very distinct against the report of the rifle but at about 150 yards it will stand out as a distinctly separate noise.

Except in this case that sound of bullet striking home occurred much later than I thought it should. I had made a terrible shot in the fact I had been so focused that I didn't realize that this animal was over 350 yards away. Much further than I thought- the worst shot of my career.

I worked the bolt quickly found the cow again in the scope. She was regaining her footing and started to run to the west on a course that would take her over the summit in just a couple of seconds. I applied generous lead- with the crosshairs standing out in front of the animal- and caressed the trigger again. Ka BOOM! The rifle thundered in the tight canyon we were in and I heard the sound of the bullet striking home again, this time accompanied by a sharp crack as the bullet found bone. The cow tumbled from inertia end over end through the bushes and for a second I thought she might fall all the way to the bottom before coming to rest on a small ledge.

My inexperienced partner looked at me in disbelief and exclaimed, "What a shot! That was unbelievable!". I was shaking badly, knowing that the second hit was a lot of luck and without it we'd be headed to the top to conduct a long and, likely, fruitless tracking job in the dark. We dropped our rifles and stripped packs down to just essentials given the steep nature of the terrain. I dropped my .357 Magnum into my pocket as afterthought thinking it would be a comfort packing the meat back down to the road in the dark and not wanting to haul a rifle all the way up the steep face. We made our way up quickly and had to detour around several vertical sections. My partner was a big guy and much heavier laden than I and I wanted to find the animal while we still had a little trace of light in the sky so I sprinted ahead. When I found the ledge, the caribou did the most unexpected thing- which was tried to stand.  She was unable due to a broken shoulder and spine. I grew sick to my stomach and drew the small revolver and fired twice. I'm certainly not a novice with a pistol but due to adrenaline, fatigue and lack of breath, I just flat missed despite being only a few yards away.

By this time I was growing more disturbed. I take every effort to prevent this kind of thing and I was only so much happier that my partner was still down the mountain. I briefly considered that I just had 3 rounds left in the cylinder so I charged the last few feet and fired a single action shot at near point blank range and caribou collapsed. Finally. Down for good. I shouted back to my partner who had no idea what had just transpired that all was well and that I had finished off the caribou with the pistol. I walked into the low bushes and though about retching for a moment and stripped off my jacket to let the cool mountain breeze dry me off as my partner made his way up and the sun's rays in the West faded to dark. I was relieved. Meat at last.

My partner was in shock when he finally saw the animal on the ground- much larger than he expected. He'd never been this close to any large, wild animal before and its size impressed him. I had regained my composure somewhat and was able to resume my role as mentor as we took some photographs. The distance would later turn out to be 356 yards and a 58 degree up angle. I've passed up much better shots than this on numerous occasions and I can't exactly pinpoint why I took it this time but thankful I was. My first shot had hit a little far back and had destroyed the liver. It was a fatal hit but not immediately so. The second had hit the shoulder blade and due to the extreme uphill angle, smashed the spine. The caribou was indeed only moments from succumbing to the wounds and unable to escape when I topped out and perhaps the time wasn't as long as it seemed right then. I was pretty happy to have the handgun to apply a quick coup de' grace and finish what I started.

Later that night after the work was done and we had the caribou off the mountain, after we had made camp, eaten a quick meal and turned in; my aching back stirred me from slumber. I painfully crawled from the tent into the cold mountain air. There was a layer of ice on the fly and built a small fire. Looking skyward and shivering, the aurora borealis blazed overhead. We had meat on the pole, a fire in the camp and an Aurora in the sky- all was right with the world.
Posted by hodgeman at 3:16 PM