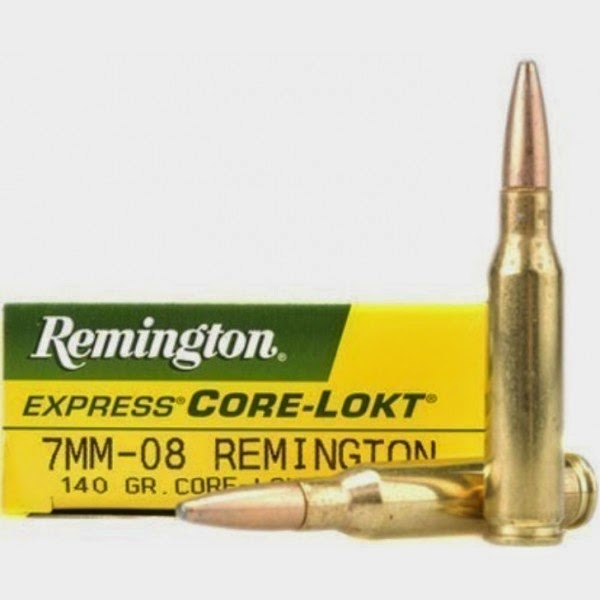 I've been messing around with the 7-08 Remington now for a couple of years and have gotten enough field experience to go ahead and offer up this piece. Don't mistake this for something exhaustive, it's not; but it does offer an introductory look at what I consider one of the best balanced cartridges out there in my (not so humble) opinion.

Sometime back in 1958 or so, some enterprising fellow necked down the then new .308 Winchester and stuck a 7mm (.284") bullet in it. The idea stuck and it survived as a frequently seen wildcat in one form or another as the 7/308 until Remington decided to offer it legitimacy as the 7-08 Remington in 1980. Ballistically speaking, it is simply the very old and very good 7x57 Mauser in modern guise and the cartridges don't have enough difference in performance to even talk about. Come to think about it, it's not really much different than the .280 Remington in most factory loads and not far off the .270 Winchester either. If there's a better performing quartet of cartridges under .30 caliber, I just don't know what it is.

The 7-08 can fit into a true short action and can be built into a rifle of surprisingly moderate weight and generally does well with barrels as short as 20". The cartridge also generates a surprisingly mild recoil and is commonly touted as an idealized youth and ladies rifle and found in small carbines just like the one I outfitted my son with. I'm very good with all that, but I believe to think that it's just a good ladies and kids gun does the cartridge something of an injustice.

What the 7-08 has going for it is extremely good manners. The cartridge doesn't beat you to death with recoil. The muzzle blast isn't fearsome. The cartridge does well in short barrels and a standard 22 or 24" tube will yield great results. The cartridge also has a tendency for stellar accuracy. Stoked with the proper projectile, it might just be the ideal deer cartridge for all of N. America. Built into a true lightweight rifle, it might just be the idealized sheep gun. If you build a rifle with some heft to it, it becomes a bench gun with enviable performance.

It's really pretty sad, but I came late to the 7-08 party. If I'd have found the 7-08 back in the day, I'd likely have never owned a .308...or even an '06. I know for sure I'd have never bought a .270 if I'd arrived at the 7-08 first. That's pretty high praise indeed. I don't think it's a giant killer, certainly outclassed for moose and grizzly, but for the guy who hunts deer, caribou, hogs and black bears it's likely the only rifle you'd ever need. I'm not an elk hunter but I would go bigger, although I know a couple folks who took their elk with the 7-08 without undue drama.

If there's one drawback to the 7-08, it's that companies keep loading it with bullets that are far too tough for the mild speeds the 7-08 generates. For instance, the Federal 140g Trophy Bonded load leaves the muzzle at 2800 and at 200 yds is going along at 2300 feet per second. By the 300 yard mark it's down to 2100. That's an awfully tough bullet to expand well at 2100. I'm probably in the minority here, but at these old fashioned speeds there's simply nothing wrong with old fashioned bullets. The ancient Nosler Parttion, the soft Ballistic Tip (Hunting), the Speer Hot-Cor and Remington Core Lokt have all performed well at these speeds for decades. No need to re-invent the wheel here.

Almost everyone makes a a good rifle these days in the 7-08, including the typical carbine length rifles with shortened stocks for smaller statured folks but it doesn't stop there. Remington chambers their wonderful Mountain Rifle in 7-08 and Kimber chambers it in their 84M action in several models. For the Eastern deer junkie, their Adirondack would be a superb backcountry gun. Sako, Browning, Winchester...heck, almost everyone makes a 7-08 to almost any taste. A friend even has one in his Remington 700 Tactical...a heavy barreled tack driver that kills deer with regularity on his farm.

With mild recoil, a moderate report and good bullet performance over normal game ranges with standard bullets...there's just a lot to like when you go shooting with Mr. Manners, the 7-08 Remington.

By the way, should you get the opportunity, the Nosler ETip seems to perform pretty well in the 7-08. You don't need lead-free ammo up there, but it's a good, deep penetrating bullet that (in my experience to date) provides excellent terminal performance. Nothing wrong with the bullets you've described (especially the Nosler Partition), but just in case you think you might want to try something different...

Phillip- when you look at all the great standard cartridges we have, it's like an embarrassment of riches. I just happened on the 7-08 in Evan's rifle and would have preferred something else, until I shot it and we did some hunting. Now I think it's the cream of the crop in it's class.