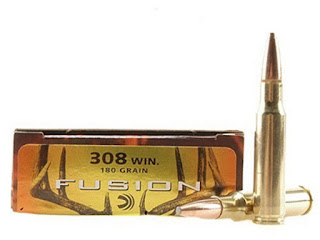 I get a pretty routine amount of correspondence regarding cartridge selection for Alaska hunting and a typical query goes something like this..."I've got a .308 but I want to go moose hunting..." or some variation on that theme. Typically, someone will have a rifle they've used elsewhere but after reading a bunch of Internet chit chat they have become convinced that their deer gun is suddenly inadequate for hunting in the North. They might come to that conclusion through a variety of reasons- moose, bears, long range, or some combination of the above but all come to the conclusion that the .308...is somehow...inadequate.

On the other hand, I'm pretty plugged into the Alaska hunting community and am friends with a large number of very successful hunters. I was treated to a photo last week of a couple of friends of mine- a married couple- who explore much of Alaska and hunt extensively. The photo was from their spring bear hunt on Kodiak Island chasing the island's world famous brown bears. I'll not spoil the story should they ever decide to tell it and, besides, this story is about the .308 Winchester. Suffice to say the archetypical animal that inspires thousands to purchase true elephant guns in their pursuit fell to a single broadside shot from a .308 Winchester. And this couple are not just some lucky fools who happened to make it work once. They hunt bears, goats, sheep, moose, caribou and everything else on a near constant basis. Hubby is something of a rifle crank like I am but the wife is a "dyed in the wool" fan of the .308 in her bobbed Kimber Montana. It's the rifle she shoots the most, shoots the best and has bagged about one or five of everything there is to shoot here. Including now, a nine and one-half foot Kodiak bear...on the heels a 62" moose a couple years ago and a mountain goat last year.

Putting the 180 grain bullet at a plodding 2600 feet per second where it goes is much more important that a heavier bullet or a faster bullet.  The fact that the world's most popular hunting cartridge is now the .308 isn't likely an accident either although worldwide acceptance isn't a wholly deciding factor alone- look at the AK47...easily the most common rifle on the planet with little to recommend it.

I've had a very long association with the .308 and have taken a sizable number of animals with it, including my nicest caribou- a true old giant of a beast as far as caribou go. I wandered away from the .308 some time back, partially out of sheer boredom but I could easily go back to it as an all around rifle. I would do so with total confidence too. I've had .308s from Remington, Kimber, Winchester and of course, my Steyr. There's nothing I wouldn't hunt in Alaska with any of them. I handled a wonderful Sako Carbonlight a few months back and while the price tag could induce a coronary....I could happily hunt with it until the end of my hunting career and never look back.

There are plenty of old gun hands who dismiss the .308 as "inferior" or "weak" or any other such nonsense claims. Reading some of the older writers, they claim it's only good for Girl Scouts or to cycle through the M14 shooting diminutive Communists in some far off land. It was poppycock then and it still is.

I'll not bore the reader with the tale of the .308- that history is well documented- but we'd do well to remember that the ballistics that made the storied reputation of the .30-06 are exactly the ballistics offered in modern .308 ammunition. A 150gr at 2800, a 165 at 2700 and a 180gr at 2600. Modern .30-06 ammunition will typically get about an additional 100 feet per second added to those figures in sporter length barrels. It's my experience that those 100 fps do exactly nothing in terms of greater wounding or trajectory over typical distances. The bonus is that the .308 is available in some really great rifles- of particular interest are the super light rifles and carbines like those from Kimber and Sako. There is not a real advantage in picking the .308 in a 9 pound rifle.

However, a 6 pound rifle is a completely different matter and a short action will typically drop 6-8 oz from the weight of the action. It's no trick to get a hunting ready rifle in .308 under 7 pounds and not unusual to get under 6 pounds. The .308 case is a model of efficiency and gets full ballistic potential from barrels as short as 20". A svelte little carbine like the Sako Finnlight or Kimber Adirondack might give you a tangible advantage as you climb through 5000' or whack your way through some alder choked hell. That's a much more tangible thing to consider than some arbitrary numbers in a ballistic table.

We'd also do well to remember that while a certain level of power is desirable, ability to shoot proficiently is mandatory. Having cool nerves and utmost confidence in your ability will serve you better than the latest "uber magnum" headstamp. Knowing where to shoot something and that the bullet will hit what you aim at is far more important than any other factor in killing animals. There's a 9.5 foot Kodiak bear that learned that last week... and we should too.

While we're on the .308 I have question.
For what we in the south on England call Woodland Stalking a short [moderated] rifle has significant advantages whilst clambering in and out of the Landrover or shimmying up the ladder into the highseat. I've read that the .308 works well in the shorter tubes, what other calibers might be worth a look?
SBW

If I were going to build another carbine rifle the .338 Federal would get a real long look as you also have greater bore diameter to work with. A friend of mine has a 20" .338FED and it easily runs 2800fps with 180gr bullets and 2650 with 210 Partitiion in his handholds. All out of a 6 pound rifle. That's pretty amazing. Lack of factory loads is the only drawback.

With modern powder the .308 family is just a model of efficiency. I think on your side of the pond, a Sako Finnlight in .308 or 7-08 with a moderator would be tough to beat for everything you guys hunt. Not sure about your local market, but a Steyr Scout would be tough to beat as well- here the pricing has dropped some over what it was a decade ago.

Hodge
Having shot a couple SAKO would be my benchmark choice, I'm currently leaning towards Blaser probably a R93 until the price of used R8s comes down a bit. I like takedowns, I love the trigger and, the ergonomics suit me. When i was looking at the rifle as solely a hunting tool, tops of 200 rounds a year, I was keen on more interesting calibers like 7mm08 and the 6.5's . Where .308 becomes a contender is I can use it to shoot cheap club ammunition in competition and use it to put deer on the ground. If its true that Blaser are going to bring out a 22LR rig for the R8 that would make it even more tempting as i could practice three times a week with the same set up.
SBW