It's Officially Spring... Although it doesn't feel like it. 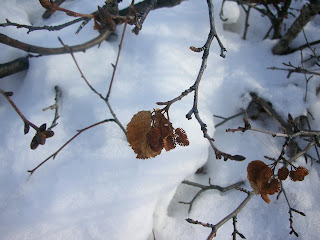 March 20. The official first day of spring here in the Northern Hemisphere. Also known as the Vernal Equinox our old lob-lobed planet has spiraled its Northern Pole more toward the Sun and voila- tomorrow we'll have more daylight than dark. On this day we have an equal amount of sunlight and darkness. Here in the North country this brings about some remarkable changes- even though the temperature remains a balmy -5F this afternoon the weather has a different feel to it.


The sunlight is no longer the meek beams we receive in January with little warmth, these rays have some power as winter storms give way to blue skies and the sun climbs higher in the sky with each passing day. Our air temperature remains chilly but the snow cover and ice choked waters are absorbing those rays and the snow is getting softer and the ice on the lakes is starting to melt-from underneath. The ice on lakes will be safe to travel for some time now but the wary winter traveller will avoid river ice after the equinox to avoid being caught in overflow or crashing through eroding ice.

A friend of mine wrote today and the bears have left their dens for the first time in South Central Alaska and several residents of the Anchorage bowl reported fresh bear tracks in the snow. The bears will return to den several times over the next few weeks but they will be out and about soon enough. Here in the Interior we've likely got a couple more weeks until the snow gets drippy and drives the bruins from their dens but spring isn't far off.


Bird activity is picking up as well and although the migratory birds aren't on the scene yet the chickadees are making lots of noise and activity in the forests. The squirrels aren't to be outdone and are frequently seen plowing their way through the snow. The excess daylight has triggered the responses in animals and all of nature has started to awake- even the willows have taken on a different appearance as their buds have begun to form under the bark. In our human species the equinox was marked or celebrated around the globe as a great awakening and nowhere is that more dramatic than here in the Far North. Over the next several weeks a land of ice and snow will be transformed into a thriving and plentiful land of tundra, marshes and boreal forest all due to the mechanics of a remarkable planet- a planet that isn't quite round.
Posted by hodgeman at 7:09 PM

Srping is my favorite time of year.. It just seems like world comes alive again!!

Down on the other side of the rock, I lit the fire for the first time this year.

It's officially Spring in Northern Michigan too, although it snowed this past weekend. I'm ready for leaves and warmer temperatures, but we're probably a month or so away from that.

Just stopped by to say Welcome to the OBS. I'm pleased you've decided to join us.

I was able to open up all the many windows in this old place for the first time and let the outdoors come in. I love the fall and the winter for many reasons, but the warmth is a welcome return.