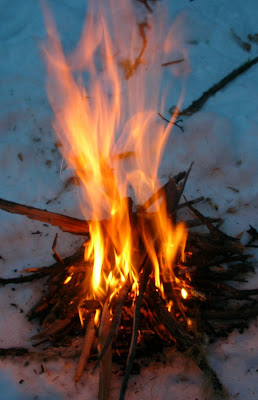 One of my first exposures to the Arctic was a familiar one- Jack London's classic short story "To Build a Fire". While a young boy reading this in rural East Tennessee, I had no comprehension of some of the concepts being thrown out. Fifty below zero, dogsleds, hands going numb and being unable to grasp a knife or use a match, and the descriptions of the terrain made the boreal forest of Alaska and Canada sound more akin to the surface of Mars than toward our own pole. I was fascinated beyond belief and his story remains one of my favorites.

I find it somewhat ironic that thirty years later I have my own young son and that we are moving through those same forests and terrains that London wrote about and at this point I've spent almost tenfold the amount of time London actually spent in the North. (As an aside London was only here 1897 through 1898 or about a year.)

But the constant of the story is that of fire and its a skill I practice and make my son practice at every opportunity. Chances are in the North if you can make a fire you're going to make it through whatever just went wrong. Falling through the ice, becoming stranded on the trail, becoming injured all can prove fatal without a means of generating warmth-so being able to quickly start a blaze is a critical skill for the intrepid person of the forest.

Evan and I went out for a quick run through the nearby forest today on the snow machine looking for various tracks and to check if the marten and ermine had went to work on the fox carcass that I returned to the woods recently. We saw abundant tracks in the fresh snow and a couple of moose stripping what they could from the younger trees. Bright, clear and a balmy 5 degrees Fahrenheit. One of those wonder days in the Interior.

We had received about a foot of fresh snow in the last couple of days and the machine was really kicking up powder and it was a lot of work to wrestle the machine through the trap line trails. After an hour or so my son asked if we could stop and build a fire. Never one to miss an opportunity for a teachable moment I decided the fresh snow load would make a nice challenge to fire making.

Evan set about to gathering materials for the fire as soon as we stopped- dead branches, birch bark, twigs and "old man's beard" among other things. I showed him how to build a base on the snow to keep the fresh flames from melting the snow underneath and extinguishing the new fire. Evan did an admirable job of gathering material and making the fire lay but insisted we start the fire with flint (ok- it was ferocium rod but close enough) and steel. He often lacks the strength in his hands for the unwieldy device and by this point the cold had already numbed his a bit so I got to do the chore of making shavings and sparking. Bummer- I was really wanting Evan to do it. Nothing gives you a feeling of success like lighting a fire when you're cold, particularly with a primitive method.

A fire lay that a person has even half a chance of lighting with flint and steel is easily lit by a more modern method so I was confident Evan could have lit his with the matches he carries in his pack or with some of the other methods in the snowmachine's gear. The attention to preparation of the fire lay required by flint and steel is exactly the reason I like to practice it so much. Experience with others in the woods has often shown a total lack of knowledge of tinder, intermediate tender, and twigs among the novice. The inexperienced often attempt the "light the log with a match" approach with the predictable consequence of failure. An instructor whose class I attended last year gave excellent advice- "...practice fire making under every adverse circumstance before you need to. If they're going to find a corpse make sure its in the aftermath of the forest fire, not frozen and surrounded by burnt out matches."

Sounds like good advice to me.
Posted by hodgeman at 7:58 PM

I'm reduced to a BBQ grill here at the complex, but I already have three or four accomplished fire builders. It is an important skill to acquire that could be a life saver regardless of latitude.

Over here the problem is it is always wet. We have a lot die in the outdoors at what you would call spring temperatures. It doesn't get cold like you know it, but hovers just over freezing with a killer wind chill.

But getting back to fires, so many now don't know the basics- like shaving the right wood nor do they have the patience to slowly build the fire up or the knowledge to pick the right woods and we have a few that burn well green. They all rely on gas cookers now.

I have never been NOT able to get a fire going. Whatever the conditions- that has saved my life more than once!

Another good one. Always love to hear folks take on the "To Build A Fire" idea. I think I'll have a piece in the next BHA Journal. We'll see. Definitely not a way to make millions...oh well, its still always fun to hear ourselves wind-bagging! Take care! Best,
David C