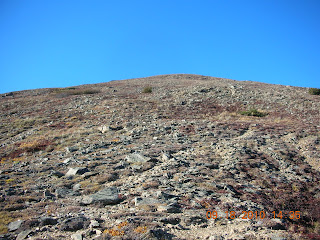 I stopped for a moment to rest on what passed for the trail up the scree slope. The trail started somewhere far below and to the east and at the highway as a jeep trail and had become somewhat smaller and less used as the altitude climbed- now it was a barely discernible goat track headed up the steep slope with innumerable switchbacks. We had met a couple of other hikers who had turned back several hundred vertical feet ago- too steep to continue they said. I fancy myself a rather passable hand at wilderness navigation and I had totally lost this thin trail several times over the last half hour- not that it made much difference; the only real way was up and all the terrain appeared universally steep. I adjusted my pack straps and stowed my sweaty hat in a pack pocket and dug in- making vertical progress a mere six inches per step.
We had been climbing this local terrain feature (known as "Donelly Dome") for about an hour and a half and by my dead reckoning we were about 300 vertical feet from the summit. We had set out to climb this loaf of rock but had found the usual access route up the northern edge closed due to Army training. I knew the location of the southern access route, or at least the beginnings of it, from our rabbit and birding forays in the area but we had never climbed it. I had seen other climbers perched there like mountain goats from the valley floor below but the route looked too steep to encourage a casual climb. I had always used the northern route which followed a much gentler ridge edge that was entirely due to the formation of this peculiar loaf of rock.
Donelly Dome is what geologists call a "fleigberg" or roughly translated into non-geologist parlance- a mountain overridden by ice. At some point in earth's distant past an ice age occurred and a massive glacier had scraped and plodded its way down the Delta river valley, making mountains into molehills and leaving the ground up debris smoothed out on a large valley floor between the Alaska and Granite Mountain Ranges. That debris is called "alluvial till" and most of it is the consistency of sand or small chips of granite to give you some idea of the destructive power of a glacier. But for some reason when the ice sheet contacted the feature that would become Donelly Dome the sheet split in two- sending rivers of ice down the Delta river valley to the west and the Jarvis Creek drainage to the east and no small amount of ice up over the top, like a round stone barely submerged in a rushing trout brook. No one really knows why the irresistible force of a mile deep river of ice spared whatever geologic feature lies beneath this mountain.
The resulting formation was a huge rounded dome standing quite alone in the middle of an alluvial plain with a trailing edge that tapered gently back to the valley floor over some three miles. The leading edge of this dome was a rounded feature that was uniformly steep (approaching 45-50 degrees) to a summit that was not quite a couple of acres in size. I had been up the trailing edge trail to the north which was much longer but only approaches 30 degrees in a couple of spots. The south access starts at about 1000ft above sea level and climbs to 3910 feet in just over 1/2 mile horizontal distance. Any steeper and one would need to use technical climbing gear- this was about as steep as "walk ups" tend to get.
This particular trail seemed to switchback from rock formation to rock formation as it climbed steeply up the face. The entire south face of the dome is littered wit 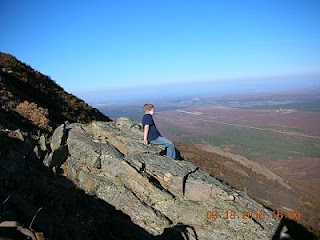 h what geologists term "erratics"- giant pieces of rock that the forming glacier had deposited in this unlikely place when it receded. Car and house sized chunks of granite haphazardly strewn about like a toddler's Legos on a set or stairs. The trail seemed to track to these boulders and I didn't complain- the uphill side of the giant rocks offered the only horizontal space to rest on the entire mountain face. Evan named one such feature "The Crack"- a house sized square boulder with a near perfect notched cut right through the middle. It was easy to imagine a Native hunter or perhaps an early explorer crouched away, out of the fierce wind, using the perch as a look out for the carribou and moose that roamed the brushier and fertile river flats that stretched for miles beyond.
Somewhat abruptly we toppe 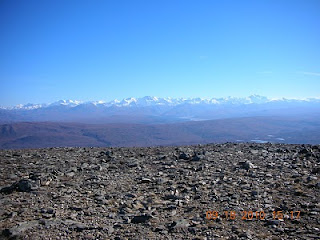 d out on the mountain and walked slowly to the summit marker as a cool wind hit us from the north west. We had been shielded from the wind while climbing the sun beaten south eastern face and had worked up quite a sweat. It only took a few minutes in the stiff breeze to dry that perspiration and give us a chill so we broke out a light jackets to offer some degree of protection and took some photographs. Our intrepid canine companion found a couple of milk bones among the usual cairns and sundry mementos that often mark the summits of visited mountains and ate them with delight. I felt quite fortunate since we had neglected to bring along a dog snack and had only brought a few items for ourselves.
We explored over the rock strewn summit for perhaps a half hour. The ground was covered in short lichens and several species of low bush berries- the wind was too fierce here for anything to grow very tall and anything over an inch tall seemed wildly formed by the prevailing winds. Rocks that the retreating glacier had left behind were scattered about- granite, bowling ball size pieces of pure white quartz, flint, and all kinds of other mineralized debris. We climbed over boulder piles that housed enormous colonies of arctic ground squirrels and another that had a colony of collared pikas- fascinating creatures that build hay barns among the rocks for a winter food supply. We also stumbled upon what appeared to be an old, small bear's den that foxes had taken over and turned into a home of sorts- I hope they aren't disappointed if the grizzly returns to his denning site for another winter!
After a few more minutes of lingering at the summit we tur 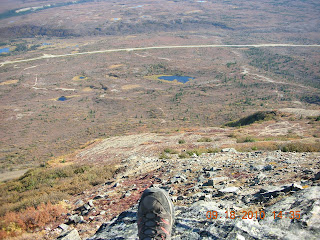 ned and headed back down the trail. I dreaded the climb down as I believe more climbers and hikers are injured or killed on the descent than the ascent. When tired muscles and sloppy reflexes make holding back gravity more difficult. On the climb each foot of vertical was a hard won and laborious process but the descent was effortless- controlling the rate of that descent however was not. I had made the climb down the more gently slope north trail in long bounding leaps at a jog in a mere 20 minutes. Here, just fighting the sliding effect of the loose scree required intense concentration with every step.
It took well over an hour to descend the southern face. Exhausted and wind burned, we turned the jeep toward home.
Posted by hodgeman at 7:20 AM

What a great place to live, nicely written too
Cheers
SBW

Oh lord, those photos give me the heebie jeebies! I'm not a big fan of descending.