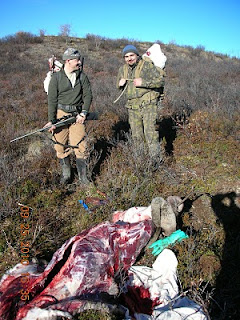 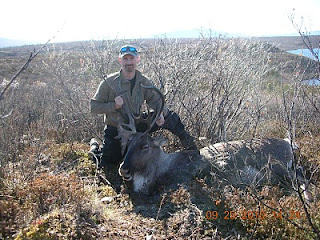 ndered my muscles rock hard and I didn't realize the muzzle braked .338 being fired 10 feet to my left side had rendered my near side ear a ringing mess. I was focused so intently on the bull I don't recall feeling the sear break or the rifle even go off. My position was wonderfully stationary and I remember a feeling of extreme confidence even though the distance was pushing my limit for field shooting. BOOM! My .300 rang out again and I cycled the action from the shoulder to have a fresh cartridge ready. I distinctly remember hearing the sound of bullet striking flesh.
When I found the bull again in the scope, his rear quarters had collapsed and his neck arched downward over his locked front legs. I knew he was hit well but I kept the crosshairs resting on his shoulder, ready to fire a second time and immobilize him should he regain his feet. Bill, again watching through his powerful binoculars declared,"Don't shoot him again! He's hit very hard!" As if to 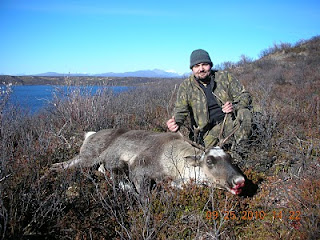 add punctuation to his words still hanging in the thin mountain air, the bull fell over and was stone still.
We quickly reloaded our weapons, checked the safeties and made our approach. The shooting had only lasted 3 or 4 seconds and was decisive in both nature and execution. We had achieved our goal of two bulls without undue shooting or wounded animals escaping. We found the first bull just a few feet over the far side of the ridge in a slight defilade. He was still struggling ever so slightly although hit fatally. Probably entirely unnecessarily, Bill humanely dispatched him with a point blank shot to the spine. The tenacity of these animals is simply amazing; when we field dressed him we found that my first shot had drilled through both front shoulders and destroyed the lungs and Chad's second shot had ruptured his aorta and destroyed any remaining lung tissue. That he moved at all is testimony to the incredible toughness and tenacity the Alaska wilderness breeds into these animals. We then proceeded just 20 yards further down the trail and found the second bull in a heap- he had died nearly instantly from a textbook perfect double lung and heart shot. 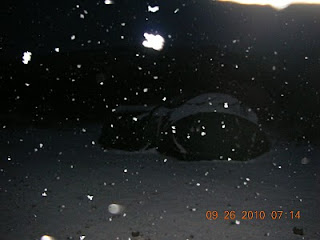 We had made our meat for the winter. Now the real work would begin. We camped that night on the gravel bar after 7 long hours of field dressing, quartering and heavy packing from that ridgtop.
We didn't realize it but it would snow heavily that night and the remaining caribou would vanish by morning.

Wow, what a tale!

Do I read correctly that hunters were being cited for spoilage of meat they were dutifully trying to pack out after a hunt? Because that sounds a little over the top.

I was very glad, though, to see that your friend dispatched the bull with that spine shot. No reason to let an animal suffer. But wow, you sure are right about the resilience of animals - to still be moving after shots like yours is just stunning.

Holly, yep you read that correctly. AK laws about wanton waste are very tough and rigorously enforced. There is some discretion at the point of contact with the trooper who will make a determination if you behaved reasonably but if you drop 1200 lbs of moose your party better have plan that doesn't include hanging meat in camp for 3 or 4 days at 75F while your buddy tries to bag another one...
I'm thinking of doing a piece on field care in the future. Most folks in the L48 can have meat out of the field same day- up here it might be several days to even get back to the road system. One of the reasons I like cool weather and winter hunts.

Wow! Great story. I would LOVE to go on a caribou hunt some day. It is one of my dream hunts. Thanks for sharing this and congrats on filling your freezer full of meat!

I would like to see a post on field care; always a good thing to brush up on regularly!