Well my gentle readers, I've been tracking an emerging Alaskan debacle for some time up here. I've hoped that common sense would prevail and it may yet but I thought this might be an opportune time to share with you folks some of the Far North Craziness that's going on currently. 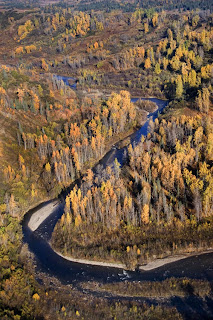 It all centers around a non-descript river on the west side of Cook Inlet called the Chuitna. Its a meandering little thing and virtually unknown in wider circles, not famous like the mighty Yukon, or the fertile Copper, or even the Susitna. But the little river supports a diverse number of critters and is home to all five of the Pacific species of salmon as well as Dolly Varden. It drains some 25 miles in its final form to dump into Cook Inlet.

Its what lies under that drainage that is causing all the ruckus. Coal.

I grew up in coal mine country so I know a thing or two about coal mines and the toll it exacts on the environment. I've seen first hand what "mountain top removal" and "strip mine" look like from on the ground. I also understand something of the politics of energy extraction and have also seen first hand some of the human costs involved in the mining industry. I understand that our nation needs energy and people need jobs and good jobs in many areas are hard to find. In areas where many mines operate a good job is as rare as hen's teeth. But what PacRim Company that holds the lease on this region is proposing to do is bordering on the unthinkable.

What the proposal calls for is the complete removal of the Chuitna watershed in one massive open pit mine. Not only will the Chuitna all but be consumed, it will alter the water table level for a region of some 30 square miles- or about the actual size of a medium US city. And to add insult to the injury they include in the proposal that they will remediate the entire area back to its original condition. That's akin (as one of my friends wrote in an op-ed piece) to disassembling a 6 layer wedding cake, moving it to another room and reassembling it...with a single spoon.

Some numbers and illustrations for you guys to wrap your noggin' around.

The mine would operate for a proposed 25 years and each of those years would see roughly 12 million metric tons of coal removed. That equates to a hole that's 100 yards wide, 100 feet deep and 10.6 miles long...every single year for the life of the mine. I don't know about you folks, but that's one big hole. How a company proposes to remediate this area one quarter of a century in the future remains to be seen and an estimate of what that remediation would cost and how long it might take have not been released but its safe to say that the remediation effort could well exceed the profit from the entire enterprise if inflation and energy prices continue to increase at their current pace. I've got to wonder if the PacRim company even intends to follow through on its remediation effort and won't just belly-up after the last of the coal is sold and burden the taxpayers with this kind of operation.

As you can tell, I've got something of a burr under my saddle about this whole thing and here's why. First of all you'll destroy an entire watershed with a questionable plan of remediation. That watershed contains salmon and salmon streams are protected as the Holy Grail of land use in Alaska. It is a crime to ride an ATV through ANY salmon bearing stream and next year felt soled waders are verboten so my fellow anglers won't transmit wee beasties between healthy and diseased fish stocks. Alaskans tend to take fish serious. Real Serious. Apparently though, if you have the bankroll of a mining corporation you can grease enough palms to get DNR to write you a permit for tearing the whole thing out...as long as you promise to put it back.

My second big qualm (in a fit of nationalist fervor) is that the coal mined there isn't going to be bound for the good-ole US of A to help us in our energy needs. Nope- its all bound for Asian markets, primarily China. In China it will likely be stuffed into a power plant Western engineers and authorities would have regulated out of existence in the 1950s. So while we all like to think "green" we'll be slitting our own throats by encouraging foreign nations to burn cheap coal in a cheap power plant. Heck, CO2 emissions stop at their border don't they? While we like to think about clean energy, green energy, and alternative energy- we'd be supplying a nation that's demonstrated little environmental consciousness with 25 years worth of black energy.

My third and perhaps biggest fear with this endeavor is that we are about to set a precedent. A precedent that allows a private company to invade our wilderness areas, rape its treasures and essentially take the money and run; all in the name of "best use" and "energy stewardship". In the future, any company could make a case to destroy any wilderness area they deem necessary as long as they promise to make it all better in the end. So I think in the long run without citizens intervention, the Chinese will get the coal, PacRim will get the money, a handful of folks might get a job, and all of us will be left with one big hole in the ground.

A scar where a river once was.

http://www.obviouslaw.org/
Posted by hodgeman at 10:17 PM

Oh my gosh, just reading your post made me sick to my stomach!

Some of the things that go on in this country concerning our natural resources are just plain ol' wrong in every way.

Keep me in the loop on anything I can write, scream about, rant, etc.

I will be refering to and linking to your post ASAP. Taliban allowing of course...

To quote a recent president, "I feel your pain."

In places like eastern Montana, strip coal mining doesn't change the landscape much, but in the area you describe, returning land to its original state is impossible.

Reminds me of the great mineral deposits in and around Butte, Montana. It had a great wealth of copper, zinc, gold, silver, etc. Today, after the mining companies left with their pockets full, the Berkley Pit, and over 50 miles of river downstream are one of the largest EPA Superfund sites in the nation, and it is tax payers, not mining companies that foot the bill for Superfund reclamation. Additionally, reclamation in some parts of this site consist of removing only 60% of the toxins--it is said that removal of 100% isn't cost effective.

PS. I got your email. I am no longer in Wrangell, but back in Montana.

The brass neck of it! The sheer audacity of the claim that the pristine wilderness could be returned after such wholesale plunder. Then there's the point you raise about the end products export. Madness.

I'm guessing that the situation where you are will mirror here, a grubby elite will line the pockets of however helps them get elected by an uninformed and disaffected electorate.