Recruiting Our Next Generation (and our current one too)

The other day I was reading one of my favorite blogs, Al Rasch's The Rasch Outdoor Chronicles, and came across this little gem- Safeguarding the Future of Hunting and Fishing. I highly recommend everybody just follow the link and read some of Al's work and educate yourself on the state of the hunting and fishing population today. I particularly like the words, "And it is time we cut the crap and did something."


I love Al's direct approach to the problem of the shrinking opportunity for new hunters into the sport and; rather than digress into a bunch of mamby-pamby hand wringing a lot of folks who have to bring us bad news participate in- Al jumps right in and give several practical steps that the reader can implement with a little good-old-fashioned effort. 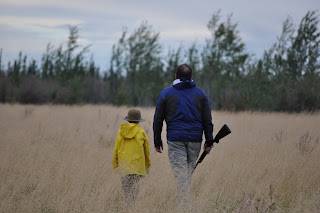 In my middle age I find myself drawn more into the role of teacher or mentor more and more- not that I'm some great expert hunter. I'm just a guy who likes the outdoors, loves the chase, likes things that go 'BANG' and occasionally I like to write about it. I've been able to take several new hunters into the field in the last few years and I find that hunting with these folks is incredibly satisfying. When I first started inviting some of the new folks hunting, the reaction I got from some fellow hunters was downright disheartening. I was met with complaint and accusation about stealing spots (which I find laughable as heck up here in AK), being burdened with inexperienced folks, being hindered in the chase, even endangering myself and others.
Nonsense.
So I found myself hunting with new hunters more and more and my former companions less and less and downright enjoying it. So rather than try to add to Al's work (which needs nothing added) I'd like to give some random thoughts that I've had about introducing new hunters in the field.
When hunting with inexperienced hunters, I find myself going slower and focusing on fundamentals. We often stop to look at sign and examine tracks and scat and I often find myself teaching about the habitat or the quarry or other animals we might see. I also find myself focusing on fundamentals and the fundamentals are what gets your game. By focusing on the fundamentals of habitat and habit I'm convinced when I'm hunting with newbies I'm getting far more opportunities than I might otherwise think. I believe as we get more experience the less we consciously "hunt" and instead we just go out by rote- repeating what worked for us before and the critters might just have a different plan.
I also highly suggest that you prep a new hunter before spending time with them in the field. Teach some field basics- like clothing and gear they'll need to bring to be comfortable, what to expect if you do happen to harvest something and how you'll care for that meat you might get. I also suggest you develop a hunting plan and go over it in detail with them- where, what, how, what to do in an emergency. I find that new hunters are more comfortable in the field if they've been given a few simple lessons prior so they feel they'll know what to expect. I generally suggest a hunter's education course for everyone and in many states it will be a requirement for younger folks prior to purchasing a hunting license. I also suggest that you not suggest watching hunting television or videos- they tend to portray an image that is fantastical rather than reality and overemphasize the kill over the entire experience of hunting.
For a new hunter that isn't really experienced with firearms I suggest sticking to one rifle- yours. You can always let them borrow it for a shot and you'll avoid some potential heartache/headache by having a total greenhorn packing a smokepole around you. I also like to spend a couple of range sessions with them if they plan on harvesting game so I can observe and explain gun handling rules. I've seen enough abysmally bad gun handling in my day to not want to see more of it- particularly in my camp. For shotguns hunters, I'd suggest going for a few rounds of skeet or sporting clays with your new recruit prior to heading into the field. Believe it or not, I've found many curious "pre-hunters" prefer not to shoot game at all but are quite intrigued by tagging along with you to watch and participate as you shoot game. My best hunting partner (now relocated to Texas) seldom carried a rifle and never a tag- he was an enthusiastic outdoorsman and world class field hand but he had no desire to shoot game himself. He loved the chase more than anyone else I ever met however and was a first rate packer. As much as it sounds like heresy, I'm not so sure the act of pulling the trigger defines the bulk of the hunting experience.
Make sure your new recruit is properly outfitted- particularly if that recruit is a child. Nothing bothers me more than to see a hunter complaining about taking his child because they "whine" and then see that child is decked out in the best bargain bin Wally World gear they could find. Rule of thumb when dealing with the inexperienced- make sure their gear is the equal (or superior) to your own and pay attention to the weather. When the new hunter (especially a child) gets cold and wet the hunt stops being much fun. A little judicious gear help and a small stash of loaner articles can go a long way toward keeping your recruit comfortable.
Above all when dealing with a new hunter in the field- whether you're on their first expedition for big game or a local squirrel hunt- use patience. I think back at my experience in learning to hunt and I can only imagine the stress I placed on my father and grandfather but they exhibited patience in dealing with me and its something I strive to exhibit with those I teach.

Those are some of my thoughts for dealing with new hunters in the field in a direct manner. In a few days I'll try to post some things I think we can all do to portray hunting as a positive experience and assist recruiting new hunters in an indirect way.
Posted by hodgeman at 9:43 PM

For me, there is one main rule I consentrate on, and that is keeping the muzzle pointing in a safe direction at all times. That taken care of I will share other knowledge, but always I am watching that muzzle. That is where the new hunter should be consentrating all his/her attention, even if they learn nothing else for a long time.
http://woodsrunnersdiary.blogspot.com/

Could I volunteer my services as a test subject for enrolling the 'middle youth' segment of new hunters?
SBW

I think these are great points, especially the clothing ones because your right, nothing puts the big ka-bosh on fun like not being comfortable. (and I know this first had because I am ALWAYS cold!)

SBW... come on up anytime. I'm sure we'll hunt or forage something.

KMurray...I learned that one the hard way. My son now has better gear than I do, and its fine with me.

I'd love too
SBW

Quick note till tomorrow! Thanks for the hat tip! Great idea, and I would like to expand on some of your ideas also.

Many of your points were crucial for me when I was becoming a hunter. My uncle was able to provide many of the things you suggest, including answering my endless stream of questions. Even though we could only hunt together occasionally, his knowledge and support--often provided via email--were invaluable.

It is really a fact that we have to do more to bring in more hunters. It's my buisness (Outfitting) and without a new generation being invited to experience the hunt, there won't be much to do!

I’m enjoying your Blog! I found it through my friend Albert at The Rasch Outdoor Chronicles™. I’ll be reading your archives as the weeks continue. I’m getting ready for what will undoubtedly be a huge Snow Goose season, so I will be in and out for the next few weeks.

Excellent insight and advice. I've not been able to lure any female friends out hunting but I have taken a couple to the range and one is now an avid shooter.