After a brief review of my current battery of tents, I discovered I had nothing suitable for a backpack hunt into the DCUA for my upcoming sheep hunt. My tents were either made for base camping in winter, too lightweight to deal with the unpredictable weather at altitude during that time of year or just too heavy to think about lugging 20 miles in and 1.5 mile up.

I started numerous conversations with sheep hunters and mined them for all the data I could find out. My experience with that area is generally looking at it from 40 miles away during moose season and thinking -"I glad I'm not up there right now..." Most of the savvy sheep hands I spoke with reported that a season without a big storm is very unusual and most picked 4 season mountaineering tents accordingly. I even spoke with one hunter who was blown clear out of the Brooks Range and spent two days rolled up in his hopelessly collapsed 3 season ultralight tent- day three and hypothermic, he hit his rescue transponder. His advice- "Your tent is your make or break piece of gear between a hunt turning into an inconvenient adventure or a life threatening event. Choose accordingly."
I looked through a variety of websites and talked to several folks with experience in the mountains and one maker kept popping up- Bibler. A visit to the mountaineering store yielded a selection of Bibler tents and the two man Fitzroy looked the most appropriate for my needs. Weighing 6lb 6oz for the body and poles the vestibule and a handful of aluminum stakes brings it to just under 8 pounds. Very doable for two hunters to split between them Striking a deep discount on an off season deal, I brought my new mobile home back to the cave.

The tent is made of a single layer of "Todd Tex" and follows the current trend of "waterproof and breathable" fabrics. Frankly, I'm deeply suspicious of such claims and if I weren't looking for the lightest bomb shelter I could find I'd have never thought twice about one. The solemn endorsement of a number of experienced mountain hunters counted for a lot as well. The tent is rated for wind speeds that border on ludicrous and snowfalls of 24" at 32F- that's a heavy wet snow that would crush most any tent. I don't think it will be any better in summer than any of dozens of other tents and due to condensation issues inherent with single wall design may even be worse- but all indications are when the weather gets crazy, this is the bunker to be in.

After bringing it home I managed to carve out an evening on the weekend to throw the tent on the pulk and pull it a few miles with some other camp gear for a trial run during winter conditions. Impressive is all I can say. The fabric is textured and taut as a snare drum when pitched. I'm betting that properly staked and guyed out this thing won't even rattle in a stout wind, much less come apart.

The fit is better than some two man mountaineering tents I looked at. Most seemed to accommodate two hunters only if they're willing to spoon and forget about keeping any gear with you. This one will take two hunters without undue familiarity but the gear will have to go into the vestibule. 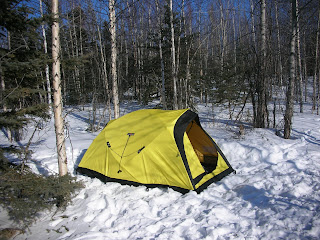 Here it is prior to staking and bunkering with snow near the summit of Bart Mountain.
Posted by hodgeman at 8:26 PM

I have you marked down as just as obsessive about gear as me, but with way more practical experience. So your recommendation counts for a lot.

SBW- yep, I've got to admit that "gear obsessiveness" is something I've got to work hard at keeping in check. I'm quite willing to purchase quality if its something I simply must have.

@arshad.... no spam links to retail sites in the comments please!