I must apologize for the dearth of posting lately as I've been very busy at work and the after work hours are consumed with family time and training for my upcoming sheep hunt.

I thought I'd share a little of my plan for sheep training. Besides eating right and usual exercises, training for sheep hunting contains a few items that I'm doing to give myself a leg up on the unique demands that mountain hunting dishes out. So in addition to routine cardio (jogging, walking, skiing) and strength training (core exercises, weight training) I'm including some new things in my routine.

First, you simply must get oriented to a vertical environment. Sheep live in rugged terrain where they can feel safe from predators with their incredible ability to run, leap and cavort up nearly sheer cliffs. Sheep respond to danger by putting vertical distance between themselves and perceived threats. That means you'll be climbing...a lot of climbing. After speaking with an acquaintance of mine who guides for sheep, it is apparent that mere cardiovascular fitness isn't enough. He reports that even experienced marathoners quickly tire if they tend to spend most of their time on flat land. The muscles required for running or jogging on flat land are not the same as those required to negotiate a 45 degree slope. He refers to the fitness required as being in "sheep shape" and insists that his hunters spend some time preparing in vertical environments, even in the office building stairwell if no mountains are available!

Even though I don't require a guide- I feel that is good advice and have incorporated my favorite fleigberg in my training regimen a couple of days a week. Training so far has been up the gentler north trail- a 2800 foot vertical climb over about a mile. The longer and much more rugged southern route would be suicidal with the snow and ice cover we still have on the ground. As spring arrives and the snow dissipates, I'll work in the steeper face and find a few other mountains to climb as well. With the arrival of full summer- the training regimen will be backpacking into the hunt area, climbing the mountains and looking for that toad sheep I'm looking to bag on opening day.

Second, sheep hunting often requires carrying crushing loads, for miles. A moose hunter may move a huge load of meat from the field, but few moose hunters hunt very far from motorized transportation and the terrain tends to be more forgiving as well. At this point my base load of sheep hunting equipment weighs just shy of 60 pounds...that's pre-sheep. Many sheep hunters report loads of well over 100 pounds after they harvest and bone out an animal among two hunters. Frequently if hunters are solo or carrying a lot of heavy gear they have to start the time consuming and laborious process of ferrying- splitting the load into two or three segments and having to transport their harvest and gear in relays. Every mountain will climbed and every mile walked- twice or more. Ferrying a load of moose meat a mile or so through the forest is one thing, ferrying 150 pounds 20 miles through the mountains is another thing entirely. The stories of heavy laden sheep hunters burning equipment or quickly establishing caches and abandoning some of their gear are legendary here. Every year some bear will root out and destroy several hundreds (or even thousands) of dollars worth of unattended equipment the hunter simply couldn't carry any farther. There is even at least one legend of a custom Sako rifle left under a rock pile the hunter never came back for. No wonder the diehard sheep hunters spend incredible amounts of cash buying the lightest and most exotic gear available.

Given the weight burdens that are foreign territory to all but the hardest core backpackers and professional meat packers- getting experience moving across the mountainous terrain with a load is paramount to success. In the light of that, my sheep guide compadre' suggests starting in the spring by hiking with a pack containing increasing amounts of weight throughout the summer. In this endeavor it is very possible to give yourself a training injury that will set you back weeks if you don't go slow and build up to the loads that you'll start your hunt with. At this point my pack weight is 35 pounds- essentially my day hunting gear and some extra "training ballast" thrown for good measure.

Another future suggestion is what my friend calls, "The Liquid Mistress". Simply a freighter pack frame with a 5-8 gallon water jug strapped on. At roughly 8 pounds per gallon it doesn't take much water to add up to tremendous weight quickly. You simply add more water as your regimen proceeds. A partially full container also has the added benefit of being a dynamic load- the water will slosh around as you move, requiring your muscles to constantly correct with each step. Since moving downhill is much harder than moving up (at least for me), the ability to simply pour out some water at the top to lighten the load before descending is a good thing if you tire quicker than expected or feel like you strained a muscle or joint.

Getting use to moving with a heavy, dynamic load in steep terrain is essential to staying safe in sheep country. A sprain or fracture will often scrub the hunt entirely and may cause you to abandon valuable equipment while you hobble your way out to civilization. More seriously a minor sprain or injury can also be a lynch pin in the chain of events leading to a catastrophic fall. Often the companions of severely injured hunters report to the rescue team that the hunter was injured minorly a day or two before and chose to continue the hunt with limited mobility. Staying healthy, agile and on your feet is vitally important on hunts like this.

In order to do the training required to achieve the level of fitness required, staying healthy during that training is important as well. Old injuries (particularly those to the back or joints) must be proactively managed so they don't flare up and leave you in worse shape than before. Personally speaking, given my history of an old and significant back injury, I'm seeing a health professional every week who monitors my progress and looks for signs that my old injury isn't coming back to haunt me. Given my exuberance for this hunt I could easily over train and be in bad shape by opening day. That would be a shame. For anyone preparing for a rugged hunt like this I can't stress enough not to overlook a local health professional or even a sports trainer to keep you on track. 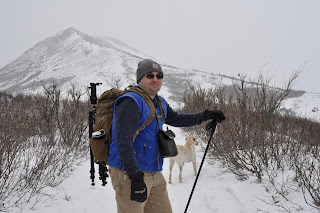 In the photo- departure for a training hike up the mountain in the background. Despite the fact I was dressed lightly for the 22F temperature and light snow, I was sweated through the merino wool shirt and fleece vest by the time I made the summit.
Posted by hodgeman at 6:36 PM

As usual you've come up with the goods.
The Liquid Mistress is the elusive obvious! i've seen people training with a 'slosh tube' basically a length of drainpipe and two bungs partially filled with water and carried across the chest, the same idea but mimicking the load to be carried is so simple its genius.

I wouldn't be the sad kit tart I am if I didn't ask which pack frame you'll be using? Mystery Ranch NICE at a guess?

You should be clairvoyant... the Mystery Ranch NICE 6500 is on the very (very!) short list of packs I'm considering for my hunt. I've got a couple of their smaller offerings and I'm very much impressed by the quality and functionality.

Currently I'm using a non-descript rigid frame that I found cheap several years ago. I've hauled moose quarters and bags of fish with it but I don't believe I'll try it sheep hunting. It'll carry a big load OK but it isn't particularly comfortable.I wouldn't want to wear it for several days if I could help it.

What makes you think I'm not?

Seriously, It's the pack frame I was looking at myself until I got a deal on the Kifaru Longhunter which has proved to be a very good pack (mine doesn't have the silly fleece panels) or (sadly) the gunbearer. I was going to buy the MR frame and strap a butchered pack I already have to it. I'm not really a believer in the pouches-on-pouches school of load management as I don't have to carry a hooj volume of munitions - mortars aren't deer or boar legal here. So that ruled out most of the Kifaru tacticool packs. leaving the MR.

If you do go for the MR I have a foliage load sling that I'd like to trade - rumour has it you've a fair pile of kit your Mrs would rather you shifted. :-)

I've always got a little pile of gear on its way to another home- international shipping be darned!

We can continue the correspondence via email.

Sounds like you've got a great plan for getting in shape for your hunt. I really like the "Liquid Mistress" idea. That's just genius!

Enjoy your time getting in shape. I'm sure your hunt will be here before you know it! (and I'm so looking forward to reading all about it.)

It sounds a LOT like marathon training in terms of the extensive preparation required. I'm envious - I'm sure training like that would help me shed a few pounds and feel a lot better. I love being in shape.