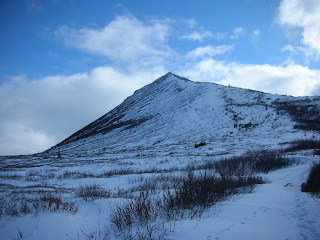 Here is the northern approach trail- a strong wind storm had drifted the trail in several feet deep in places. From this point the climb is 2900' vertical. 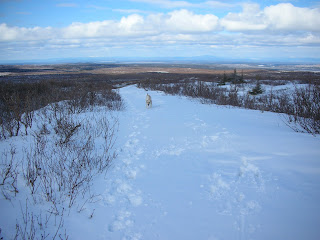 Half mile of post-holing across the relatively exposed flats leading to the slope- exhausting for me and the dog. 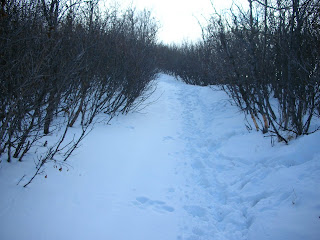 At the foot of the slope the trail starts its climb behind the lee of the mountain. Soft spots in the collapsing snow made footing unpredictable. 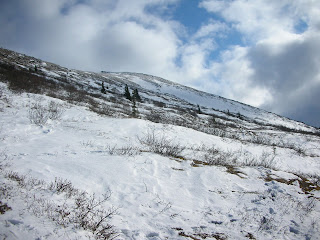 About a mile in- the trail to the summit diverges from the brush lined path and starts up the exposed west side. Bands of brush on the slope holding deep drifts had to be navigated around. Some of these were over ten feet deep and impassable. 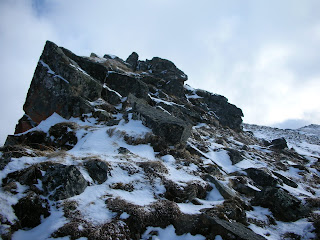 At the edge of the ridge the trail turns sharply up and south at this massive pile of rock. From this point on the climb is an exposed knife edge ridge and devoid of any vegetation taller than a couple of inches due to the prevailing wind. I was happy for Primaloft jacket in my pack at this point. 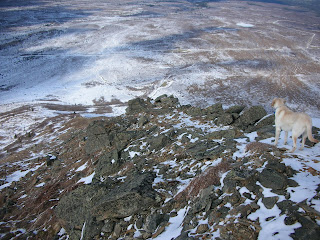 After many minutes of scrambling up the ice slickened rock, the view behind gives some idea of the elevation gained in the climb. Too much exposed rock for crampons and not enough bare rock traction for comfort. 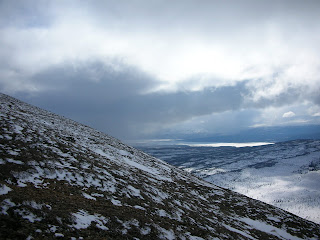 A view to the south shows the storm thats blowing in- this storm would dump several inches of snow prior to nightfall and pack vicious winds at this altitude. 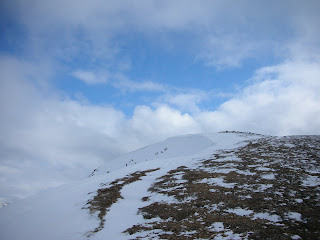 Pressing to the summit across the barren landscape. Note the wind loaded east slope- that cornice is 20' deep and will last for several weeks to come. 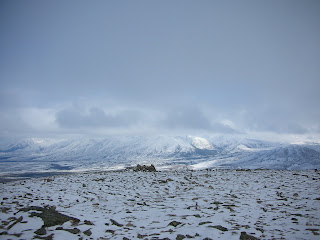 The approach across the summit plateau is a walk on an other-worldly landscape of bare rock and snow. The snow covered Granites in the background is where my sheep hunt will take place. 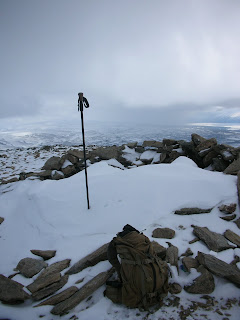 The summit cairn. Finally, after 2 hours 15 mins of hard hiking with a loaded pack. 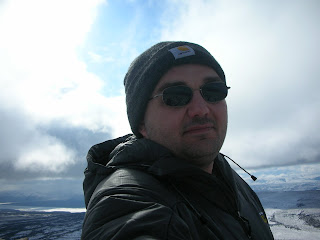 Happy for a summit break. A little water, some trail mix and a racing descent to beat the storm blowing in from the south.
Posted by hodgeman at 5:33 PM

That's gotta be better than the gym

Beautiful pictures! Such an awesome part of God's earth!

@SBW... I haven't been to the gym in a long time. Much prefer open air exercise despite the weather and the carnivores.

@Trey...You'd think I'd grow immune to the vistas living here, but if I ever do- I'll move.