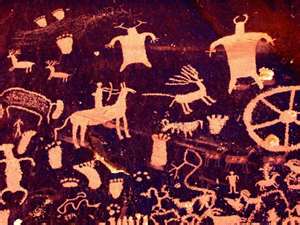 I just noticed that the hit counter on my blog crept up there past the 10,000 mark. Given that some well known blogs generate that many or more hits in a single day; that may seem a bit underwhelming at first read but I'm awed beyond belief that a mere handful of you folks would take the time to read any of my ramblings- much less 10,000 times. Along the way I've made several friends, maybe yet unmet and distant, but people I still call friends anyway.

I don't post nearly as often as many bloggers do and what I say perhaps isn't nearly as profound. I started this endeavor (and continue it, by the way) as a solely therapeutic pastime. Something to keep the mind and the heart and the will engaged on those long, cold nights and to share something precious and fundamental to me with the rest of the world. I don't do this for commerce or salary but for the pure joy of doing it. You see, my professional life entails a fair bit of writing- technical things mainly. Things about widgets and gizmos doing this and that in certain sequences and how the planet will counter-rotate if it doesn't happen in the prescribed Archimedian way. Things about risk analysis and economic profit and systems engineering. Things given to soulless, driven men who dissect and analyze and pontificate on- in order to chart a course and accelerate a plan.

I fell somewhat headlong into that gig by dint of being something of a technical geek with a head for engineering and science, a background in construction and industry as well as having a small modicum of talent for crafting sentences together to form coherent thought- a witty nerd if you will. I had enjoyed creative writing in my college career and even had a Literature professor push me to devoid myself of all that silly engineering crap and pursue a rewarding career in writing, even though she thought I had a written voice that sounded like Billy Graham with an attitude problem. I didn't take her advice (at least not yet) but I managed to publish a couple of items along the way (among much unpublished garbage I'll add). A few years ago I turned back to more creative writing as a way to vent the content of my soul and soothe the aching and pondering that middle age brings to those paying attention as life blazes past.

Perhaps I share that need to vent, maybe along with just loving to tell a good story, with those primitive folks whose dabbling on the cave walls show the bison and deer, fish and mammoth that made up their daily sustenance. Without written word, their arcane sketching show how they viewed themselves relating to their world. Hunter and hunted, predator and prey, death and life- clearly portrayed even a millenia later. Maybe I am affected with that same need- a modern man scratching out digital petroglyphs to leave some kind of mark that said, "I was here and I ate the caribou."

When I first started publishing this blog, I thought to myself-"If more than a half dozen people ever bother to read it then I will be doing OK." That bar was passed a long time ago. I have to convey a debt of gratitude to all of you who take the time to read this out of the endless content the digital age provides. Everytime I receive some bit of correspondence or comment about something I've typed- I get excited. A petroglyph seen and understood, a sand painting comprehended, a campfire tale that was remembered. Excited to be involved in the creative flow of ideas and information and ...thoughts.

Thoughts on the Great Outdoors.

Thanks for sharing with us. I always enjoy your writings. You do a great job! Keep it up!

A creative writer you are. I think you oughta change your blog name to "I was here and I ate the caribou" That line hit me perfect...think I even laughed out loud.

I too have always enjoyed your writing, you manage to be that rare thing: both entertaining and authoritative.
When I know something from personal experience your views echo my own, when you write about something new to me I trust that you know what you're talking about. If I had a top five blogs you'd be in it.