Scoring Fast Food...or the Caribou is Down. 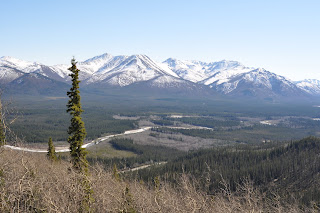 I was just recovering from my week of on- again/ off- again foul weather sheep hunting when one day at work my frequent hunting partner Dan came by my desk and asked about a weekend trip on his new boat. It sounded marvelous frankly- cruising the lakes looking for caribou or moose with a fishing pole in the water and a cup of coffee in my hand. All the while kicked back behind the console with a canvas top and Buddy Heater if the weather went south. It took me all of five seconds..."I'm in." I replied.

Dan arrived at the appointed time of 0'dark hundred and I quickly loaded my gear and away we went. We stopped off at the gas station and I fueled the boat and the truck while Dan went for coffee and doughnuts. A few adjustments to the tie downs and windshield cover and away we went  in Dan's big Dodge truck pulling the boat. We had a great trip down the highway and spotted numerous animals milling in the dawn light near the edges of the highway including a caribou who ran directly down the road in front of us for a half mile before veering off into the brush. It just felt like a great day to be hunting and I could taste success in the fall air.

As we turned down Denali Highway, the mists began burning off the numerous pothole lakes and patches of blue sky shown through the intermittent gray as the sun began its creep over the horizon. As we motored down the narrow and twisting highway we conversed about the coming fall season and goals we had for hunting as well as observing the changing fall colors of the blueberry bushes and willows. As we passed the boundary marker that announced we were now entering a "Subsistence Hunting Area" and validated the numerous tags we carried, I casually looked west at a rugged mountainside covered with several rocky benches and intertwined patches of moss...and caribou.

"Bou out the port side Skipper!" I announced and Dan quickly slowed the truck and pulled off the narrow shoulder. Finally feeling the momentum of the ponderous boat subside and the truck roll to a stop we jumped out to see the animals. This was ridiculous. We weren't even hunting yet. I had mixed feelings, this wasn't much of a hunt if we connected here on these caribou but then again- I had plenty of air in my freezer at this point.

"What do you think?" I queried as I heard Dan stuffing shells into the magazine of his rifle.

"I'm gonna put one in the freezer!" he answered and started across the road to line up a shot. Its illegal to shoot from, across or to a roadway in Alaska but you don't have to be very far from it to be legal in this location- just off the driveable surface. Dan stepped a couple dozen yards off the road to be on the safe side as I was foraging in the cab of the truck for my rifle shells and hurriedly playing catch up at this point. I had been caught unawares and this seemed almost surreal given the effort I'd expended the week prior for a mere photograph of a sheep, a mile away, through a spotter.

I was midway across the road when Dan, several dozen yards across the other side,  pulled up his rifle and fired offhand at a nice plump cow caribou at the edge of a small stone ledge- perhaps a hundred yards distant. I was trying to do too many things at once and this event was unfolding at high speed- running, observing, the animals, loading the rifle, watching Dan in the brush. I glanced up at the crack of the rifle and saw Dan's caribou fall headlong off the ledge. The sharp crack of the kugelschlag indicated the round had struck bone and the reaction of the animal indicated it was stone dead, even in mid fall. 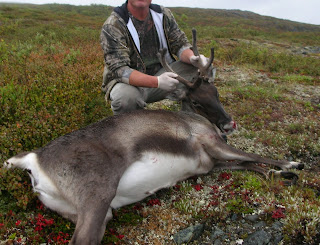 The small band of caribou now exploded into action.

Finally drawing up to Dan I looked up the hill, the caribou were running confused- dodging left and right, pouring up the narrow approaches to the ledges and back down the far sides. Sometimes with herd animals a hunter is often confused by looking at the mass of animals rather than individuals and I fell solidly into the category at this time. I raised the rifle and looked- the crosshairs wobbled with my ragged breathing. I probably hadn't drawn a single breath since rounding the truck and burning lungs demanded air, right now. Animals were piled thick into each other and it was entirely possible to shoot through one and kill or wound one behind it. A disasterous situation.

Closer? Unlikely given the speed at which the animals were moving away. Steadier? That I could do and plopped down on the rough gravel and assumed my favorite of all shooting positions- sitting. I looped up in the sling and drew tight as the animals finally slowed on top of a rock ledge at a distance we would later measure with a GPS as 255 yards. The caribou were still ganged up as I started tracking them through the crosshairs. A nice, fat cow caribou stood out in this small band but I held fire as I could see the legs of another caribou behind her. This was finally slowing down to a pace my brain could handle. The animals traversed the ledge south to north, headed for the lee of the drainage and safety.

"Got one picked out?" asked Dan. Obviously wondering if I was here to hunt or just watch with my mouth agape.

Through the scope I could see a phenomenon that I had observed countless times with all sorts of quadrupeds. Because ungulates have eyes on both sides of their heads they don't see particularly well forward or rear and since they have such limited depth perception with their visual arrangement, they almost always do the most peculiar thing. After an initial burst of speed when startled and a short mad run, the animals will simply stop to look around and see if they are pursued...generally broadside.

I tracked the mature cow and watched as she stopped on the ledge and looked around oblivious to our presence far down the hill. I also watched as the caribou behind her moved clear, providing an ideal, if somewhat long shot. Although it takes some time to write, the actual event took less than 10 seconds in reality. I evaluated- the crosshairs were marvelously steady with the rifle locked in with a taut sling and my forearms firmly on my shins and knees. The distance, albeit slightly longer than I normally like to shoot, was well within the capability of myself and the rifle. I looked carefully, flicked off the safety and took up slack on the fine trigger.

I applied the final fractional ounce to the trigger. Boom! The rifle cracked and I rocked back in recoil. I clearly heard the sound of bullet striking flesh, what the German hunters refer to as the kugelschlag. As I brought the rifle out of recoil I cycled a fresh cartridge into the chamber. I quickly found the ledge again in the scope but I couldn't find the cow again. The herd continued moving north and was soon around the ridge and out of sight.

All business, I calmly asked Dan, "Where?"

"Down!," he replied, "She flopped backwards at the shot and hasn't moved."

I scanned the area through the scope where I believed the caribou had fell, watching for the cow to recover from the initial shock and run off. Many hunters who follow up on game too quickly are surprised when their animal jumps up and runs off as they approach unprepared.

Nothing moving. I was nervous that one of the caribou now putting distance between us was carrying one of my bullets.

"Let's go," I said and we got up and started our climb up the hill. We quickly reached the base of the ledge that Dan's bou had tumbled down. The ledge was perhaps ten feet high and the cow was piled up right at the base. She had never felt the impact at the bottom. His .300 Winchester with a 150gr. bullet had hit the cow at somewhere near 3000 feet per second velocity at 100 yards. The impact force had broken the onside shoulder turning the shoulder blade fragments into secondary projectiles through the lungs. The bullet had punctured both lungs as well and still had plenty of momentum to completely shatter the offside shoulder and punch a large exit wound. Death had been instantaneous. We moved the cow onto a flat patch of ground on the steep hillside, marked it with flagging and got our bearings to continue up the hill to where mine hopefully lay.

We spread out about 50 yards apart and worked our way through the shin tangle and rocky ledges. We went up the steep hill slowly and looked out the ridge- there, perhaps 500 yards away, the rest of the herd had stopped and watched as we made our way up. I had just looked back and thought that I had surely went too far and passed the caribou in the brush. I also had the nagging voice in the back of my head- wondering if I had just wounded the animal and it made an escape as we had climbed up here. It had certainly taken long enough, perhaps ten minutes, to get here and the terrain had enough variation that a discreet escape unseen by us approaching from below would have been possible. I looked at the distant herd, watching for tell tale signs of a seriously wounded one- they all moved with the grace and posture that caribou normally display.

I pushed on and climbed a small, rocky chute to the next rocky ledge to get a vantage point to scan the brush below. The stones had been freshly dislodged as caribou had recently scrambled up this access to the bench above- a good sign. As I pulled myself over the edge of the ledge there was my caribou, stone dead where she fell. I felt a rush of relief as I examined the animal with the distinctive smaller velvet covered antlers. She was in excellent condition, plump and healthy- prime sustenance and wonderful table fare for my family this winter. I examined the wound- the bullet had entered just behind the shoulder, penetrated the vitals and after rolling her over saw it exited high lung through the ribs. Death would have been exceptionally quick and given the myriad of ways caribou die out here in this harsh land- maybe merciful to an extent since old age is not one of them. 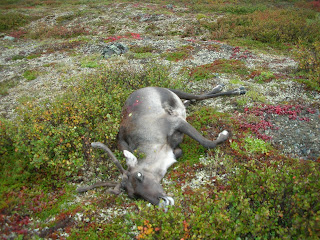 While the act of killing isn't something I particularly enjoy, I do take great satisfaction in being proficient at the task. If I cause an animal's death, I strive to do so with minimal suffering. I reflected for a moment here on the mountain with my animal- the caribou had went from alive and living free to quite dead in mere seconds. I wondered a bit about my own eventual death. Would it be as merciful or as quick? After seeing my father's lingering and prolonged suffering bout with cancer my views on death had perplexed me somewhat over the last year. I tired of such melancholy and dark thoughts in such a beautiful setting. Dan rounded a point a short distance away and we had lots of hard work ahead to do given our unexpected and quick success.
"Hey Dan...she's over here. Down in her tracks..."
Posted by hodgeman at 10:46 PM

With all that to carry I bet you were glad you were so near to the boat!
SBW