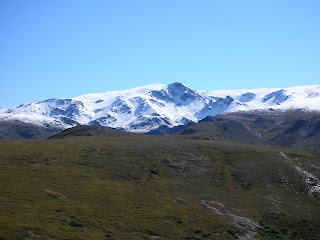 On Thursday morning, at about the second pot of coffee and something like the twenty-fifth check of the NOAA website the change occurred. It took me a minute to pick out the small change after days of viewing it with the same repetitive forecast that accompanies these huge, slow moving low pressure systems.

"Rain, with low lying clouds and decreased visibility in the Eastern Mountains" became instead, "Partly Cloudy with clearing in the afternoon and increased chance of rain in the evening". In other words- sloppy just became partly sloppy.

Before my browser could fully load the page I had already cut and pasted the forecast into a text message and forwarded it to my partner. We had a single day left to hunt and it appeared that our weather lock down was being given by a rogue high pressure system that moved farther to the East than anticipated and would (at least temporarily) push the low pressure monster back over the mountains into Prince William Sound. I received a text from my partner almost immediately- "Tomorrow? What are you thinking?". I replied, " Day trip- pack light, essentials only, hike fast for search and destroy. Leave at 7a, back at dinner."

The reply came back quickly- "Cool."

As we motored south down the highway toward the mountain valley that held our hunt area the weather forecast didn't look accurate as the wipers slapped in rhythm on the windshield. Looking to the north, behind us, the sky was clearing with some blue patches showing so there was some validity to the premonition of the weatherman. As we parked the Jeep, the rain had slackened and we were able to begin our climb in rain gear to protect us from the water pouring off the foliage we had to pass through. 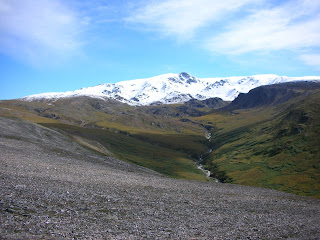 We had packed light- I only had my pack, rifle, spotter, rain gear, lunch and a few survival essentials along- probably a pack weight of 15 pounds total including my heavy tripod. My partner had packed similarly and we moved quickly up the trail toward the tree line. I was weary from the earlier excursions this week but I quickly had the soreness hiked out of my muscles and we broke treeline sooner than expected. We had covered five miles and several thousand vertical feet in just over two hours. We were moving fast over the broken terrain in anticipation of finding the broomed ram still hiding away in the cliffs at the head of the drainage. After being burned earlier in the week, we kept one eye on the weather, and as we gained altitude we could see the dark clouds of the low pressure system being held at bay on the summits of the mountains to our south. Once our current high pressure passed to the east, this system would reclaim the mountains with a vengeance. 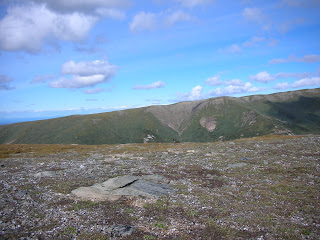 Moving through the rock fields we spurred the cries of hoary marmots, collared pikas and ground squirrels (all preferred food for grizzly bears). Each made a distinctive noise that signified their intruder alert for their colonies. As we crossed the high tundra to our over watch for the ram we found our resident caribou- still parading around like an energetic pony. Apparently he was living in anticipation of the coming rut. Every few hundred feet we would slow and scan the surrounding hillsides for any sign of sheep. The sky now perfectly clear, the sun grew intense and hot. Remembering our frigid and soaking experience earlier, I had only a wool watch cap in my pack- my beloved baseball cap forgotten at home. I was going to get a sunburn in one of the weirder twists in my hunting career. 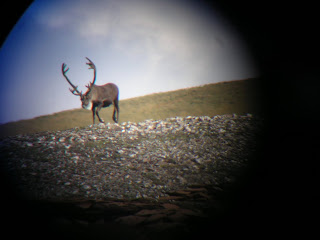 After a hard slog to 5500', we approached the ridge summit cautiously and peered over. We were both giddy with anticipation to see the ram in his favorite spot- hanging out with his two youthful sub legal buddies munching a favored plant that grew on the benches there.

The ram that wasn't there anymore. 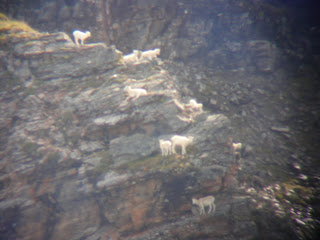 We looked very hard and over the next couple of hours picked apart every glen, glade, nook, cranny and crag with the spotter; desperate to get a look at the broomed ram. What we found was disheartening- all the sheep were clinging hard in the escape terrain. The steepest, most difficult and inaccessible parts of the mountain. Ewes, lambs, young rams- stuck on pinnacles and spires looking watchfully over the drainage below. But none was the mature ram or his two partners, they had vanished in the rising mist.

As we picked our way off the mountain the high pressure that gave us such fair weather was starting to wane and the first clouds off the storm began to pour in over the high passes. By the time we reached the jeep a light drizzle started to fall. I had been on one of the hardest and most rewarding hunts of my life despite not harvesting an animal. I was ready to call it quits and give my battered body a rest and turn my attentions to caribou season now starting to pick up in earnest and look for moose in the lowland bogs in order to put some delicious meat in the freezer for the winter. By the time we reached my home, the view south was a solid wall of cloud and rain and wind. We had spent the only precious clear hours of the early season where we wanted to be- on the mountain among sheep.

Sheep season was over for me. It was my first experience seriously chasing sheep but it would not be my last. My partner and I are already discussing next August's foray to chase rams among the clouds. 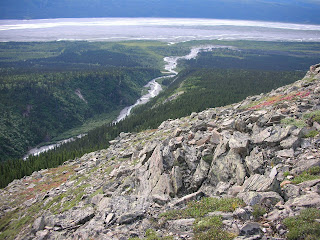 Great story, so what if you weren't able to close the deal, all the best tales fall in in cracks between our expectations.
SBW

Agreed- the best stories fall between our expectations. What a great hunt in dramatic terrain- the photos don't really do it justice. I find that I really enjoy hunting the alpine country.

Great story, I find the weather is the first thing I look at before any kind of hunt