Making Sense of a Magnum 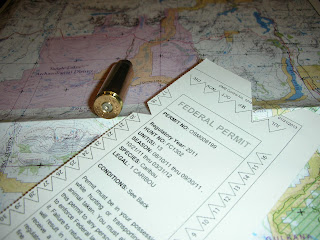 Its been a few years since I switched from my long held standard hunting cartridge to a "magnum" cartridge and what follows are some of my impressions I've developed while using it in the field. While the Internet is chock full of countless folks churning electrons and armchair ballisticians like to debate the minutiae between the various cartridges, I wanted to avoid that. I simply can't convince myself that a big game animal can discern the difference in a 7mm vs. a .30 caliber or 2800 vs. 2900 feet per second given a life studying such things in the field. But I've come to the conclusion that there is a difference between standard and "magnum" cartridges in the field and like everything else- there are pros and cons to examine.

First off, let's be realistic- "magnum" originated as a name for an extra large bottle of champagne and the term was applied to the early enhanced class of cartridges due to their larger case capacities. When the magnum craze hit the sporting community in the mid-20th century, the marketing departments of all the various manufacturers applied the term to all sorts of new products and cartridges whether they offered enhanced capability or not. For the purpose of this article consider any cartridge, .338 or smaller, capable of throwing a standard weight for caliber projectile to 3000 feet per second at the muzzle a magnum cartridge whether it has the title or not. For instance, all of the Weatherby cartridges easily make the cut but so does the 280 Remington Ackley Improved which gives up nothing to the 7mm Remington Magnum. The fireplug shaped 350 Remington Magnum is a magnum in name only and fails to reach 2600 fps with most practical bullet weights as does the new line of Ruger Compact Magnums despite the marketing. Manufacturers furthered the confusion by slapping belts on nearly every cartridge in the 60's and then making cartridges in the 2000s that had no belts but exceeded the belted cartridges level of performance.

Since I don't subscribe to paper theory I'll have to compare the two cartridges I have the most on game performance comparison with- the .30-06/.308 and the .300 WSM/ .300WM. I used the .30/06 and .308 nearly 20 years and if there's a difference in the field I can't determine it. I've also used the .300WSM and .300 Win Mag quite a lot and balistically there isn't a nickel's worth of difference between them either. I won't talk numbers of creatures killed since that generally devolves into a discussion that borders on the vulgar, but I've shot a fair number of representative animals with each to feel comfortable that my impressions are solid while that number isn't near what one might expect of a Craig Boddington it is certainly on the high side for the average recreational hunter today. When you add in the number of animals I've witnessed shot with the respective cartridges I become quite convinced that the data pool is big enough to encompass a few anomalies as well as anticipated results.

While I certainly don't support the idea that the standard cartridges are insufficient for most big game I do think the magnum class of cartridges (at least in the .30calibers) is an all around more effective tool for the hunter- particularly the Western or Alaskan hunter hunting large game over wide open or mountainous terrain.  In the East, at least in my experience, the magnum class of cartridges is completely over the top except in very specific circumstances. I know that piles of big critters have been killed with the '06 and I've put many of them in that pile myself but if the dear reader will bear with me I'll explain my thought process.

Over wide open and mountainous terrain the ranging abilities of even great hunters are suspect and with a .300 class rifle you simply have to put the animal in the cross hairs and shoot. Many high speed thirties are suitable for a 250 or even 300 yard zero allowing a dead on hold from the muzzle out to the limits of ethical shooting. While it may seem a trifling detail- nearly every miss I've seen in the field occurred when the hunter was attempting to "help" the trajectory and aiming high resulting in shooting over the animals back. Just a few weeks ago I helped a less experienced hunter harvest a caribou at longish range with a .300 Ultra. I've passed on shots just like that with my .308 simply because I wasn't comfortable guesstimating the bullet drop. With the fast thirty it was a simple matter of holding the crosshairs steady and practicing good shooting technique.

Another thing I've observed, and the reader will have to excuse the lack of concrete evidence, is that a fast thirty given similar shot placement almost always seems to kill the target animal quicker than a standard cartridge. I don't know why. My habit has been the broadside, behind-the-shoulder-lung shot for many years and with the .308 and '06 I've been used to uniformly dead animals. But, they generally didn't tip over in their tracks and sometimes a little bit of judicious tracking was involved. While tracking isn't the end of the world it isn't the ideal situation either. With the magnum class of cartridges, nothing I've shot moved more than three or four yards from the point of impact with the majority falling where they stood. I've heard many theories as to the mechanism of injury that causes this and I must admit they all sound suspect; but there is no arguing that the amount of shooting I've now done with the .30 magnums resulted in uniformly fast kills with little to no tracking involved. In my book that's a very good thing.

That kind of performance doesn't come without a downside, some of it mitigatible and some not. The first serious downside to using that kind of velocity is meat damage. I am foremost and always a table hunter, so meat damage is something I'm exceedingly conscious of. With a magnum class rifle you need to do a couple of things to minimize meat damage- the first is shot placement. I know that I've often heard the dictum preached that you should shoot the point of the shoulder. The thought being that once the shoulder is significantly damaged it makes the escape of the quarry unlikely. I don't know about that, since I've seen several three legged deer harvested that managed just fine but I do know that high speed bullets smashing through shoulder bones destroys a lot of meat. As a consideration, the hunter should aim behind the shoulder and strive for a lung shot that avoids the thicker bones and muscle tissue of the shoulders much the way a bowhunter would.

The other consideration to reduce meat damage is for the hunter to use a tougher bullet. The fantastic .300 Weatherby built its reputation using much too soft cup and core bullets that on a behind the shoulder lung shot detonated like hand grenades and dropped game like Thor's hammer. Those same soft bullets would also fragment on shoulder shots, destroy a fair amount of edible meat and occasionally fail to penetrate the chest cavity. Most of the early criticism of the Weatherby cartridges centered on meat damage complaints. It's no surprise that Weatherby was the first company to commercially load ammunition with the Nosler Partition bullet- the first "controlled expansion" bullet that would withstand the high speed impacts common with all magnum cartridges.

With good shot placement and a modern bullet designed for higher impact velocity the amount of meat damage can be greatly reduced. On both caribou this year I didn't lose a significant amount of meat while a companion shot one with a .300 Winchester Magnum, hitting both shoulders and he lost several pounds of edible meat in the process. Identical quarry, identical ballistics and nearly identical range but vastly different outcomes. Shot placement and bullet construction matters.

The other downside to the magnum class cartridges is sheer recoil. While I think that the primary effects of recoil are felt between the ears rather than the shoulder there is no denying that some individuals find recoil at even moderate levels distracting enough to preclude good shooting. There are a few things you can do to mitigate recoil effects- first is to wear good hearing protection on the range. Most shooters find muzzle blast more disturbing than actual recoil so minimize that as much as possible. In that vein, do not muzzle brake your rifle. Muzzle brakes increase the amount of the muzzle blast directed back toward the shooter and can be more disturbing than recoil itself. A shot without hearing protection can be disastrous to the ears almost without fail.

Another item to reduce felt recoil is to make sure the stock fits properly and avoid those endless hours of shooting from a bench where felt recoil is perhaps its worst. Almost anyone with a well fit stock can handle surprisingly large cartridges from a good field position. There certainly is a learning curve to shooting magnums and I advise anyone getting one for the first time to practice often but keep the number of shots per range session fairly low. Even as an experienced shooter I find myself anticipating recoil after a while (see flinching!) and I know its time to transition to lighter rifles or call it a day.

If a shooter simply finds they can't handle the recoil of a magnum class cartridge then the only sensible course of action is to sell it off and get something more tolerable. But, with a little judicious range work and perhaps a bit of instruction almost anybody can develop the ability to shoot the magnum class of cartridges (particularly the lesser ones, ie. 257 Weatherby, 270WSM, 7mm Remington Magnum, etc.) quite effectively in the field. For those hunters willing to put in the work to master them, it is an investment that will return tremendous dividends in open country shooting.
Posted by hodgeman at 6:27 PM