The Zen of Wingshooting...Hits and Misses. 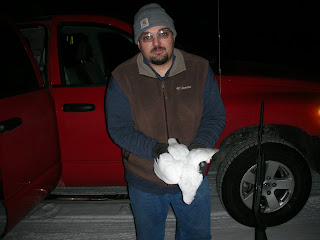 After posting about my new Benelli shotgun I bought myself for my birthday last year, I had meant to post several times about learning to wing shoot. That's about where I left it. After a summer filled with work, training for a sheep hunt, hunting caribou, reviewing a couple of books and sundry other activities, I totally abandoned my efforts at learning to hit flying things. I did make a promise to myself to abandon the apparently slovenly practice of killing game birds with a .22, despite how efficient and clean it is, and instead propel my shooting to a higher plane and kill them on the wing. That frankly didn't go so good at first.

The first game bird I took this year was a large spruce grouse who made the error of hanging out in my front yard. My son spotted him while out playing with the dog and after an attempt to brain the rooster "cave man style" with a large rock he burst through the front door looking for a better weapon. Initially, I shooed him from such an endeavor but after a couple of insistent passes through the garage looking for his bow and BB gun I decided to take it to get in a little fresh game meat for my visiting extended family. While the shotgun resided in the safe quite capably, I never even so much as thought about using it until the grouse was leftovers after having fallen to a single .22LR "CB Cap" through his head out of my son's rifle. Efficient and clean harvest? Check. Elevating my wingshooting? Fail.

The second bird came after a lengthy dry spell because generally during big game hunts I won't take the time to kill small game for noise concerns unless I really want camp meat. During my moose hunts this year I saw dozens of grouse and regrettably no legal moose. After a long and very disappointing day searching an area I mistakenly believed a hotbed of moose activity, I did see a prize of a bird- a beautiful ruffed grouse. Ruffed grouse are wonderful eating, quite a bit better than spruce hens or ptarmigan, but somewhat hard to find in my location. Typically whenever I see one of these I'll make the effort to bag it but a problem presented itself. Since I was on a moose hunt without expecting to shoot birds, I was armed with only a high powered rifle. What to do? Something that my hunting companion didn't believe I'd do... I leveled down on that grouse with my .300 and aimed very carefully. A body shot at thirty yards would leave nothing but bloody paste and feathers but accounting for the distance between scope and bore and the short range zero I was able to pull off a bit of fancy shooting and literally pop the grouse's head off while leaving the edible bits untouched. Points scored for making do with a bit of short range sniping for a tasty delicacy? Check. Abandoning slovenly practices of ground sluicing winged creatures? Epic Fail.

My third attempt came during a caribou hunt that I was endeavoring with my neighbor and new hunting partner. I was already tagged out on caribou so I packed along the new Benelli with a mixture of ammunition- low brass number 6s for ptarmigan, 3" 00 Buckshot for bear defense, and 3" "Dead Coyote" T shot for roving predators. After a long and fruitless day looking for the herd that had already left the area, I noticed a covey of ptarmigan about a 1/4 mile distance. With only about twenty minutes of shooting light left I baled out of the truck and stuffed my vest pocket with shells and then loaded the magazine. Taking a heading through the snowy tundra and low brush I set off in pursuit of proper wingshooting.

Hearing the covey's roosting calls I quickly zeroed in on one visible at the edge of a band of low brush. Readying the gun, I crept up on the bird. Just when I thought I would have to chuck a rock to get the bird to flush, he ran backwards into the brush and out of sight. Frustratingly, I realized I would have simply shot him with  a .22 ten yards ago and would now be picking up the dead bird. Undaunted I crept up to the edge of the brush and then all hell broke loose.

Fully a dozen of the white birds exploded within five yards and took skyward. Startled, I tried to pick out a single bird and fired a haphazard shot- BOOM!- that didn't hit a thing followed by- BOOM!- another miss. I swung over to one rising up to my left and pulled the trigger- BOOM!- and saw the bird dive for the brush trailing feathers. Getting my wits about me finally I swung over on one flying straightaway slightly to my right and took a clean bead- BOOM!- and the bird crumpled mid flight amid a cloud of white downy feathers.

I reloaded, somewhat amused that in just a couple seconds I had emptied the autoloader's magazine, and went into the brush to retrieve the two I saw fall. The first I found rather quickly and I hadn't found the second one when I was joined by my hunting partner. "Go on and get some more...I'll find the second one." exclaimed my partner, apparently thrilled that we finally shot something after a long day of seeing nothing.

I climbed a small rise, convinced the birds wouldn't go far, and was quickly rewarded with hearing the cackles of the alarmed birds. The fact the birds were nervous didn't bother me- in fact, upon reflection I'm sure the birds started flushing earlier giving me more reaction time to swing the barrel. On the rise a couple flushed at about 7 yards, I picked the right and- BOOM!- the bird folded and gravity brought him to earth in a beautiful sailing arc amid a cloud of feathers. I swung left and- BOOM! BOOM!- two clean misses on the fast moving streak of white. I stuck my hand in my pocket for more shells and found nothing there but lint. Looking in the magazine I saw the follower. I retracted the bolt slightly and saw a shell stuck under the extractor- one shot left. Crap, where did all the shells go?

I retrieved the bird and made my way back to my partner still searching for the second bird of the first flush. He still hadn't found a thing. I noticed from my vantage point a bird about 5 yards to his left- on the ground and moving in a crippled wobble. I called out and had him maneuver well out of the line of fire. Fearing the bird would simply run on the ground into the brush or flush and I'd miss with my only shell I raised the gun and fired- BOOM!- and finished him. We collected the remaining bird for a total of three and headed back for the truck. It was getting pretty dim with the sun below the horizon as we crunched our way over the snow, arriving there we started cleaning the birds. Within moments the covey landed within a hundred yards of our location and started their cooing, roosting cries.

"Heck! Go get some more if they want to be dinner that bad. I'll take care of these.", cried my partner. I stuffed more shells in my pocket and the magazine tube of the gun and set off. I quickly flushed a fast moving bird quite far out- BOOM!BOOM!BOOM!- and missed every time. I had to get better at this kind of shooting and judge what kind of lead was required at what distance- wondering bewilderedly what sort of Euclidean geometry and vector calculation would get me on the birds. I reloaded and continued with just enough light left for a couple more moments. I flushed a rather large hen out of the brush about 5 yards out and she appeared to hover there slow motion for a few moments in midair, twisting and turning, trying to determine which direction to take flight. She turned on the wing and headed straight away gaining momentum as the butt of the gun hit my shoulder. The bird seemed to by flying in slow motion but I seemed to be moving at faster than normal speed.

There in a brief moment, frozen in time, I finally got it. The entire wingshooting zen I had read about for years caught up with me full force as the entire moment felt right. Not calculated, not aimed, not consciously and deliberately fired. The gun, the trigger, the bird, the eye- all in alignment of their own accord. I don't remember the shot or the recoil; all I remember is seeing the bird fold in mid air and hearing the "ka-Chunk" of the action as the smoking hull was ejected and then seeing the bird hurtling to the ground streaming downy feathers with the golden, orange sunset on the white mountains beyond. It was all those things that wingshooting writers endeavor to describe in flowery language and fall (myself included) woefully short.

Firing without conscious thought at a target that presented itself unexpectedly- quite the opposite of rifle shooting. I am quite accustomed to taking deliberate shots at distance with the rifle and this whole process seemed rather haphazard. Roaming over the country, blasting haphazardly- that is until that moment when everything lined up. Not to delve too far into the sound of "one hand clapping" but the experience of instinctive shooting was rather new to me. Feeling slightly overwhelmed, I searched the brush for the downed bird and after looking for it just a moment I realized it was really too dark to continue. I finally retrieved the bird and made my way back to the truck- a very happy...wingshooter.
Posted by hodgeman at 10:10 PM

I'm SO far from that zen moment LOL

Congrats and welcome to the brotherhood!! There is nothing quite like wing shooting!!

How did you prepare them, and the taste?

@Dustin...each bird has a unique flavor with ruffed having the lightest meat and mildest flavor and spruce the strongest.

Right now I've been asked to review a "hunting cookbook" and I prepared them with a recipe from it. Due to advance copy agreements I can 't publish it until the book is released for sale- look for an article about the book in mid December with the recipe and cooking of these birds (with photos).

Just one bird can make a day of wing shooting good. Wing shooting is my favorite kind of hunting by far and away.