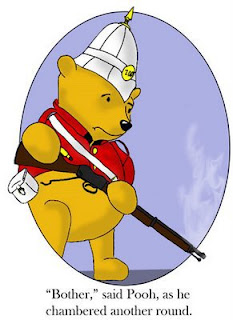 That most anticipated day of the year is rapidly approaching....the opening day of hunting season. I've been sorting my equipment and packing for the first trip, sharpening my knives and one very important part of that preseason ritual is zeroing the rifle. I use and practice with my rifles all year so one would think that I could just get along fine with skipping the preseason sight-in.

And you'd be dead wrong.

Since I do use (and abuse) my rifles all during the year, the chances something could get knocked out of line, a barrel crown nicked or some other rifle borne malady are much higher than if I were the once a year sportsman whose rifle mostly lives in a closet outside of the annual hunting trip. Not to excuse those folks either- they need all the practice with their rifles they can get.

So in preparation I took the rifle out to the range, rolled out an old canvas sleeping bag, placed a daypack at the head, assumed a very nice supported prone position and placed the crosshairs on the target located 150 yards downrange. I took up slack on the familiar Timney trigger in my rifle.

I quickly cycled the bolt, resumed the position and calmly fired again.

I snapped the bolt open and let the butt rest on the ground while I got up and peered downrange through the spotter. I was surprised to see two holes, gratifyingly close together considering the distance but, with some disappointment, 2" low and a full 6" to the left of my point of aim. Looking dumbfounded I realized immediately what had happened. I had been developing loads this spring for some 150 grain bullets and had zeroed the rifle to those loads this spring while snow still lay on the ground and had promptly forgotten about it by the time it melted.

Would such an errant shot have caused a missed animal? Maybe and maybe not. Close enough counts but that six inches too far aft on an animal could very well mean the difference between a clean kill and a long tracking job and the animal's attendant suffering. In a very bad case, it could mean a poorly hit and unrecovered animal that dies days later of infection.

No, my friends, if we are going to fire our weapons at living creatures we owe it to them to do so with maximum efficiency at arms. Too many of my fellow hunters will take to the field this year with rifles they've not zeroed since the last Presidential election, or carry ammunition that's not the load the rifle was previously zeroed with. Some of those hunters will get their game and some won't.

Given that I moved my zero a full seven inches at 150 yards by simply switching from 150 grain bullets  at 3300fps to 180gr bullets at 2950fps, I thought I would try an experiment.

I took two varieties of factory ammunition- both loaded with Nosler's excellent 180gr Accubond bullet. The first load was my preferred hunting cartridge- a Nosler Trophy Grade .300WSM 180gr at a listed velocity of 2950 fps. The second was Winchester Accubond CTs loaded with the same 180gr Nosler bullet at a (an optimistically) published 3050 fps. One would think that two loads, so similar in construction would shoot so darn near the same point of aim at 150 yards that they'd be indistinguishable...and you'd be wrong. Three shots of each yielded two very distinct groups- each about 1.5" in diameter but separated 8" diagonally across the target. Could that account for a wounded animal? Certainly.

I also took two different lots of 30-30 ammunition- same manufacturer, same variety but manufactured years apart in different lots. I fired two, three round strings at 100 yds. and despite the old rifle's crude sighting equipment saw two distinct groupings four inches apart on the target. One would think that after one hundred plus years that all varieties of 30-30 ammunition would be exactly the same...and again, you'd be wrong.

So, in conclusion, as you prepare for this year's hunt; don't neglect your smoke pole and go afield with ammunition that hasn't been specifically zeroed for your rifle. At most common hunting ranges it may make little difference but as we've seen here it just might and the animals deserve the due diligence of making sure your iron is shooting straight.

Here are a few brief suggestions-

1. Sight in with the same load from the same lot you intend to hunt with. If you change your load mid-season, then re-zero the rifle. It may seem like nit picking, but so is prowling the toolies at "0-dark hundred" looking for any faint sign of a wounded critter.

2. Sight in at the range you intend to hunt at or longer. The "administrative" zero at 25 or 50 yards will do little to confirm your point of impact at longer range. Try if at all possible to shoot at a variety of ranges out to the maximum you intend to shoot. What you may find may surprise you- a straight vertical string that corresponds to the drop table on the cartridge box is seldom what you find.

4. Sight in from a full magazine if using a repeater. Not only can a full magazine change the point of impact on some rifles, it is also a good time to check to see if the rifle will feed from the magazine or if the latch will hold up under recoil. I've had both failures happen and your cartridges going "bombs away" when you pull the trigger is both embarrassing and ineffective!  I also heard recently of a hunter arriving in Alaska on an expensive Brown Bear hunt with a brand new rifle that failed to cycle cartridges from the magazine. His guide gave him and his equipment a "No go" for dangerous game. Bad show!

Good hunting to you!
Hodgeman
Posted by hodgeman at 11:05 PM

Loved your articles! Like another posters of yours said, you don't have outdoor trips, you have outdoor adventures! Well at least compared to how 98% of humanity is living....

One question, do you use your well-worn .30-30 to hunt at all up there in the Great North Land? I'd imagine that given its fairly high trajectory and lack of scope, plus the fact that you mostly hunt in tundra environment (at least for bou'), it serves mostly as a memento?

Thanks! Looking forward to reading your newest stuff!

John,
Thanks for dropping by! I must admit that as much as I love my old 30-30...it doesn't see much use anymore. My son carried it for his first season for purely sentimental reasons, but between my middle aged eyes and its looping trajectory- it stays home most of the time. I will likely take it to Tennessee on my next deer hunt there.

I manage to occasionally shoot a caribou well within range of the .30-30, but it's not something you can count on- you're more likely to shoot over 300yards than under 100yds.

Thanks for the kind reply Mike. I am curious that given the amount of long range shooting you do why you dont employ a laser rangefinder of some sort - they'd make a 350 yard shot with a .300 a slamdunk rather than something that is better wisely passed. Especially for an old rifle hand like you, at least on non windy days.