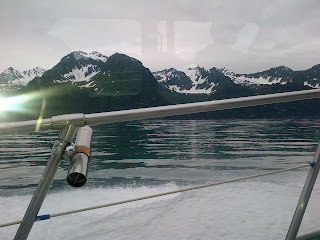 For our Independence Day weekend, my usual crew of hunting and fishing compadres and I decided to do something a little different for a change than our usual halibut excursion...we elected instead to travel to the south a far piece to the town of Seward and embark on a combo excursion. We all love halibut fishing and there's just no reason to mess up a good thing. Although we did....more on that later, but a combo charter combines a lot of different types of fishing into a single excursion. Halibut fishing, jigging for Ling Cod, targeting the rockfish species and -given the July time frame - mooching for Silver Salmon was a total possibility.

We spent the morning fishing for large halibut and no one had bothered to inform the halibut that they'd need to participate. So after several hours of fruitless fishing we looked like we'd pretty well get skunked. Several moves by the captain did little to improve our lot, other than burn up fishing time, and out of utter desperation he placed us at the 11th hour on top of what is colloquially know as a "chicken hole." For those of you unfamiliar with Alaska fishing lingo, a chicken hole is a spot on the underwater world inhabited by small halibut of the 10-20 pound range and generally lots of them. We limited at our two fish apiece in half an hour.  Not to sound ungrateful, but no one charters looking to catch fish that are nearly as available within rifle shot of the dock on any old ratty vessel you can scrounge. Heck, I've caught a chicken halibut in a kayak as well as from a dock in the Aleutians. Halibut fishing had burned all day and yielded us little of but a single species. 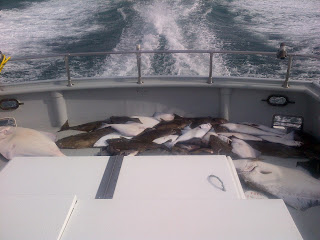 Turning the vessel toward home, the captain anchored us over some nondescript submarine terrain feature and the deck hand rigged our rods with smaller circle hooks baited with halibut skin. We dropped bait to the bottom and began pulling up some pretty excellent fish. In Alaska fishing lingo, we were catching Shinies and Stickies. Or, more properly, Pelagic and Non-Pelagic Rockfish. Pelagic Rockfish inhabit mid water (although we caught them on the bottom as well) and tend to be a huge variety of dark colored and aggressive fish, one of the most common is called a Black Bass although it's something of a misnomer since it has little in common with any true bass. Non- Pelagic species tend to be bottom dwellers who, like their dusky cousins, tend on the aggressive side but are more brightly colored hues of orange and yellows and pink or sport huge toxic spines that are lethal to their predators. One of the more prized specimens is the Yellow Eye or as it's known other places, the Red Snapper. These fish are all relatively similar despite their vastly different appearance, all inhabit similar terrain and give (unusual among fish) birth to live young. The average age of a mature specimen can run upwards of 75 years with some of the oldest examined specimens dating clear back to the Civil War. 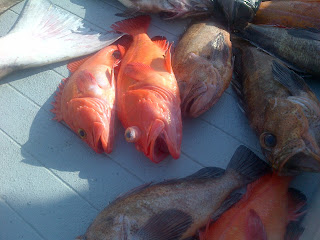 Like most good things in life, the action was intense but brief and after a half hour of non-stop fishing most of the boat had limited out on rockfish. The limit is but three (only two of which can be non-Pelagic) in this area due to rockfish's extremely slow growth, long life spans, and relatively high recreational fishing pressure. I could have forgone halibut altogether and spent the day catching and releasing these beautiful and dazzlingly varied fish, each new cry of "Fish ON" was an anticipation of which variety would come to surface. I really could have spent a day at it if but for a small hiccup....

They don't release well. Not well at all. 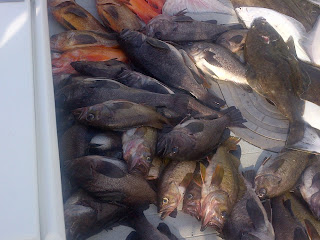 These fish are extremely adept at living long lives at depths over three hundred feet and most often the trip to the surface will cause rapid expansion of their swim bladders, stomachs and brain cavities and it's  nearly always fatal at anything deeper than about 50 feet. Anglers have tried various techniques over the years to release the gas pressure (fizzing) so these fish could survive release but most of them fail or leave a fish prone to infections or complications. Deep release devices intended to re-pressurize the fish are a step in the right direction but often fail miserably as well. For the conscientious angler these truly belong on your plate once you've given them a one way trip to the surface. And given their delicious taste and firm texture, there's no reason not to eat them with relish. And a deep swimming yellow eye that's caught on your halibut rig is good eating. Given their slow reproductive cycle and their tendency to be by-catch it's good to keep in mind some ways to minimize unintentional catches of these fish. Alaska Fish and Game produces a variety of literature with ways to limit by-catch of these fish. Check it out here. 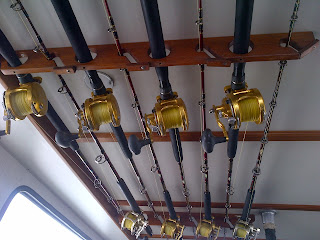 As a rare treat, we observed humpback whales feeding and playing about a mile away...a delectable end to a long day.

Thank you for such a great read. I'm stuck in a small room, sick with a cold, just time to read and sleep. I felt like I was there with you.