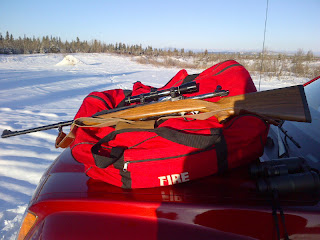 I've got to admit outright that I've never been a .270 fan. I loved reading O'Connor as a child and some of the earliest experiences I have with hunting and shooting literature were his last few years of columns in the magazines at the barbershop. Even though I loved his writing and hearing of great hunts with "his" .270, I've always gravitated to the .30 calibers. One reason- back then you could buy FMJ range ammo in the '06 and .308Winchester for considerably less than any sporting ammunition. Looking deep into my ammunition collection recently, I found some .308 ammo with a $5.00 sticker (those were the days!). .270 ammo hasn't been that cheap in my lifetime. So, the .270 has been well established for a long time, I've just never paid it much mind.

That's not to say the .270 isn't a very good hunting cartridge and hasn't developed a track record on game that's truly impressive. Even today- cartridges developed for mountain hunting frequently just replicate what the .270 has been doing since 1925. I won't go into all the numbers since they've been put out there for a long time by better writers than me, but a 130 gr bullet at 3150 fps makes for a powerful and flat shooting rifle on deer and sheep sized game. Lately the .270 has been "downgraded" to a 130 gr at 3050 but no matter, that's still flat shooting and more than enough medicine for even large deer. Early on, ammo makers developed a 150 gr bullet at 2850 which O'Connor saw little point in but others have used very effectively around the world.

Fast forward to middle age and another of O'Connor's developments crossed my path. I've heard it debated about how much O'Connor was directly involved in the design of the Ruger 77 but considering he was considered one of America's foremost authority figures on hunting rifles at the time it makes logical sense that Bill Ruger might have consulted with him on the subject. I had been a user of the Ruger 77s for some time and had always coveted the top of the line M77 "Express" Rifle. Bill Ruger was a well known "anglophile" when it came to interwar period guns and the "Express" came so equipped with features common from those British pattern sporting rifles- quarter ribs with folding leaves, barrel bands, and a first rate stock. I was in love. I only rarely saw one in a store and generally at a time when I had little money. Once I walked into my favorite gun haunt in Anchorage and saw a matched set- an '06 and a .375 in the "Magnum" version. The price tag was about what the car I was driving at the time was worth. Just about the time I could actually afford one, they dropped from the catalog. I chalked it up to opportunity lost.

One day a friend of mine came to me and asked if I'd be interested in purchasing an "Express" in great shape and barely fired. I was immediately interested and figured it was a rare chance at acquiring an object of desire from my youth. "Which cartridge?", I enthusiastically inquired, hoping for an '06.

I was slightly less enthused at that point, always considering the .270 something of an odd duck despite it's widespread use. I examined the rifle and it was flawless and I purchased it immediately. The serial number placed it as an extremely early Express with a pre-production number. I had some thought about rechambering it into a 338-06 or a 280 Ackley but I hesitated given how good of shape the rifle was actually in. Some further research into the .270 shows that many hunters have used the .270 on deer and sheep for sure but even bigger game like elk and moose and even grizzly have fallen to the cartridge. O'Connor used one on a lot of big game without reservation and even Alaskan hands like Russell Anabelle used it quite a lot. Modern bullets have done nothing but improve the cartridge. A brief trip to the range showed promise- the heavy rifle in the light cartridge resulted in extremely light recoil and despite the usual rough M77 trigger, the rifle showed surprising accuracy. The thought of hunting with it didn't seem too outlandish anymore. 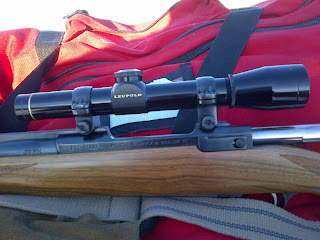 Something else crossed my radar as well. The retail firm of SWFA had recently commissioned Leupold to reproduce what I thought was one of the most useful scopes ever devised- the M8 3x. A long, straight tubed scope in fixed power- it allowed mounting on even magnum actions and the lack of an objective bell allows low rings on rifles with quarter ribs. It's pure aesthetics but a ponderously big scope sticking high off the action just ruins the lines of a rifle in my opinion and from a practical perspective often precludes good shooting because the firer can't get a good cheek weld. Thinking back to some of O'Connor's writings I remembered him being quite enamored (and possibly shaping my own early bias toward) with low magnification, fixed power scopes. In O'Connor's day it would have been a Weaver 330 in Stith mounts; in mine its a Leupold 3x in Ruger rings.


A Trader Keith webbed cotton sling my wife gave me as a gift several years ago was the cherry on top.

So after assembling the "retro" rifle the numbers come out something like this- an 85 year old cartridge, a 20 year old rifle made to look like a 100 year old one, and a new scope patterned after a 75 year old model all whole-heartedly endorsed by a man whose been dead for decades. The result is satisfying in appearance and early range results show promise in the field; so hopefully I'll have some new adventures to tell with this project. Aside from the relative weight of the end results, maybe old Jack really knew what he was talking about. Here the .270 is almost always seen with a can on the front to alleviate the drama the round is synonymous with. Lots of Ghillies and Keepers north of the border use them on Reds to great effect.