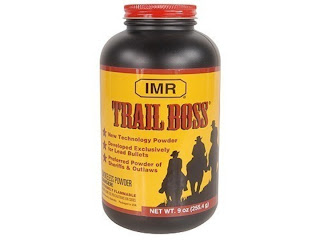 In my ever onward search for useful info, I stumbled onto a product called "Trail Boss" a few years ago. Originally manufactured to fuel the demand for black powder type loads in the fast growing sport of Cowboy Action Shooting, it excels at filling voluminous cases with it's doughnut shaped granules and makes a safe alternative to charging huge black powder cases with tiny charges of smokeless powder. For instance, in the huge .45 Colt case you could easily double, triple or even quadruple charge your round with smokeless powder- with the disastrous results you might anticipate.


I'm conspicuously absent of such uses being a magnum rifle enthusiast, but in an obscure corner of the makers website it lists a formula for making reduced rifle rounds in any centerfire rifle case. Basically, you figure out the volume of powder you can put in the case without compressing the load and voila'- that's your max load. For a starting load, simply multiply that max load by 0.70 (70% of max). I insist you read up on Hodgdon's site for more info, but it's as easy as that. A couple of years later, load data for many common cartridges appeared.

What use is that you may ask? I'll list several and many more exist- only limited by your imagination. In this interesting age, supplies of rifles and many common cartridges have been overwhelmed by market demand. While the supply chain issues will resolve themselves eventually, it doesn't help the hunter needing something done in the current season. While a smaller rifle can often be pressed into service in the role of a larger one, pressing a large one into service of a small one is often disastrous. Here are some examples that I use reduced loads for.

1. Introducing newcomers to shooting sports. Limiting beginners to nominal recoil levels is a great idea and a role often filled by the ubiquitous .22LR. But what to do when the beginner is ready to progress beyond the rimfire but not yet ready for full bore magnum rifles? There are many options available such as the .223, .243 and .250- but in these days you may not have access to a smaller rifle or even with something like a .223, finding ammunition isn't the easiest task. The solution is easy- turn your magnum bruiser into a soft shooting centerfire with a reduced load. A nominal .300WSM cartridge firing a 180gr bullet at 2950 feet per second can pack a vicious wallop. My Trail Boss load fires a 150gr. at about 1700 feet per second and is practically recoilless yet gives the feel and report of a true centerfire rifle. Trail Boss isn't the cheapest powder, but it's certainly cheaper than any factory reduced load or smaller bore rifle ammo these days.

2. Fur bearers. This is a perfect example of a larger rifle not filling the role of a smaller one satisfactorily. For those of us who harvest fur bearing critters- destroying a pelt defeats the purpose altogether. I shot one of my first fur bearing animals with a .308 Winchester with full throttle 150 grain ammunition. The result was nearly a disaster- it was a perfect facing shot and the fox literally split up the seam and the hide was entirely salvageable, A broadside would have destroyed it completely. My Trail Boss loads replicate the old British "Rook Rounds" like the .300 Rook and .310 Cadet almost perfectly and they were used for fox shooting in merry old England with perfect satisfaction for decades. Calling generally yields shots under 150 yards and pelt damage with these low velocity rounds is negligible and the trajectory is sufficiently flat for lynx and fox. In fact, I've come to believe these are superior to the high velocity centerfires like the .223 and .22-250 for harvesting fur within the limits of it's trajectory due to the limited pelt damage.

3. Emergency Rounds/ Filling the Pot. Much has been written about the utility of a "survival gun" or "camp gun" used to take small game in hunting camp or in an emergency. Creatures like grouse, squirrel and hares are a welcome respite from freeze dried meals and other convenient camp foods that are long on ease and short on taste. Flooding last year strained many hunters supplies when rising rivers  stranded them on the wrong side of civilization. It's often been suggested the hunter should carry a .22 pistol or revolver, a small rifle and even Jack O'Connor frequently packed Model 42 shotgun in .410 for such work. But I am most frequently hunting on foot with camp on my back, carrying an extra gun (even a light revolver) is not on my list of preferred equipment. I carry enough crap already. Several companies made chamber adapters to fire pistol cartridges from rifle chambers but accuracy and function were pretty sketchy. Solution- a handful of reduced loads in the pack, sighted for the top of the bottom thick wire allows shooting a grouse or hare with ease should you find some begging to be dinner without burdening you. It's also very useful should you need a "finisher" on "down but not out" game and want to avoid further meat damage.

These are just a few examples of how one could use reduced cartridges to press a high powered rifle into the role of a smaller one. Remember, for safety's sake to NEVER just reduce powder charges below minimums- the result could be catastrophic. Use a powder that allows safe case fill and gives velocities that are in the range that will not destroy the small game and fur bearers. I love the big boomers- but they are sometimes too much of a good thing.
Posted by hodgeman at 11:39 PM