I must confess that I slept like a baby in the hold of that boat. The dim interior, the sound of light rain on the deck above, and the gentle rocking of the ocean combined into a force that would put modern sleep aids to shame. I was jarred into consciousness by the staticy crackle of the NOAA weather radio giving the forecast for the morning. I lay there quietly listening to the disembodied, computerized voice recite the wind speed, precipitation and wave height for location after location around the Prince William Sound. From the forecast it was apparent that the wary angler would go light on breakfast.

I rolled out of the rack and headed above decks to see what the day was looking like. The skipper and the deckhand were moving efficiently about- clearing bedding and reassembling the interior of the boat.  Remembering the forecast, I powered down a cereal bar and hoped I might get a cup of coffee when the engines fired and we could run the microwave. A couple of the "rear deck crew" must have had a rough evening as they were still asleep when we got underway. The skipper was in hurry to get going- the engines were barely started and the anchor chain was coming up. Within minutes we were running flat out across the 5 foot swells, headed for the fishing grounds.

I guess that coffee would have to wait.

We anchored off of some non-descript point of land and made some effort to maneuver to a specific point on the GPS readout. The swells made it difficult to hold position while the anchor chain unspooled the 300' to the black bottom. Even with the skipper's practiced hand we had to make several attempts before the anchor secured us in the right spot. Despite the pitching of the deck, Deck Chick made her way with practiced efficiency and had us all rigged for fishing in just moments. The skipper disappeared below and we started to fish.

It always is a long wait for the first fish of the day to hit- sometimes it happens fast and sometimes it doesn't happen at all but the tedium to see which it will be is something that's both delectable and detestable at the same time. It took 35 minutes by my watch and The Boss had one on the line. It was a long haul up from the bottom and we had a nice halibut on the deck. Not repeating yesterday's indecision, he said "Keep it" before Deck Chick had the fish completely subdued. It would go on like this all morning. Slower fishing overall, but the fish were larger and we kept a higher percentage of those we put on deck.

Safety Man climbed above deck and began to fish by mid-morning and due to the pitching of the sea was chumming at the rail in minutes. Whatever mysterious Jaegermeister and Red Bull combination he spewed into the water must have been miraculously attractive to the fish. He was still green around the gills when Environmental Man's reel started screaming. He did the usual thing that all fishermen do when confronted by a running drag- he tried to stop the fish's advance and turn it. No such luck- the stiff deep sea rod bent precariously and the drag never slowed.

D.C. was at his side in a flash- it was obvious to her experienced eye that this was a really nice fish and she did her duty and had everyone reel up to allow room to fight the big halibut. After the fish stopped running it was E.M.'s turn to reel the fish in from the depths- foot by foot. It took a very long time and we tried various techniques to ease the strain- a fighting belt, a butt cup (attached to the rod butt, not E.M.'s) and good old fashioned padding kept the rod from digging into his abdomen and thigh. I've had huge bruises from fighting large fish and he would definitely have one when this was over.

D.C. yelled for the skipper to get up. Despite her remarkable ability the laws of physics still applied- she would not be able to control the leader, load a bang stick and then flip the fish that likely exceed her own body weight over the rail. He appeared in the cabin door right away and upon seeing the rod and the strain on both E.M. and D.C.'s face knew we had a really good one. He reached back without looking and retrieved the bang stick from it's place starboard of the cabin door. Skipper took over coaching duties and D.C. retrieved the harpoon and gaff and handed them out. We must have looked like Frankenstein's mob on the back of a boat- a motley crew of shouting and struggling peasants each holding and waving some deadly implement in the air over our heads. 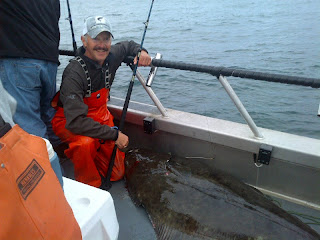 With a splash the fish broke surface beside the boat. Without asking the obvious question of whether we'd keep the fish or not, Skipper deftly dropped the power head of the bang stick on the halibut's skull right behind the dual eyes. With a muffled pop that sounded like a cardboard box dropped on a concrete floor, the fish suddenly went limp in the water. The skipper exchanged the bang stick for the harpoon and despite the razor sharp point failed to fully penetrate the fish's body. This worried him somewhat as losing a fish of this size would certainly cost him reputation (and tips!). The gaff was inserted under the jaw and with a large effort- two on the gaff and two on the harpoon line- heaved the fish through the diver door on the rear of the boat. By some luck, the harpoon head turned under a gill plate and held fast- in fact, we'd have to cut it out later with a knife.

No sooner had the fish slid onto the deck than the circle hook just simply fell out of it's own accord.

We all gasped like we'd seen a miracle. With the slightest twist or even the smallest amount of slack line  we'd all have screamed as this huge fish slipped back into blackness. This same crew had boated a 160 pounder two years ago, but this one was bigger. The skipper was really excited as he looked at a potential derby winner, without fail a top three and said to E.M. rather proudly, "Bet you're glad you got that Derby Ticket now!"

The look on E.M.'s exhausted countenance was priceless. Unforgettable in fact. He'd not been able to find the Derby Ticket vendor....and had gotten a coffee instead. The whole Derby affair was marketed around just such an occurrence. 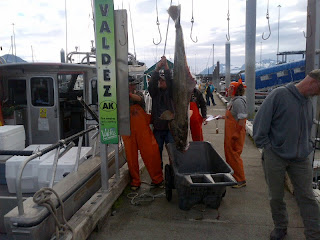 But he had. E.M. had a giant fish on deck and no ticket. The fact that he'd not win any of the purse placed a down trodden mood on the party the rest of the day. Except for the jabs at E.M. over the derby ticket, we were pretty much too tired to talk. We caught and boated several more fish in the afternoon and the seas got rougher and the swells got higher. I believe that by lunch I would have been happy to just turn for home- still a 4 hour boat ride and a 6 hour drive from my location in the Sound.  I was exhausted and we had meat in the hold.

We finished the trip in anticlimax; exhaustion, seasickness and just plain hunger. We boated our limit just five minutes before the cut off and satisfied that we were well and truly fished out, the skipper pulled the anchor and we headed for port. I managed a few minutes sleep since the following sea was a much gentler ride and within an hour we were in protected waters and the sea shone like glass. I woke briefly to see a pod of killer whales breach- a perfect end to the trip.

The day ended in a long series of chores. Cleaning up the boat and packing our gear, offloading our fish and turning them over to the fillet guy who manned the table at the slip, then arranging the fillets to be transported to the processor by a small army of young kids armed with plastic bags and wheeled carts. The final tally on the monster fish was 198 pounds, bled dry. Probably well over 220 if we hadn't slit the gill. Our check in at the processor was over 500 pounds. Some gross math would estimate our pre-filet weight at something like 850 pounds before the inedible parts of carcasses were fed to the waiting crowds of gulls, eagles and harbor seals.

It was late when we managed to grab a burger and some gas- filling our bellies and our tanks and turned the rigs toward home for the long drive back. A industrial sized cup of hot coffee was like manna from heaven when the truck topped Thompson Pass at dusk. 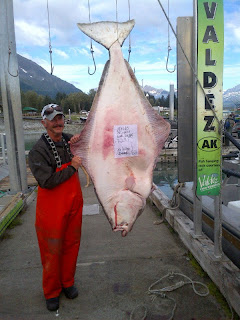 At last look, the fish placed number three in the standings (had E.M. had a ticket) and would have been a $15,000 fish.

But it eats well just the same and the weekend was only half over.