The week started out as any other, the usual workday drudgery but the promise of an adventure awaited  at the end of the week. My annual halibut fishing trip had been delayed until the first of August due to the change in plans my frequent fishing companions had cooked up in the spring. Rather than the usual one day charter where we would leave Valdez and return that evening (whether we had fish or not)- we would charter for two days and camp shipboard overnight. We would, of course, be entitled to two daily limits and fore go the long treks from Valdez to the better fishing grounds. Over the last few years the halibut stocks have been declining so charter operators are having to go further from port to get into good halibut numbers and it's not unusual to start and finish your fishing trip with a three to four hour boat ride....it makes for a long day and with marine diesel soaring well past $4.00 a gallon, an expensive day of fishing as well.

The two day charter seemed like a wonderful idea. More time fishing, less time boating, slightly less cost per day due to the fuel savings. More skippers are offering the option these days as many clients are unwilling to spend the kind of money a day charter now costs for a single limit of halibut when combined with half the day spent under power. Not too long ago most skippers would never consider overnights- too inconvenient. It's now relatively common.

Our adventure would prove to be the usual late summer affair. With hunting season opening simultaneously we wanted to waste no time. Usually I fish in June and July, when hunting is mostly closed, and then transition to acquiring red meat when the season opens in August. We departed town at 10:30p destined for Valdez and after a long and bumpy ride down the highway and some pea soup fog crossing Thompson Pass we arrived uneventfully in Valdez at 4:00a. We found the dock easily enough and managed a couple of hours worth of nap in the truck while we waited for the 6:00a boarding time.

At the crack of dawn our companions had all assembled at the dock and ready to board. The skipper asked if we all had Derby Tickets (the usual seasonal 'biggest fish' contest) and everyone did- with one exception- our friend Environment Man. He was given the opportunity to run up the dock and purchase one, but declined. Hindsight being 20/20 and all- this was a monumental mistake. We were all a little taken aback when the skipper's deckhand made an appearance and began to stow our gear. I've encountered all sorts of folks working as deckhands... the down and out, the college guys needing room, board and the opportunity to make some bank before school started in the fall, even a couple of retirees (pensioners for SBW) for whom the tedium of inactivity had gotten to be too much. Deckhanding is hard dang work- hauling large fish over the rail, baiting hooks, untangling lines for an endless stream of customers. I was very surprised to find the deckhand was the skipper's 17 year old grand-daughter. I really didn't know what to make of that- particularly around the (usually) "salty" crew  that I fish with. I hoped that The Boss's significant other- Quality Woman- being on board for this trip would keep the commentary at least PG rated. Otherwise, I mentally prepared to bait my own hook and flip my own fish over the rail. Maybe I'm just old fashioned that way.

The trip out was uneventful and several hours of pounding across the chop brought us to the non-descript location and after a little bit of GPS hokey-pokey and messing with the anchor- we were ready to fish. Deck Chick broke out the rods and soon had everyone with bait in the water. It was apparent from the efficiency she handled the task that she was no beginner at this and the way she barked orders at my crew of sportsmen ( and woman) that she could likely hold her own verbally. After a few minutes of fishing, The Boss, had a bonafide tug on the line and after a long struggle to pull the fish from the 300' depths had a nice 50 pound halibut beside the boat. Deck Chick was right there and she deftly pushed TB to the side with a cursory "I got this", leaned over the rail and wrapped a hand around the steel leader and tugged the fish over the rail in a deft motion. As soon the flopping flatfish hit the deck, she body tackled it and pinned it to the deck. She look politely at TB and queried," Keep it or toss it?"

Now one doesn't generally like to keep the first fish on board, otherwise limiting very early is a possibility and you'll be watching your companions fish from the cabin. You also don't casually toss what might be the nicest fish of the day overboard- no matter when you land it. I could see TB swirling those thoughts within his analytical brain.

That stunned TB to make a decision, he uttered, "Keep" in a slightly shocked voice while the rest of us stared open mouthed. DC deftly fisted the circle hook  out of the fish's mouth and knifed it savagely in the gill (where'd the heck that knife come from?) and cramming a forearm up the fish's gill plate slid the bleeding fish expertly across the deck into the fish hold. She had TB's hook re-baited and back in the water in less than 60 seconds. 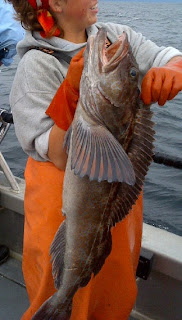 After that, the fish occupied our thoughts. The fishing was pretty much non-stop. It was mostly chickens (halibut less than 20 pounds) and we returned anything less than 40 pounds to the water. The skipper, being a real pro at this, didn't waste a lot of time moving the boat and other such amateurish non-sense. He put us on a good deep hole, left the work up to DC and promptly went below and fell asleep. We reeled up more than 50 halibut that first day and had limited out sometime before 9p with a dozen very nice sized halibut (albeit nothing huge) in the 40-80 pound range and a half dozen Ling Cod. The Ling is a Leviathan looking beast with a huge, wide, huge and a gaping maw filled with reverse pointing, needle sharp teeth. They clamp on to their prey and basically crush it to death and then swallow it whole. It seems impossible that the fish could eat something large enough to require a mouth that big and get it to fit through their small body. My four foot specimen could have fit a regulation football into it's mouth and it had the appearance of being 1/3 head but it's body was only the size of a XXL red salmon. The minimum legal limit is 36" in length for a keeper and we boated nine of the prehistoric looking beasts- three being slightly undersized and returned to the deep. Despite their vicious look- they have a very good taste and are something of a rare treat. It was the first one I'd caught since 2002.

By nine'o clock the seas had gotten rough. Not so bad that the vessel had to retreat to a cove but rough enough to make you wish it would. One of our companions, Safety Man, was struck with a raging bout of sea-sickness and spent considerable time "chumming" everything in his gastric tract for the entertainment of the rest of the crew. An ungrateful lot we are. We had boated a nice limit of limit that the skipper and DC would fillet and put on ice to preserve the catch until we docked the next day. I was pretty well exhausted. TB and myself had fished the whole day and had boated the majority of the fish- everyone else had fished in starts and fits between snacks, naps, and retching. I was exhausted from a long night on the road and long day on the water and by the time we anchored in the cove all I wanted to do was power down a freeze dried meal and go to bed. 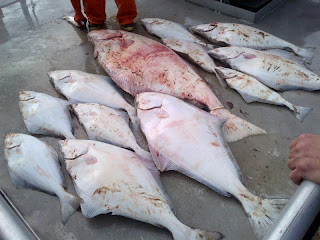 A word on boat camping. Unless a boat charter specifically sets up for campers there just isn't a lot of room for amenities. Given the size of our group, eight including the skipper and DC, we  pretty much filled up the boat and the skipper had discouraged us from bringing a lot of extra gear or food. "Keep it basic," he'd said, "we're there to fish, not cook." Dinner was a basic affair of freeze dried backpacker chow washed down with lukewarm instant coffee made in the ship's microwave. Sleeping arrangements were even more Spartan. Enough flat space to stick everyone and that was about it.

I was exhausted and sore from a long day of reeling heavy fish off the bottom in rough seas. TB and his girlfriend, QW had taken the double bunk and were already turning in. The skipper and DC were just finishing filleting chores and would soon turn in. EM was looking pretty ragged and our friends Maintenance Man and Safety Man (despite spending much of the day vomiting) had produced a bottle of Jaegermeister and several cans of Red Bull and planned a cocktail party on deck while throwing pixies for silver salmon that were jumping all over the cove. I had no desire to partake of such shenanigans and headed to belowdecks where I wrapped up in a well used sleeping bag  and soon fell fast asleep to the gentle rising and falling of the ocean. 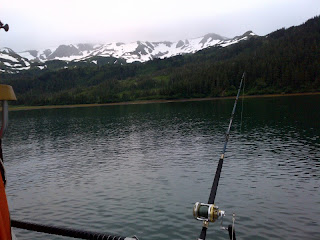 That is not just your typical "fishing trip". Bravo!