Maybe It's Better to be Lucky than Good. 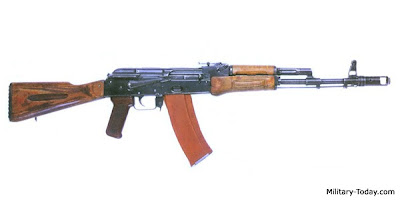 Sunday was a bad day for a lone hiker down on the Turnagin Arm. After hiking for a couple of miles, the hiker stopped to sit on a rock and have a drink of water- that's when he drew the short straw of fate and the brown bear charged. At very close range the hiker leveled his rifle and fired- killing the bear and quite probably saving his life. What caught my eye about this particular instance (aside from being a DLP shooting of a bear) is the weapon listed in the article.... an AK-74 rifle firing the 5.45x39 cartridge.  The round count was 13 with 2 of the cartridges scoring for points and hitting the bear in the head, killing it.

While most of us would agree that the AK-74 is a less than optimum weapon for bear defense, it worked in this case. I wrote some time ago about the armament among the subsistence hunters in Siberia as well as my experiences in Alaska's bush communities and among the Inupiat of the Canadian Arctic who all seem to favor small caliber, compact rifles- ballistically much like the AK-74 in this instance- and all three groups of people kill large bears (among other things) with regularity. Maybe you could factor in something else there- tremendous skill or particular savvy since these folks live their lives in the wild and are as accustomed to dealing with a polar bear as we are to heavy traffic.

But there are other outliers you find as well. When I first moved to Alaska, three young men were attacked on the Kenai Pennisula while fishing for salmon. The best armed of the group was carrying a twelve gauge shotgun and promptly jumped in the river, lost his weapon and swam for it. His buddy fired his sidearm several times- killing the bear. The weapon of choice? A Glock 9mm. Hardly confidence inspiring when you consider the 9mms abysmal reputation as a man stopper, much less effective against a coastal bear that weighed 800 pounds.

Another case last summer had a lady hiker in Denali National Park face off with a bear and kill it. She used a weapon seemingly much more powerful than a 9mm, but in the face of a bear hardly any more appropriate- a .45 Automatic. And not alone- Alaskans engage and kill bears with handguns of all types and manage to not get eaten pretty frequently. In reality though, most common pistol cartridges are hardly appropriate for killing bears at all.

On the opposite end of the spectrum you have folks who though apparently well prepared and well experienced- still get mauled. The couple a few years back on the Hula Hula River, well armed, very experienced and doing everything they could right to stay safe on their wilderness trip- were apparently mauled in their tent and killed.

Last year a moose hunter was mauled on the McLaren River- he carried and (reportedly) shot a grizzly several times with the much vaunted and highly effective .30-06. The hunter lived despite serious injuries and the bear was never recovered. Even among highly experienced bear guides, one will draw the short straw and get mauled occasionally and all of them without fail have stories of bears that soak up lead in unbelievable quantity- absorbing multiple well placed hits from .338, .375,.416 and .458 rounds without even slowing down. Some of the stories make the term "epic" an understatement.

So despite our best preparations- maybe it really is better to be lucky than good.

Back when I lived up there I remember several stories. One of my patients was a young man who lived several miles off the Richardson highway, he was hiking in hauling supplies when he was 'jumped by a gang of teenage brown bears', his words. He had a .30-06, he said 'they ate it'.

I remember the stories about Native hunters killing polar bears with a .22, always wondered if they were true.

I only had one experience, fishing across on the other side of Cook Inlet for silvers in a small stream. I had my 6y/o daughter with me and a small brown bluff charged. I had a 12ga with buckshot/slug loads, didn't have to fire it. Thank god.

There was also a story in the Anchorage newspaper about a guy moose hunting up on Ft. Rich land who killed three brown bears; each charged him in succession, he killed each one. This was sometime around 1976-79, don't remember.

This is just my theory as an armchair commando, but it seems that in bear defense situation volume of fire could be a very good or even better substitute to sheer muzzle energy.

My view is based on the fact that basically just about any bullets capable of compromising a bear's cranial or spinal integrity will decisively stop an attack. Any of the common self defense handgun calibers can accomplish this as long as they are tipped with hard-cast flat nosed bullets. Of course brenneke slugs and .45-70 bullets of high brinelle rating are even better. Hence its much better to be able to hurl lots of such projectiles accurately at a bear's head in a the short shooting window, rather than rely on one powerful shot that might or might not connect and is difficult to repeat due to its recoil and slow bolt-action manipulation. Not to mention that a less powerful weapon is much more pleasant to shoot, hence making the user much more likely to practice and be proficient in it.

Since I am an avid skeet shooter, my montrefeltro with five brenneke original slugs up its pipes will be my bosom buddy if I ever go tramping around Mr Yogi's backyard. I cant think of any other tool better suited for hitting a small fast moving target when I barely have time to aim at it.