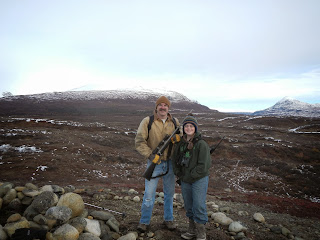 The hunt commenced in the wee morning hours since we wanted to arrive in the hunt area at daybreak and we'd need to drive nearly 100 miles to get there. Eric and I loaded the boys into the truck and away we went. On the way down I got to talk some coaching to both of the kids as well as some refreshers for Eric. We decided that Isaac should get first crack since this would be his only big game opportunity of the fall due to some out of state travel.

We spotted caribou just outside our area in the early dawn light. A fresh, this blanket of snow covered the area and the temperatures were just under freezing. The caribou migration had been very slow and the animals had taken a real beating in the late spring snow. In fact, state hunts had already closed and only subsistence tags were still open.

We crossed into a small valley- one of my most regularly successful areas and the site of a number of caribou taken over the years. We spent a couple of hours glassing there and…nothing. So we moved to a large lake that I'd been successful at previously and took a long hike among the rolling hills that ring it. The caribou in migration hit this terrain feature and even though caribou are excellent swimmers, they tend to go to shallow narrows and cross in mass. We hike back a couple of miles to such a spot and set up an overwatch on it in the hopes a migrating band would move past us. We sat there and glassed for several hours and saw nothing at all except some caribou on a high ridge top several miles to our north and a couple thousand feet up- much to far to pursue. 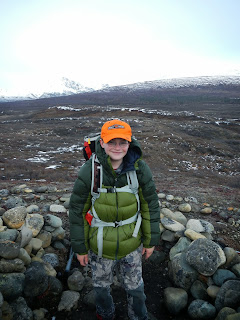 By this time the boy's enthusiasm had waned and the chill breeze had dampened their spirits and we hiked back to the truck by a circuitous route punctuated by frequent stops to glass. In the small rolling hills- the caribou could appear nearly anywhere but they chose not to. Upon arrival at the truck we met my good friend and frequent hunting partner Shiloh. He'd been hunting the area and hadn't seen as many caribou as we had. After lunch and letting the boys warm up we decided to move back to our original valley and glass there some more.

On our way back to the valley we crossed a large flat and found a large herd moving east headed into our hunting area. We planned to stage an ambush and catch them as they filtered in but they never showed up. It's long been said that if you have some inkling of what a caribou is going to do next then you know much more than a caribou so I wasn't surprised when the entire herd just failed to materialize. By this time it was getting rather late in the day and while the kids were winding down I was encouraged. The word crepuscular means that an animal is most active at dawn and dusk and many hunters who sleep in and clock out mid-afternoon are missing the best part of the day. I suggested we head for a spot a couple miles in and climb into some high rocks that I'd bagged a couple of caribou at before and wait for the dusk and see what happened.

We climbed into the perch and began to glass. The shadows had grown long when we spotted something about a mile into the valley on a small ridge overlooking a narrow lake. A lone caribou. We watched it with some interest as it would feed for a while and then lay down for a few minutes, then rise and walk around and feed some more. When it was laying down you would often lose sight of it despite the fact it was laying out on a ridge top on bare tundra and you knew almost exactly where to look.

We held a conference of war.

This was the only caribou we'd seen that day in our hunting area and it was getting late. The animal was about a mile away and even an experienced hunter would be hard pressed to make the stalk in time for a last light shot and Eric didn't have much experience and Isaac none at all. After brief discussion we decided that since this was Issac's first and last big game hunt of the season he'd make the stalk with Eric. There was no way we'd all sneak up in the animal and it was my hope that father and son would enjoy the experience even though I thought it had little chance of success. Evan and I would follow the stalk with binoculars and then after hearing a shot (supposing one occurred) we'd follow along with the field dressing gear and backpacks.

I'd never really followed a really long stalk with binoculars like this before and I've got to say I found it interesting to see the route from my perch. It was also interesting to note that from their perspective they chose several routes that I would not have chosen given my better vantage point. Apparently the high ground advantage applies as much to hunting as to war. After what seem an unbelievable amount of time- Isaac and Eric were within range of the caribou. While I would have been content to shoot the beast from a couple hundred yards away, they kept in going until they were just 30 yards away.

The caribou stood up and looked at them in alarm. I was pretty sure this was over as the caribou bolted. I was sure that Isaac would be thrilled with the stalk and getting so close to the animal. The caribou had other plans though and after bolting straight away, circled back and stood on the ridge line at rock chucking distance from the two hunters giving Isaac a quartering to shot.

Oddly, through the glass I saw the recoil of the shot before I heard it and saw the impact to the caribou who broke into a death run. After perhaps 40 yards the animal's legs buckled and tumbled down a small ravine and was still. The cow was shot through the lungs and the bullet severed the large artery in the back haunch- the animals reaction was one of pure instinct and brief. 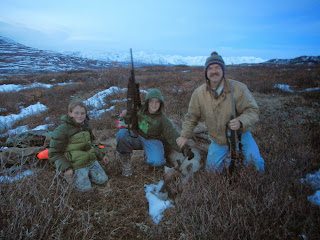 Evan and I gathered up the packs and headed to them just as the sun had vanished. The wind had picked up as the earth cooled in the high mountains and I was sure we would finish this by headlamp and flashlight before we got all the meat back to the truck. I surmised that it would be a long night and I was right. We would arrive back at the pickup just shy of midnight with both boys bloody and exhausted from fighting the alders in the dark with heavy packs and I've got to admit I was pretty tired as well. 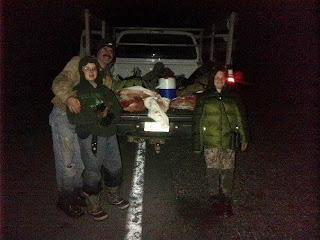 Isaac unloaded the rifle and was placing it in the case and remarked the it had a lot of scratches and it was filthy. Seeing the look of pain on his face when one realizes that a new prized possession has gotten a new nick, I just grinned at him and said, "That's what you got it for- don't sweat it. You and your rifle did well…You're not planning on opening a museum with it are you?" He just gave me a little exhausted grin.

Both kids would be fast asleep in the back seat of the truck long before we got home, a very good day for a certain new hunter.