A few weeks ago I wandered into the big Hook and Bullet store up in Fairbanks with instructions from the wife to go get myself something that goes bang as is her habit from time to time when fiscal matters are sunny enough to allow such a purchase. Of late, my exclusive interest in shooting sports revolves exclusively around high powered hunting rifles.

I looked around at length at the rack. I'd been interested in trying something new for a while now, something smaller bore and excellent accuracy with limited recoil. A rifle meant for sheep and caribou up high, mule deer and antelope, maybe those spooky Coues deer living into the big canyons of the Southwest. I looked long and hard at found something that I'd never had before. A Browning X-Bolt. It was trim, felt good and while I've never been much of a Browning fan this one had a very interesting appeal.

My main point of contention with American rifle makers is that they seem to over build things... certain companies excel at minimizing dimensions (Kimber's petite 84M for example), but when you buy a Remington 700 in .223, the receiver diameter is the same as for the .375 H&H. Just a lot of metal you don't really need to get the job done. I know why they do it, but it still seems out of place.

The X-Bolt has an almost European sort of aesthetic... which makes sense when so much of Browning's design team is European, a relationship that goes clear back to the turn of the 20th century. The receiver is pretty trim for a long action cartridge and sit low in the stock. The stock is also pretty trim, thin in the forend with a bit of a chamfer. The safety is where you typically find it on Brownings- on the tang and there is a well thought out chamber lock disconnect on the root of the bolt handle which allows you to remove a chambered cartridge without disengaging the safety. The safety, thoughtfully, locks the bolt- a feature I like.

There are several variety of X-Bolts in different finishes and given my proclivity for mountain hunting in harsh weather- I chose the "Stainless Stalker"...and all stainless steel metal work with a polymer stock finished in what Browning calls "Duratouch". The stock just feels nice. I picked up a model in .270 Winchester. My last .270 was a very traditional blued/walnut/ quarter ribbed Ruger that was, frankly, too darn nice to pack around in the mountains. This Browning should be better in that regard.

I picked up a set of Warne "Maxima" bases and rings. The bases attach to the rifle with 4 screws (hence the 'X' in 'X-Bolt') and while you'd think it's for strength, it's not. The bolts third lug raceway runs between the mounting holes allowing a much thinner receiver ring. Very nice. A Leupold VXIII 2.5-8x36 completed the setup which came in ready to hunt at a respectable 7.6 pounds on my hanging scale. Not a true lightweight in today's market, but still a light rifle that carries, balances and shoots well.

I began the shooting chores the way I usually do. From the bench I ran a target to the 100yd berm and loaded the magazine with 4 of the very pedestrian Federal "Blue Box" 130gr loads. I tend to start with Blue Box because I've gotten outstanding results in the past in a variety of rifles and it's, well, cheap. I fired one round and saw it land on the target 4" to the left of the centerline and I made the adjustment.

The next three rounds did this... 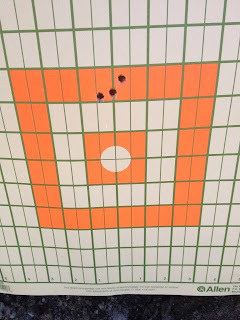 Given that benches aren't common out on the tundra, I did some more shooting and turned in this 7 shot group at 300yds...from sitting.