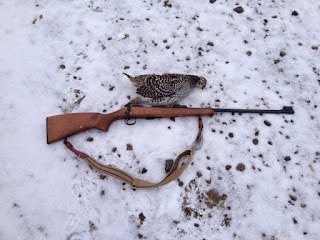 I've written several times in the past that I have a real affinity for the bolt action .22 Sporter. I cut my teeth as a wee tot on an ancient Marlin bolt rifle. These days the rifle resides at the ancestral home and technically belongs to my nephew...as if technical ever mattered much as far as ownership was concerned. Some time in my college years, I was smitten by the prospect of the .22 autoloader and had a long string of them...each a little more clunky than the last.

Finally, some time about my 30th birthday I treated myself to a real treat- a Kimber 22. Stocked in nice walnut the rifle was really too pretty to hunt with. It was pretty much the most expensive rifle I owned at the time, even more expensive than my matching Kimber 84M. But it was a purchase I didn't regret at all- that rifle literally transformed me shooting ability from talented amateur to, well, serious amateur. All humility aside- the rifle made me an honest to God rifleman.

I shot that rifle more than anything I've shot in my life.

It was the first rifle that I owned that I got good enough with to shoot up to the level of the rifle and it only came with thousands of rounds down range. The rifle would hit a dime at 50 yards with relative ease and on calm days a quarter at 100 yards wasn't unreasonable. My small game hunting became something else entirely- several hundred hares, a slew of feral rabbits and a pile of grouse fell to the rifle. If it was under something like 80 yards, it was as good as done if I had any sort of rest at all.

But like every other sad story of my life... I parted ways with the rifle to fund some project or another.

Fast forward a couple years later. My son's 10/22 autoloader was equipped with a trigger only a liability lawyer could love. I decided that I had to rectify the bolt action sporter mistake for good.

A visit to the local hook and bullet had just the remedy for my disease- a CZ model 452, this one a "training rifle" with a long barrel and a tangent rear sight. I took it home immediately. Not a cheap piece by any means- the Czech economy is still stagnant and the meager asking price is a genuine bargain for a rifle stocked in wood and machined out of blued steel. At first I mounted a Nikon 4x on the rifle and found that it had the wonderful accuracy the CZs are known for- not quite what my Kimber would do...but close. After a while I decided to try the tangent sights and once the scope was pulled off I fell in love again with shooting an iron sighted rifle. I took it hunting...the squirrels and ptarmigan out to ranges of 50 yards were simply in trouble.

Why bring this all up?

Well, shooting with a rimfire is one of the best ways to get good at shooting, but only if the rimfire feels like a centerfire and you shoot it like a centerfire. In the not so distant past a lot of folk's rimfire shooting was loading up a high capacity magazine in something semi-auto and just letting it rip downrange. I've seen it far more than enough to know that it's common. A perusal through the gun rack will reveal a lot of rimfires that are made to look like submachine guns and a lot of other stuff.

Fun maybe, but I have a hard time taking it seriously.

Especially given that in the post-Sandy Hook era finding any sort of quantity of .22LR ammunition is next to impossible. I've not personally seen more than a few boxes of .22 ammo on the shelf in the last 4 years and all priced roughly double. Burning that up in what amounts to a playtoy makes no sense to me.

But one at a time, through a good rimfire rifle...that'll stretch that $10 box of 50 into something worth the coin. The CZ is certainly a good rimfire rifle. Out of a box of 50, I've missed exactly 2 shots at game- that's a lot of protein for the price of a box, even at current prices. Perhaps its time we re-evaluated what the .22 is.... a serious gun for serious hunting and target shooting.
Posted by hodgeman at 10:04 AM

I've been giving a lot of thought to getting a nice, .22lr bolt-action. I have a hard time justifying it, since my .17hmr really suits most of my rimfire needs (although it's not a great, meat hunting rifle).

Most of my small game hunting has been relegated to the air rifle these days, which is one more reason the .22 is not higher on the to-do list.

But that CZ 452 is a sweet looking option.

I'll be honest...finding ammo is enough of a pain that an air gun is on the short, short list of things to acquire.

I don't think an air rifle is quite the equivalent of a .22, but it's close enough for most of my uses that it'll do fine. I use an awful lot of CB and Shorts for pest control, a decent air rifle is probably a little more potent than those.

I love the PCP, both for power and accuracy, but it has its own drawbacks... not the least of which is the cost. The other is keeping it charged in the field if you're on the move and doing a lot of shooting. I also think, after a lot of conversations with folks who know a lot more about air rifles than I ever will, that the .22 would have served my purposes better than the .25.