The early hunting season in Alaska starts in the first week of August in my area. The weather is generally warm and dry with long days and short nights. The moose opener was a bit of frustration, we saw plenty of bulls but none in the limited hunting area we had. When the second week opened, we moved into caribou country. My family and I pitched a camp late on a Thursday night and my partner, Gary, would be down after work on Friday evening.

I awoke pretty early at dawn. It must be said that dawn in early August is on the order of 5:00AM and while the family slept soundly, I snuck out to the edge of camp with my spotting scope, binoculars and a big mug of coffee. I've habitually been an early riser in a household of late sleepers and I've come to love those early mornings drinking coffee in the stillness of a sleeping house. In the field however, that first hour of the day is magic hour. I saw several cow moose milling about and even more caribou feeding on the ridge tops a couple miles to the north. There was no need to go after them, I was at peace just sitting here with the world waking up around me.

After a period of perhaps 45 minutes or so and getting near the bottom of my coffee, a lone caribou- a  small cow- appeared out of the brush at something on the order of 500 yards away. She was making pretty good time and would traverse to within a hundred yards or so of camp as she worked her meandering way down the drainage. I had plenty of unhurried time to study her. She was fairly small and I debated shooting or not, but then again, small cows tend to be some of the best eating caribou out there. I decided that having fresh meat in camp would be a great way to welcome Gary to the start of the weekend and my friend Brian was supposed to be in the area that evening as well. Nothing like starting off a weekend of hunting with fresh tenderloin.

I chambered a round.

By this time the caribou was in some head high brush about 150 yards from camp. I could approach closer without being spotted and I eased my way off the hilltop and planned to intercept the caribou as it popped out of the brush in a marshy bottom. Several agonizing minutes later I was in the sitting position, looped up and ready as the caribou went perfectly broadside as she exited the brush. I was moving in slow motion when the caribou was already full steam. She spotted me sitting there and leaped four or five times in alarm- that four legged spring much like an antelope or gazelle and was apparently going to flee the country.

I did the only thing that occurred to me at the moment- I whistled. In some part of the quadruped brain there is this unusual instinct that deer, caribou and moose all seem to exhibit. When startled they tend to run a short distance and then stop fully broadside to look at what spooked them for perhaps a second or two. At my low whistle, the cow stopped and looked. Perfectly still and perfectly broadside at a mere forty yards. I settled the crosshairs on the neck- the only deliberate neck shot I've  taken in years and years- and pressed the trigger. 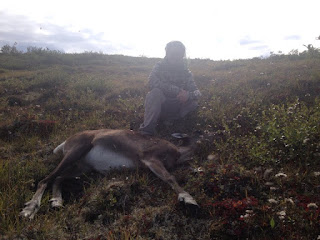 The results were as instantaneous as one would expect. The rifle cracked and the caribou fell stone dead in a pile, perhaps as clean a kill as one could hope for. I approached the animal and saw that the bullet had done its job. The .300 on a body shot would have wrecked the carcass at this range and I didn't want to waste a scrap of it. The shot had hit high in the neck and I would loose a little burger, but all the other eating parts were pristine. I walked back to camp and roused the family. neither had heard the shot and were quite surprised when I told them we had a caribou to butcher.  When made quick work of it and finished just as the heat of the day caused the bugs to hatch.

It was the start of a great weekend.