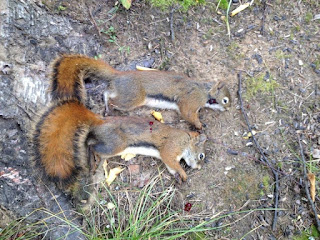 I have a long running war against The Red Menace aka Red Pine Squirrel.

It's not that I hate them per se, but in the north country the lowly pine squirrel plays a huge part of the boreal ecosystem. Enough so that their numbers and reproductive rate can easily push them from "common" to "plague" status. I'll say outright that all the squirrels I've killed were completely legit- AK has no limit and no season on squirrels for either hunting or trapping, and unusual for here, no harvest requirement. I grew up hunting squirrels back East. Big tree squirrels that made great table fare and a long days hunting might bag three or four. Up here I can shoot three or four before I finish my first cup of coffee in my PJs off the front porch.

Our last winter was a mild one, with a bumper crop of pine cones and while I enjoyed it immensely, I knew the shoe would drop.

The squirrel explosion happened. While I'm sure some readers will take offense, I'll be happy to point out that red squirrels are a pest of the highest order. They'll wreck a bird feeder in about 3 seconds, they'll tunnel under your foundation, the get into the attic and pack off your insulation. I've even had them destroy the wiring harness of a jeep. Most rural homeowners do what I do- shoot them. Some folks poison them but that has lots of unintended consequences so I discourage it at every opportunity. The goal isn't exactly eradication, but to at least thin the numbers enough locally that you're not overran. 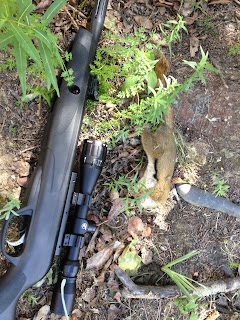 My favorite piece of equipment for that has long been the lowly .22 Long Rifle firing the anemic CB Cap. Squirrels are neither a long range target, nor particularly hard to kill- in fact, the 29gr conical bullet lumbering along at 700fps is just about perfect. Low noise, less danger of shooting through the neighbors house- the CB makes short work of a red squirrel sitting on a branch 20' overhead barking his head off at you. You get an exit about 1 in 5 but the residual energy is pretty low and the bullet generally hits the tree behind.

That is until the latest ammunition paranoia swept the country. Locally available supplies become nonexistent and have been for several years now. A local scalper was asking $100 for a 100 round box. A price at which I hope sees him holding on to them for decades to come. Once the last squirrel fell to my last CB round, I knew something had to give.

Enter- my faithful and observant spouse. For Father's Day she surprised me with a pretty thoughtful gift. A GAMO .22 caliber air rifle, complete with a scope and a noise suppressor. Note, that suppressors for firearms are highly regulated in the U.S.- not on an airgun however. Accuracy was surprisingly good- good enough for backyard pest control for sure. The amount of noise generated makes even the whisper quiet CB seem loud. The noise generated sounds like anything but a rifle shot. It will fire a .22cal pellet that weighs 14g at about 900 fps. While I wouldn't rate it nearly as effective as the .22LR round for small game, it is certainly the equal of the CB round and more than sufficient for back yard pest control. 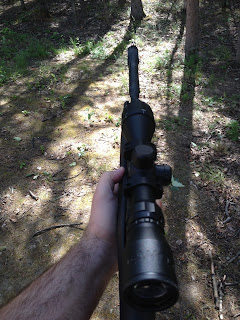 After shooting a couple dozen squirrels I noticed a tendency to undershoot them with the scope. The pellets looping trajectory combined with the considerable distance between the bore and centerline of the scope made undershooting at close range pretty easy as well as overshooting at medium distances. For hunting at variable ranges the scope was just a handicap. I can hit squirrels with open sights a lot farther than I'd shoot one with an air gun.

I simple scraped the scope off and called it good.

To date, several dozen of the plentiful pests have fallen to the air rifle and I've really come to appreciate it. In all fairness, it has sparked something of an interest in air guns and I'm already looking at one of the pre-charged guns....
Posted by hodgeman at 3:08 PM

Good to see you with a pellet pusher,
but have you thought of a .25 pellet in a 25-06 case powered by a shotgun primmer?
Just because you can.
SBW

Lots of interesting reading about such an item and its performance.