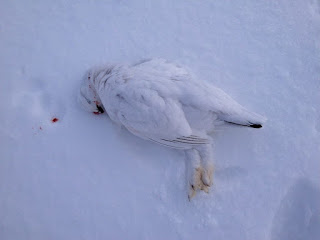 I've gotten the question in email now a few times and in person a lot.  So I'll post this out there.

Residency is slightly complicated but basically requires moving to Alaska and living here full time for the previous 12 months. Residency comes with a lot of benefits for hunters, the first being that a full bore hunting/fishing/trapping license is a mere $62 and lot of areas and tags are resident only.

For the Non-Resident folks-

I often get asked by people who relocate here about ponying up the substantial dollars for a non-resident license while they're counting down the 12 months to residency. Often thinking they'll get out there for an early win on moose or caribou. Well, a non-resident hunting license is $230 and you'll need a non-refundable moose tag for $400 (or a caribou for $325).

In short- don't. The rationale, few folks can hit the ground running after moving here. Moving here can be a bit daunting and a whole lot expensive. You'll not likely have much (if any) scouting, you'll be unfamiliar with the terrain and regulations and your chances of success are pretty slim without some inside help. If you want to hire a guide then of course all bets are off and you should buy a non-res license.  If you are a non-resident alien- you'll need to hire a guide for all big game anyway.

So far, a few folks have taken this advice and most reported they were happy to have done so. One gentleman reported he couldn't manage to find a grouse, much less a moose, his first year here and was happy to have not spent the substantial bucks for a big bowl of non-res tag soup. His second year he had a new resident hunting partner introduced by a mutual friend and some good ideas about where and how to hunt and was successful as a first year resident.

Just some food for thought.
Posted by hodgeman at 9:57 PM