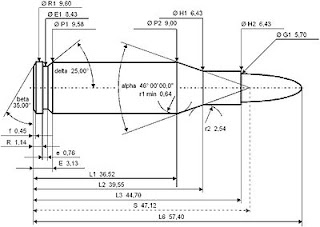 I recently received a piece of correspondence asking my thoughts on the .223 as a big game rifle. I've written briefly on the subject a couple of times and it seems that you can't get on a hunting or shooting forum without seeing this topic come up repeatedly. I only frequent a couple of hunting forums regularly but the topic is a perennial one.

I could approach the topic from the usual way- which is to procure a whole bunch of data and provide a detailed analysis in regards to the foot pounds of energy at differing ranges, trajectory tables and so forth. Since I've actually shot big game with a .223, I could provide an anecdotal example or two as well. But, I'm not sure I really want to do that.

I'm sure the debate will carry on about using the .223 for deer regardless of what I write about.

I will acquiesce that modern bullets have done nothing but improve the .22 centerfire cartridges, in fact all cartridges are more effective than ever with the excellent bullets we have today, but I have a hard time accepting the .223 as a deer cartridge. I've shot a number of big game animals with the .223 and I have to admit, I wasn't really impressed. At close range, with a good bullet... it worked. I also lost the only deer I ever wounded to the .223 as well. I've seen a deer shot with a .22-250 that dropped so fast that I suspected a spinal hit but it was a behind the shoulder lung shot. I could talk about all that stuff in great detail.

I'd like to reframe the question from being about the .223 and other .22 centerfires to virtually all other larger centerfire cartridges out there. What you notice is that when you look at the .270 or the .308 or one of the endless 7mm cartridges.... no one questions their effectiveness as a big game rifle. No one. People will argue about which one is their favorite, or the most accurate, or the most efficient, but not their effectiveness. Elmer Keith loathed the .270 (or at least its most vocal proponent- Jack O'Connor) but still used the cartridge for mountain goat. Even when you step down to the mild .243 Winchester, no one really questions whether you're talking about a deer rifle or not. The only debates I've seen are when you get to elk or moose, but even big Western mule deer are seen as .243 country. Most states that regulate a minimum cartridge start with the 6mm/.243 bore. Why? Because it works. I've seen a few deer and a couple of caribou readily decked with the .243 Winchester.

It's my suggestion that the absence of argument about those standard bore rifles should speak very loudly when choosing a cartridge. Want to kill deer? No one will tell you the .270 won't do the job. Want to deck an elk? Say .30-06 and you'll get little disagreement. Want to kill a caribou? Carry a 7mm and no one will bat an eye. Respond with a .223 for any of those animals and people will be doubtful. With good reason. In Craig Boddington's "North American Hunting Rifles", he pretty well sums it up as "not big game rifles" and leaves it at that. Cooper derisively referred to the .223 as a "poodle shooter". Many people with far more experience than I have are leery of the .223 on deer sized game.

In my experience, the .223 can work...but you need a good bullet and you need to get close and you need to be really picky about your shot. You might be in for a long tracking job or you might want to take head and neck shots. I'm of the opinion that if you need to make those kinds of stipulations, you really should be thinking about a heavier cartridge to start with. Deer are relatively easy to kill and a .270 will pretty much be forgiving of bullet construction and poor angle, but not the .223. In the bigger cartridges you can argue about what works better but they all work. Virtually any of the standard "deer guns" with a soft point bullet will kill most big game dead as Sunday's fried chicken. I can't say that with the .223.

I've never seen the point of relying on the absolute bare minimum cartridge when shooting for blood when far better choices are so readily available.
Posted by hodgeman at 3:42 PM

Ever since Zumbo was dismissed we have been hearing about how everyone wants to hunt with an AR. I have no problem with it, just get the AR-10 if your going to be shooting big game.

Good piece, Hodge, and I agree... it doesn't make sense to me why some folks insist on using a marginal caliber when there are so many better options available.

I do think a lot of the support for the .223 comes from the folks who hunt from blinds, over bait or food plots, where relatively close-range precision shooting is nearly guaranteed. Unfortunately, a lot of folks who read or hear about the .223's performance on game haven't made that connection, and they seem to think, "hell, if a guy in Texas can kill 300 lb. hogs with a .223, then it should work on hogs in CA too, right?" Never mind that hog hunting in CA, where shots are often taken from field positions across-canyon or over barley fields, is nothing at all like making 65 yard pot shots from a TX shooting house.

I could go on. I probably have.

Yeah- I think that folks tend to think of velocity and energy as static across the useful range of a round rather than something that decays quickly. When you survey available ammunition for the .223, not many break 1000 ft/lbs at 100 yds and those that do, don't by much. While translating energy into meaningful data can be problematic- it does represent the potential for wounding if nothing else. Ballistics folks have maintained that 1000 ft/lbs at the point of impact is what it takes to cleanly harvest a deer...so under a 100yds the .223 performs reasonably well. Past that, and performance degrades fast. Most are in the 700s at 200yds and around 500 ft/lbs at 300 yards. As you said- what'll deck a hog at 50 yds, isn't all that hot on a cross canyon shot in open country.

On medium game animals- you just run out of energy (and wounding potential) long before you run out of reach. For comparison's sake- the meager .243 Winchester with a 100gr bullet is going to carry 1000 ft/lbs to 400 yards.

Good article. I think a good deal of this coming up definitely owes itself to the popularity of the AR-15 platform, basically looking to justify the use of a rifle they already own. I've had a good number of people ask me about getting started in hunting, usually pig hunting, that already own one of these rifles and want to use it. Lack of experience just magnifies the limitations of the round, which is marginal even in the most skilled hands and controlled conditions.

I often have been on the other side of the caliber debate. I actually tend to be a fan of moderate calibers- I think that at practical, real world distances a .270 or a 7mm-08 will cover most of the ground of a 7mm Remington magnum does, or .30-06 to a .300 Win Mag. Certainly debatable, and it has been, but every single one of those is throwing at least double to triple the size projectile of a .223 and you can't fake that. There's a point you might not gain that much just by adding velocity, and there's also a point you fall off the cliff in the other direction and the .223 is pretty solidly off that other end. There's a reason that most deer rifles are .25 to .30 cal.

People back in the day got by shooting a lot of marginal calibers, .32-20's and .25-20's, because that was what they had, but the fact is they also lost a lot more deer than we would consider acceptable today. And that's with folks back then probably knowing their limitations a little better than they might now.