Archery as Therapy for the Malaise of Middle Age

I'll say at the outset that this is pretty different for me. I've recently taken up archery and have been enjoying it...well, the point of this piece is that it is more than enjoyment. It's therapy.

Between my professional life as a project manager/planner, an organizational restructuring project, technical writing, a pretty well received op-ed, academic concerns and venting my spleen on political matters in print- it's left my nerves frayed.

While I'll not bore the reader with an exhaustive discussion of my work life; being the H.M.I.C. of dramatic change is not easy. People resist even positive change and are deeply suspicious of even the purest motives that come with evidence. Change that doesn't come wrapped in such gilded bona fides- well, you can guess. The end of the work day usually ends with a long sigh. On top of that, there is the usual technical writing that accompanies that sort of work. I like it. Sort of.  It's writing, but it's dry and devoid of character by design. I've previously compared it to working in a dusty barn- try as you might you can't help but choke on it. It makes me yearn for the days I worked in construction- at the end of the day my body was tired but my mind was clear. My current effort entails sitting on my ass for ten hours and leaving too tired to think.

While I'll not go into a political discussion (it's neither the intent nor scope of this blog) I will say that the current contentious environment is taxing on the mind. I'm much too old to resign the political arena to my elders and much too young to resign myself to death before I feel the effects of the decision making of the political class. I've written, briefly about it here and there, but I've had to take on the role of outside observer lest it make me absolutely crazy. I did write an opinion piece about the current public land debacle that got picked up by the Anchorage paper and was pretty well received. It was widely circulated on conservation list servers and I felt pretty good about that. Still, in politics it seems like I worry excessively about tempests I can do little about.

Which brings me to archery.

Coming home with a bunch of conflicting thoughts bouncing around inside my head isn't really the best way to end the day. When I pick up the bow, those thoughts get quiet. The less contentious get forgotten. Pretty soon I'm not focusing on rate of return or earned value management or delegate assignments or state house bills or much of anything else of that ilk.  I'm focusing on compressing 70 pounds of draw weight energy and concentrating it onto the tip of a 30" long carbon fiber arrow. Then unleashing that energy into an equation that is both relatively simple and damnably complex with the hope of driving an arrow into a spot the size of a tennis ball some 30 yards away. And I do it over, and over, and over.

While I know nothing about "zen", I do know a little about fly-fishing. The physics are there in plain sight but do the slightest thing wrong and the whole system collapses. With the bow, drop your string arm elbow and your point of impact radically changes. Change your anchor and you may not even hit the target. Forget to open your grip and you might sail an arrow into the ethereal beyond. Shooting well requires a complete focus on what you're doing. As I've learned, if you're shooting the bow and thinking about something back at the office you'll soon be thinking about where your $12 arrow just went.

When you're at full draw you had better be all in the here and now. Unlike rifle shooting, the bow requires a presence. With the rifle, everything except my breath, the trigger and the crosshairs goes away. With the bow I have to be acutely aware of my feet, my back, my arms, my neck, the angles of my legs, the pressure of the release against the back wall. I can break a rifle down into pure math- feet per second, ballistic drop, foot-pounds of energy, time of flight. I can't do that with a bow. That's why bow ads and reviews are so full of subjective language. Non-sensical words like "shootability", "smooth" and "forgiving". Even the mathematical standard for how fast a bow will shoot, IBO speed, has almost zero bearing on how fast it will shoot in the real word. It is delightfully frustrating.

My job as a planner requires that I spend a lot of my day in the future and my endeavors as a writer usually entails a substantial dwelling on the past. As an archer however- the discipline demands being in the present.

And that's just what I needed. 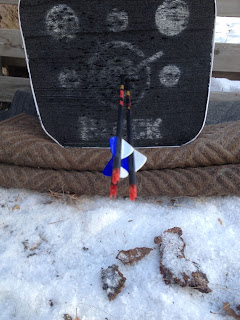 Not middle age, but I can very easily spend an hour shooting a bow, so fun! The arms start to hurt after a while though.

Really enjoy your writing and find we have very similar views on most of the topics you've taken on. On the subject of archery, I took up the sport just before my 50th birthday. After a stretch of military service along with being involved in hunting and shooting sports of all kinds, I didn't really have high expectations. I mostly wanted to get access to some of the archery seasons. And then it happened. I found myself being completely drawn into an endless pursuit of perfecting my gear and my form. In the course of a couple years, I went from complete novice to a reasonably competent 3D tournament shooter. Along the way I discovered that spending a couple hours on our local field course was great therapy. It helped my to shed the worries of the week and get my head on straight. Almost like a clean reboot. In the end, that is what I truly treasured. Unfortunately I took a bad fall on an elk hunting trip. Neck and shoulder injuries forced me to stop for awhile. I'm over the worst of it now and thinking about hitting the gym, dropping the draw weight on my bow and giving in another try. Stuff is piling up and I really need to go for a walk in the woods with my bow.